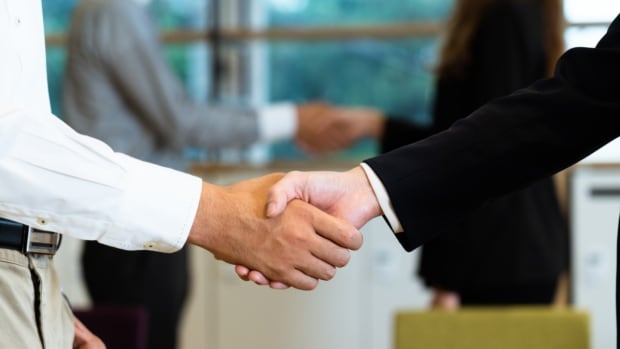 Coming to grips with the handshake’s uncertain future


When’s the last time you stuck your hand out to greet someone?

Handshakes were one of the first things to go, as people sought to avoid passing on or receiving deadly COVID-19 germs at the heart of the pandemic.

But with immunization growing, some wonder whether the social etiquette will ever return, and what to do when meeting someone new.

Jim Davies said he’d be happy to see the grip go away for good. The Carleton University cognitive science professor is also immunocompromised and said before the pandemic, refusing to shake someone’s hand can cost social capital.

“I was on a first date with a woman and I introduced her to my friend. He stuck his hand out and she just said, ‘I’m sorry, I don’t shake hands.’ I thought, ‘oh my God, what a terrible impression,'” recalled Davies.

Now, he thinks it would be different.

“Refusing to shake hands will become much more acceptable,” said Davies, adding that acceptance may even extend to casual mask wearing. “People will get it.”

WATCH | Etiquette instructor on why the handshake is so important:

Etiquette instructor Julie Blais-Comeau talks about why the handshake is so important and why it might make a comeback after the pandemic is over. 1:44

Still, Davies doesn’t think that will stop people from returning to the handshake when COVID-19 case numbers drop.

“When there is a lull in the pandemic and we feel fairly safe, people will go back to shaking hands,” predicts Davies.

Julie Blais Comeau agrees that the handshake will eventually make a comeback — but not for everyone.

The etiquette advisor has taught University of Ottawa students about business etiquette, and government officials on workplace interactions.

She said the handshake has become so central because of what it can convey in just a few seconds.

“[It says] I’m here with intentions of peace, with honour and transparency,” explained Blais Comeau, adding that’s why it’s become the so-called ‘money shot’ at G7 summits for world leaders and politicians.

But etiquette evolves, she said.

“It’s not stagnant and the pandemic is proof of that.”

Instead, Blais Comeau recommends germ-free alternatives to help overcome the awkwardness between two strangers navigating each other’s comfort levels in the new normal.

“I like the ‘namaste,’ or a wave. A little bit of a nod, or a mini bow,” said Blais Comeau. “It’s a salutation. It’s a greeting. It’s a recognition of the other.”

Blais Comeau said her favourite move is the deconstructed ‘namaste.’

“I’m joining my hands together, palm to palm … just under my chin, at about my torso, and I’m looking at the other person. I am saluting the other person,” she demonstrated.

Let’s all recognize those first few times are going to be awkward.– Julie Blais Comeau

Blais Comeau said that even if others slip back into handshaking, you don’t have to. There are ways to gracefully decline someone’s outstretched hand.

“Say something like, ‘you know, I still have a little bit of a cold,’ or ‘I feel that something’s coming on. So it may be best if we don’t shake hands.'”

And if you have to dodge the two-cheek kiss?

“Feel free to use a sentence like, ‘you know, I’m still evolving throughout all of this. For now, we’re just going to stick to an acknowledgement, and I’m so happy to see you. It’s been a long time. How are you?'”said Blais Comeau.

The important thing is acknowledging the other person through eye contact, she said.

“Be empathetic, not judgmental. Let’s just be benevolent and give the other the benefit of the doubt,” she said.

And the most important: be understanding.

“Let’s all recognize those first few times are going to be awkward.”