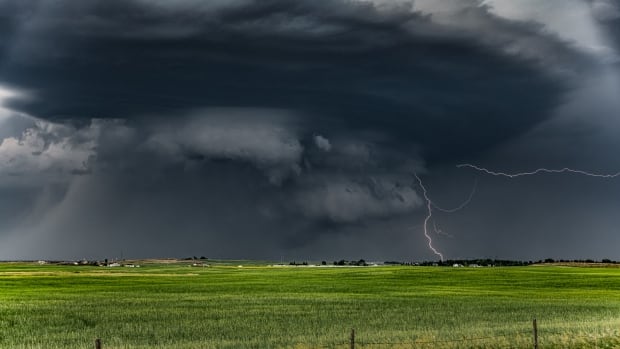 
CBC Alberta and Saskatchewan have teamed up for a new pilot series on weather and climate change on the prairies. Meteorologist Christy Climenhaga will bring her expert voice to the conversation to help explain weather phenomena and climate change and how it impacts everyday life.

Severe thunderstorms and summer go hand-in-hand on the Prairies. And it’s not your imagination that such weather events have been getting increasingly catastrophic over the past decade.

In the prairies, the last few years have been marked by severe storms. Calgary alone has seen hail, funnel clouds and lightning strikes, with downpours that turned roads into rivers and stranded motorists in their cars.

Climate change is increasing the risk of these extreme weather events.

In fact, “extreme weather presents the most immediate climate risk for the Prairie provinces, as is evident from the catastrophic events that have taken place over the past 10 years,” according to a report from Canada in a Changing Climate, a federal government-led partnership of climate change experts.

But where do these severe storms fit into the climate change puzzle?

The answer is complicated. In some places, science shows a clear cause-and-effect. But other elements are more up in the air.

A major factor of climate change on storm severity is the impact of warmer summers on our water cycle.

Warmer temperatures mean more evaporation (where liquid water is transformed into a water vapour) and transpiration (where water is sapped from vegetation). Because warmer air can hold more moisture, our storm systems will have the potential for heavier rainfall because of all that extra water.

Systems like our Alberta Clippers (those fast-moving, low pressure systems that rip across the prairies), or atmospheric rivers (those channels of moisture in the atmosphere that bring constant rain to the coasts), or even our run-of-the-mill thunderstorms could see those risks of higher rainfall amounts.

So though we know that climate change is increasing our risk of drought conditions and wildfire, it also increases our risk of high precipitation events.

And even though it sounds counterintuitive, these extremes can exist simultaneously.

“Given the vast size and hydroclimatic diversity of the Prairie provinces, it is not unusual for parts of the region to be experiencing drought and wildfire at the same time, while other communities are being flooded,” states the Regional Perspectives report from Canada in a Changing Climate.

Think about spring 2011 when a wildfire ripped through Slave Lake, Alta., while further east, a one-in-350-year flooding event devastated properties near the Assiniboine River in Manitoba.

Thunderstorms and climate change are complicated

Although we see a clear link between climate change and damaging rainfall events, the link between the other impacts of severe thunderstorms — like hail and tornadoes —aren’t easy to predict.

“When it comes to severe convective storms, we don’t have such a high confidence,” says Xuebin Zhang, a research scientist with Environment and Climate Change Canada.

“We don’t really have lots of good observations to help us understand what has changed in the past. So we don’t know if severe convective summer storms have increased or decreased.”

Thunderstorms are common occurrences in our summers but they need specific conditions to form.

They like an unstable environment, they need moisture and they need something to get them started. In the weather world, we call that a trigger.

That trigger is anything that can get the warm moist air near the surface moving upwards. Often during the summer, a weather front will do the trick to lift moisture-laden air high into the atmosphere.

That rising air forms the thunderstorm clouds that can be seen either as a singular standalone storm cell, a line of storms — or even the ominous and hazardous supercell storms.

The latter — thunderstorms that have a rotating updraft — are often our tornado-makers. Supercells form in storms that have strong wind shear, or a change in direction or speed of the wind as you go up in altitude.

Our problem is this. We don’t really know how climate change affects wind shear.

“Vertical shear, or how wind changes vertically in the atmosphere, is something that no one has a good handle on,” says Zhang.

“So we simply don’t have confidence about what a future might look like with regard to this.”

And attempts to learn about climate change and its effects on tornadoes are hindered by the nature of the storms themselves. Quite often, they’re too small and short-lived to properly model.

“A tornado has a very small spatial and temporal scale. When it comes to tornadoes, you need to have a climate model that’s capable of running at a kilometre resolution or even smaller,” says Zhang.

“We don’t have the computer capability at the moment to produce this kind of simulation at a larger scale that can give us an account of the future climate change projections.”

So while it’s safe to say tornadoes aren’t going to disappear anytime soon. But when it comes to the impact of climate change on these supercell tornado-makers, the answer is literally blowing in the winds.

Our planet is changing. So is our journalism. This story is part of a CBC News initiative entitled “Our Changing Planet” to show and explain the effects of climate change. Keep up with the latest news on our Climate and Environment page.

Travel stocks are hot. But it’s not all smooth sailing