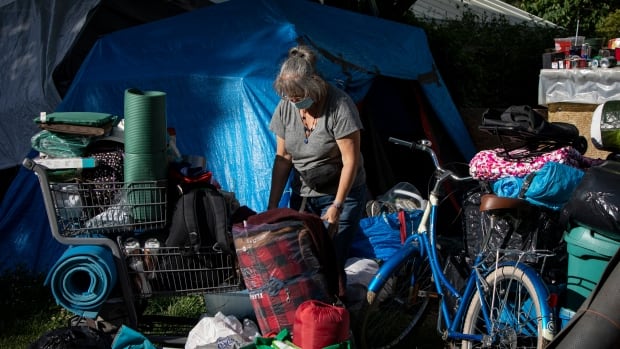 
The City of Toronto’s current response to homeless encampments is not only inadequate but is also causing further harm to the unhoused people who are most affected, a new report says.

The report by the MAP Centre for Urban Health Solutions, looks at the supports available to people living in encampments last year, how some of those services were helpful and also ways they could be improved.

“The biggest thing people needed and wanted was permanent housing and that was the thing they did not get,” said Zoe Dodd, a community scholar with the centre.

The report, released Friday, follows the controversial eviction of homeless encampments from three Toronto parks in the summer of 2021. Many unhoused people chose to live in those encampments rather than risk contracting COVID-19 in the city’s shelters. According to the 83-page report, 127 surveys were conducted, along with 23 interviews with current or former encampment residents across Toronto. Researchers also interviewed 16 outreach workers and volunteers from a variety of organizations and groups.

“I think the stark thing is that people felt pretty abandoned in terms of the help they needed, but then there were neighbours and people who stepped up,” Dodd said.

The report says the study demonstrates the community-based outreach supports provided to encampment residents during the COVID-19 pandemic were highly beneficial for their survival and well-being, and that residents had a great appreciation for the social relationships that developed with outreach volunteers and workers.

The report’s summary goes on to say housing-specific outreach, typically by Streets to Homes of the City of Toronto, was less successful at meeting the needs of encampment residents, most of whom expressed an ongoing urgent need for permanent housing options, rather than the traditional shelter and shelter hotel beds the city offered.

The clearing of the three large encampments last summer sparked an investigation by the city ombudsman. The city says in July it accepted all of the ombudsman’s recommendations in the interim report, including updating the city outreach initiative plan and better defining and communicating the role and mandate of the city’s Encampment Office.

Dodd says she believes there were a lot of misconceptions about people living in encampments, including the assumption that the people living in them were unhoused prior to the pandemic. She says only 17 per cent of those surveyed had stayed in an encampment before March 2020.

“We’ve listed over 40 recommendations we think the city should listen to, reflect on and implement. One of our biggest recommendations is for the city to divest from enforcement — where they spent a lot of money —and actually put those into community led supports and into permanent housing,” she said.

In a written statement released Monday, the city says it’s aware of the recently released report and says it welcomes feedback from the community and those with “lived experience.” It says addressing encampments is a “complex social issue.”

“The city is committed to a housing first approach to street and encampment outreach and providing wrap-around, client-centred case management supports to people living outdoors,” the statement said.

The city goes on to say that outreach staff visit various sites daily to work with encampment occupants on referrals to indoor accommodations and to connect them with a housing worker.

“This engagement process continues once a person accepts an inside space to help ensure they have ongoing support and access to services,” the city wrote.

“The city cannot force people to come inside and avail themselves of the many services offered by the city, but living in an encampment in a city park is unhealthy and illegal.”

Earlier this year, the city faced widespread criticism when a plan became public to spend $1 million in a bid to hire private security companies to patrol parks as a way of deterring encampments.

With the rising cost of rent, increasing pressure on shelters and the winter season looming, Dodd says the recommendations should be looked at with urgency. She says the reality is encampments will continue to exist as an alternative shelter option.

“Taking an enforcement approach or surveillance approach to people who are struggling to survive, it’s not the kind of compassion we want to see.”

WhatsApp stops working around the world