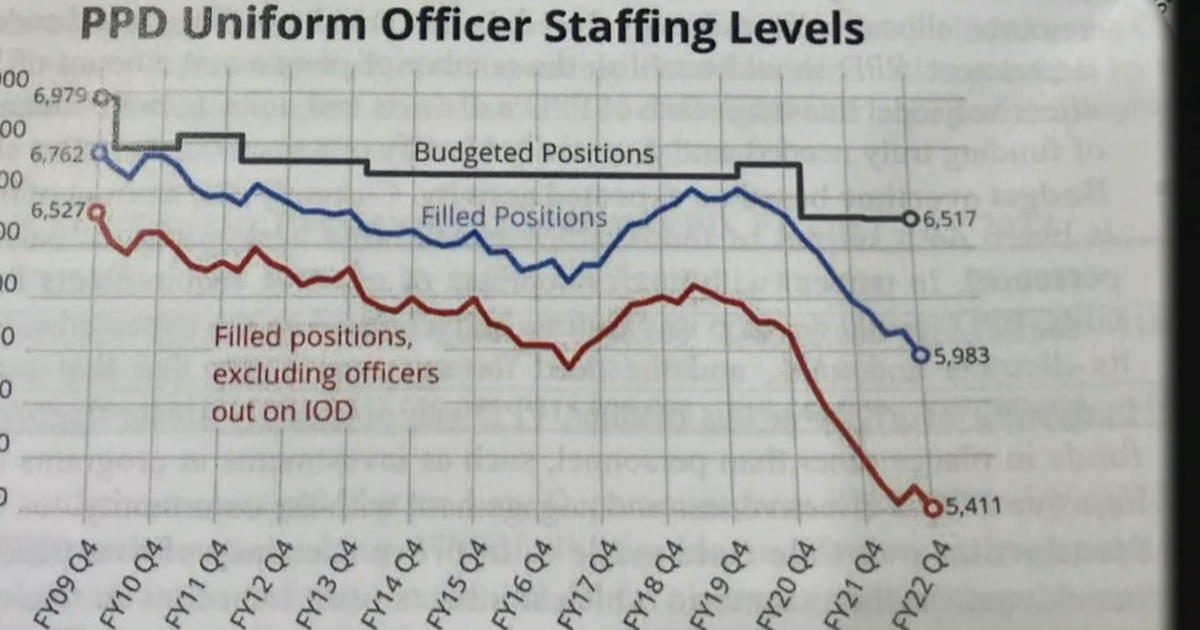 
PHILADELPHIA (CBS) — A new report from the city controller criticizes the Philadelphia Police Department for how it allocates its officers and resources, calling some of its systems redundant, inefficient and outdated.

The report took eight months to complete and it’s more than 70 pages in length and did not exceed its $300,000 budget. It zeroes in on staffing, retention and alleged disparities with 911 call times.

Controller Rebecca Rhynhart’s report reveals what she calls glaring staffing deficiencies. Some police districts have less than a dozen officers to respond to calls.

“There’s only on average between 11 and 22 officers in each district at any particular time,” Rhynhart said.

Fred Dedrick, who has lived in Mt. Airy for nearly 50 years, is alarmed by those staffing figures.

“In some districts, literally, when they do roll call there’s 11 officers available for that eight-hour shift,” Dedrick said. “Can you imagine? Two car accidents and a burglary call and they’re out of people.”

The report recommends the department revamp operations to fill internal jobs with non-officers, which the controller contends will allow for more police on the streets.

Staffing should be near 6,500. It’s currently 5,900, and that number is projected to drop further.

“If current attrition and recruitment trends hold, the total full uniform positions could be as low as 5,200 in three years,” Rhynhart said.

Of the most concerning, the analysis showed 911 response times in Black and Brown communities, where call volume is often greater, averaged more than double the wait time compared with White communities.

911 call times from 2021 were analyzed as part of a wide-ranging analysis of the Philadelphia force.

There was an average of a three-to-four-minute wait in parts of Southwest, West and North Philadelphia. Compare that to 90 seconds in the city’s predominantly White neighborhoods, according to the report.

“Where you live shouldn’t dictate how quickly police respond to your call,” Rhynhart said.

“If I call the number and no one shows up, that can be very disheartening,” Collins said.

The Philadelphia Police Department released the following statement regards to the report:

“Over the past 8 months, PPD participated in the City Controller’s Office special review of the Philadelphia Police Department which focused on overall spending practices; including deployment, as well as training and administrative functions across police districts.

The findings in this report present an opportunity for PPD to prioritize systems as we continue to focus on creating efficiencies in business practices, as well as to look deeper into staffing and resource allocation. I encourage the public to read the entirety of the report, including the PPD’s responses, as the department did not fully agree with all of the findings and recommendations.

Mitigating the wave of violent crime that is plaguing cities across the nation is among the most pertinent issues facing society today. As a learning organization, the Philadelphia Police Department remains committed to continued collaboration with all of our stakeholders as we work towards making organizational advancements that increase internal accountability, efficiency, and equity.”

Bizarre place next pandemic could come from