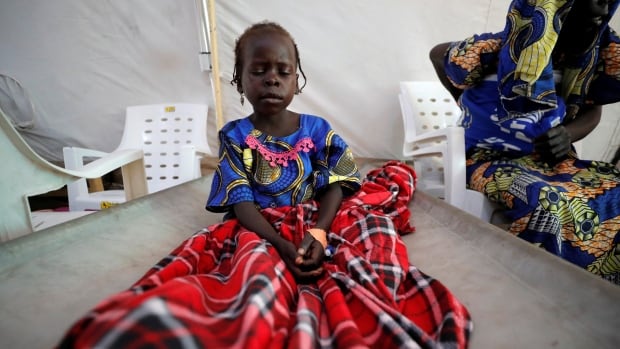 
Racing against time, a yellow tuk-tuk collected nine-year-old Salaeh Mohammed from an internally displaced persons camp and rushed him to a cholera treatment centre in the northeast Nigerian city of Maiduguri.

The three-wheeler pulled up to a white tent where two health workers in rain boots and protective aprons delicately lifted him onto a stretcher, under the anxious gaze of his mother — but the dehydrated little boy had already stopped breathing.

Nigeria’s government declared a cholera outbreak in the northeastern state of Borno on Sept. 14 after cases were confirmed in seven local government areas.

The rapid spread appears to be linked to months of unusually heavy rains that have caused floods there and across Nigeria.

By Oct. 5, the United Nations said more than 5,000 cases of cholera had been recorded in Borno, including 178 deaths. Around half of the cases were in areas with high concentrations of people displaced by conflict.

An estimated one million people are at risk of catching the intestinal illness, which causes severe diarrhea and vomiting. Commonly spread via contaminated water and foods, it leads to dehydration and death if untreated.

Cholera outbreaks are not uncommon in Borno, the epicentre of an ongoing Islamist insurgency that has displaced thousands into camps, straining sanitation facilities and potable water sources for well over a decade.

‘I got very scared’

Large puddles of stagnant water in Maiduguri, a city of around 800,000 inhabitants, accelerated the bacteria’s spread and made it difficult to contain, aid workers said.

“Compared to other years, this has been the biggest outbreak,” said nurse Augusta Chinenye Obodoefuna, manager of the treatment centre run by Médecins Sans Frontières (MSF).

She said patients were coming in twice as fast this year as during last year’s outbreak and most of them were children.

At the treatment centre, patients on rehydration drips rested on canvas beds. Worried parents sat on plastic chairs next to their babies.

Ali Mohammed, 17, sat feebly propped up against a metal drip-holder, a plaster strapped around his hand. His mother Yagana Mohammed had taken him to hospital after he stayed up all night vomiting, and they were rushed to the centre.

While it was reassuring that he was now receiving treatment, she said that night of vomiting and the arrival at the camp had been a scary experience.

“I got very scared,” she recalled. “When we arrived here the doctors ran to come check on us, they surrounded us.”

Long-standing flower mystery in Hengduan Mountains may be solved