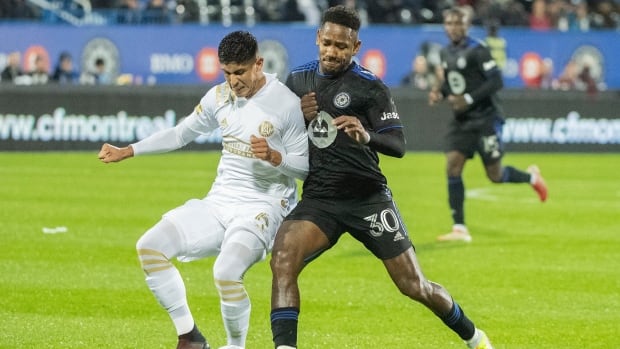 
CF Montreal secured a crucial victory in the Eastern Conference playoff race on Saturday night, beating Atlanta United 2-1 with a whirlwind second half.

Romell Quioto scored his seventh and eighth goals of the season for Montreal (11-10-7) while Jake Mulraney scored Atlanta’s (10-9-9) lone goal.

Halftime substitute Mulraney found space behind Montreal’s back line and calmly placed the ball into the bottom right corner in the 48th minute.

One minute later, Quioto converted a chance and pulled Montreal level after a slew of missed opportunities. From a tight angle to the right of the Atlanta goal, Quioto fired a rocket into the roof of the net.

Less than two minutes after that, Samuel Piette played a perfect ball into a streaking Joaquin Torres who was brought down for a penalty. Quioto stepped up and confidently tucked it into the bottom right corner to give Montreal the lead.

In the 70th, Torres had a chance to double Montreal’s lead when he was through on a breakaway, but a weak shot couldn’t get past Brad Guzan.

While they sent more bodies forward, Atlanta did very little to threaten an equalizer for the remainder of the game.

Montreal got off to a nervy start, giving the ball away in possession numerous times. Just two minutes in, goalkeeper James Pantemis gave the ball away inside the box to Santiago Sosa but was spared when the shot went wide.

It took Montreal fifteen minutes to find their first sight of goal. Quioto was played through with a clear shot but took too long. Saputo Stadium seemed to hold its breath when the Honduran stayed down following the play after picking up a knock on his thigh, but he continued to play after receiving treatment.

At the 24-minute mark, Quioto found himself with another chance after a perfect ball from Djordje Mihailovic but he put the header wide.

The game seemed to slow down significantly with neither team wanting to concede first. The 38th minute offered a rare change of pace with both teams finding excellent scoring opportunities through Sosa and Quioto.

Right before halftime, Ezequiel Barco made a mockery of the Montreal defence, leaving three defenders including Pantemis on the ground and he should have put it away, but sent the shot off the crossbar.

While the first half was a staunchly defensive affair, the second could not be further from the same.

Both teams return to action on Oct. 16 following the international break. Montreal will face off against the Philadelphia Union and Atlanta will travel to Toronto to play TFC.