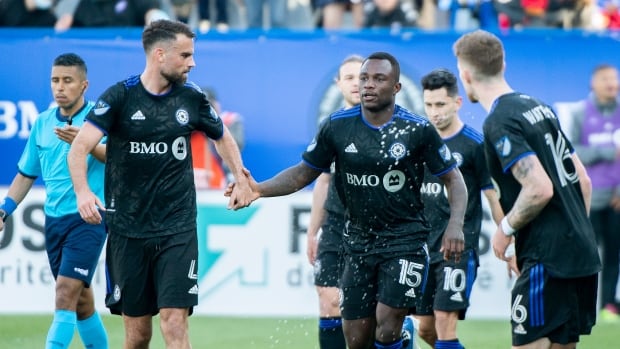 
CF Montreal dominated Orlando City on their way to a 4-1 win on Saturday to stretch their Major League Soccer unbeaten streak to a club-record seven games.

Joel Waterman, Djordje Mihailovic, Joquin Torres, and Zachary Brault-Guillard scored in the win at Stade Saputo that propelled Montreal (5-3-2) to third in the Eastern Conference.

“It’s really good that the guys are stringing together these performances,” said head coach Wilfried Nancy. “On both sides of the ball we showed and ready and didn’t end up needing to really adjust our play style because of it.”

Montreal got off to a quick start, immediately going on the front foot and pressuring Orlando’s backline. Inside the first ten minutes, Lassi Lappalainen and Romell Quioto both had golden opportunities from point-blank range but couldn’t convert.

Montreal would keep pressing and their breakthrough would come just after the 20-minute mark. During a mad scramble in the box after a corner, Waterman found himself alone in front of the net, scoring his first goal with the club.

“The guys were giving me some stick for missing the chances over the last couple of games,” joked Waterman. “It’s fantastic to see goals coming from all different areas. I’m happy to be a part of that group now and for them to leave me alone (about missing chances).”

CF Montreal explodes in 2nd half to beat Orlando

Zachary Brault-Guillard sealed Montreal’s 4-1 win with his goal in the 84th minute against Orlando City. 0:51

Montreal had a good chance to double its lead 15 minutes later when Quioto played in a perfect cross to Lappalainen all alone but put the shot wide.

Nancy was forced to shuffle up his midfield for this game given that perennial starters Victor Wanyama and Ismael Kone were unavailable due to suspension. In their first starts of the season, Samuel Piette and Mathieu Choiniere shone as they pulled the strings all game.

“[Playing with Piette] feels really good, we have great chemistry and have been training together for a while and it showed,” said Choiniere, who returned to his positions after playing most of last season at right back. “I can play on the flank or in the middle, but it was nice to return to my spot. It took a bit of a while to settle back in but once I did it was great.”

Montreal continued its assault in the second half when Alistair Johnston’s cross found Mihailovic at the back post wide open only six minutes after the restart.

For only a few minutes, the lead seemed to be in jeopardy as Orlando managed to get back in the game with 20 minutes left. Moutinho got on the end of a corner after a lapse in coverage, bringing Orlando within one.

Montreal would kill any hope of a comeback with ten minutes left when Torres and Brault-Guillard added goals in quick succession. Putting games out of reach has been a difficult process for Montreal, but this time around they seemed to be different as they not only added to their lead but did so with confidence.

“I’m very happy for that effort from the guys and I’m really proud of their performance. We didn’t panic and saw the game out exactly as planned,” said Nancy. “When we scored that second goal, I really wanted the team to keep their composure and our style of play, so it was nice to see that.”

Both teams will play again on May 14 when Montreal travels to Bank of America Stadium for the first time to face off against Charlotte FC and Orlando visits Toronto FC.