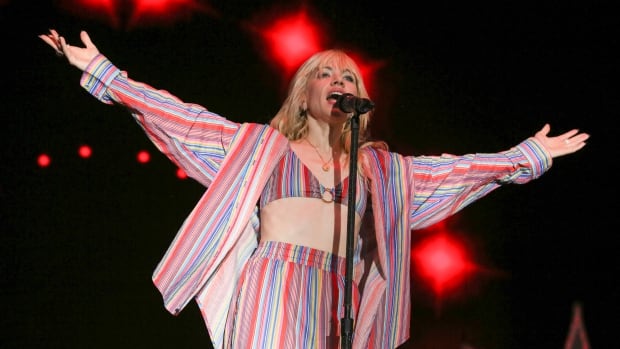 
Carly Rae Jepsen knows what it feels like to be lonely.

Her newest album, titled The Loneliest Time and released on Friday, was written during the early days of the COVID-19 pandemic, when some days felt uncertain. But isolation wasn’t the only inspiration for her sixth album.

“Loneliness itself has been a theme that I’ve been curious about getting into and exploring for my whole life,” the 36-year-old Canadian singer-songwriter said in an interview with CBC’s Q with Tom Power.

With Jepsen’s touring life, singing in front of hundreds of people, it might be difficult to think there would be moments of loneliness. But this new album is challenging this notion.

“Every human being battles with loneliness in their life. I wanted to have an album that got to tap in on what different reactions to loneliness look like.”

The pandemic also forced Jepsen’s creative process to change. Like many musicians in the industry, she was no longer touring or working on her album with others face-to-face.

“I was really excited to create, but the way I created changed because we weren’t doing these in-person writing weeks with different people — or getting to travel to the same extent, so my life really quickly, just like everyone’s did, had to adjust,” she said.

Downtime in a pandemic

The singer, who was born and raised in Mission, B.C., was stuck in her Los Angeles home and, like many others, picked up some self-professed “weird hobbies,” like making ugly scarves. But she also found herself on dating apps — something she swore she would never do.

“I talked to other friends who had been on these apps; like, everyone had a horror story. Some people had success, but there was a song idea in there for sure,” she explained.

Jepsen wrote the song Beach House based on her experience on said apps.

“They can be wonderful and sometimes the easiest way to meet people that might not be in your community. But I think that people who are out there to play a game with you and play with your feelings — those people need to be called out. This is what that song is for.”

Playing around with genres

On her new album, Jepsen noted that she had no interest in staying in a narrow path of pop.

“What excites me about pop is its endless possibilities. You can play around in the genres,” she said. “I wanted this album to feel like it had variety to it because I have variety in myself. Especially with the years of time on my side, I’m like, ‘let’s just play now. Let’s just play,’ and I want every album to feel more free to do that.”

And time has been on her side. It was 11 years ago that the singer released her hit track Call Me Maybe. The song ranked 47 on Billboard’s Greatest Songs of All-Time List and was a fun, inescapable earworm for months.

It was the first No. 1 on the Mainstream Top 40 chart in 2012, making Jepsen the first Canadian woman to top the chart since Avril Lavigne in 2007.

After the success of Call Me Maybe in 2012, Jepsen says she was given four months to come up with a followup album. While she was excited and grateful to do it, she has since learned it is not her ideal process for creating a record.

“I’m so proud of that album,” she said of her second album, Kiss. “But it’s not how I like to make an album. I explore in a few different directions, come back and feel solid with it.”

Jepsen described her work ethic at the time as hustling. She didn’t turn down any opportunities and didn’t say “no” to anything. “I felt like I was struck by lightning,” she said of Call Me Maybe‘s success.

“That experience versus the luxury that I have now — getting to take my time with an album, getting to really enjoy the process and putting time into why each song is there. And to also take focus away from a song and the beauty and artwork of an album.”

WATCH | The music video for Call Me Maybe:

As she prepares for the release of The Loneliest Time, Jepsen recounted the epiphany she had over quarantine.

“As I move forward in my career, as the pace picks up again, one of the lessons that I’ve learned is it’s good to know when to switch off the button to do the show, even if you know you feel a little off, to make time every day to switch back into yourself again.”