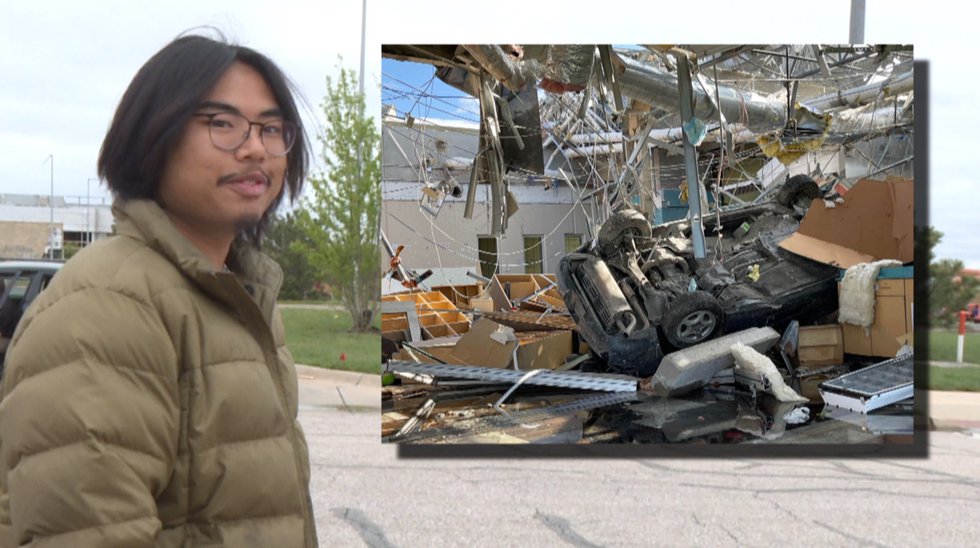 
WICHITA, Kan. (KWCH) – One week after a tornado ripped through parts of Sedgwick and Butler counties, we’re hearing more stories about people impacted that night and efforts underway to help them. This includes car enthusiasts rallying behind a local teen who lost his dream car to the tornado.

Surveillance video from Prairie Creek Elementary School in Andover shows the YMCA and cars in its parking lot being swept up, eventually hitting the building.

Friday, Eyewitness News spoke with the owner of one of those cars. Chance Nguyen said he’s grateful to be alive, but also heartbroken to have lost his dream car.

When Nguyen bought his dream car in April, he didn’t expect what happened later that month.

“My (Toyota) MR2 is right there, by the wall. You can see the back half sticking out, barely,” he said, looking at footage of the aftermath of the tornado and the extensive damage at the Andover YMCA.

The 18-year-old is counting his blessings after capturing video of the tornado heading toward the Y.

“(As) soon as you peek out the door, look out the window, you just see the funnel right there,” he said of the footage he captured.

“I just remember a gush of wind. It feels like (it) sucks the air out. And another gush of wind, is like a loud boom, sounds like a train passing by. It was a surreal experience and just a bunch of dust kicking up everywhere,” he said.

A Greater Wichita YMCA member recounts how his car ended up inside the Andover Y (and remains there). His story coming…

Nguyen captured what he saw immediately after the tornado.

“I was just like taken aback by the damage the tornado has done,” he said.

The teen took a photo of his car just before going into the Y but couldn’t find it after the tornado. When he watched his video again, he realized what happened.

“That’s my car right there. That’s just when I’m showing my face with the debris,” he said, referencing what he captured.

Nguyen only had liability insurance on the ‘91 Toyota MR2. Car enthusiasts including Cars and Coffee and Hoovies Garage are taking to social media to help Nguyen replace his car.

He’s grateful for the support and to the Y staff for getting everyone to safety during the April 29 tornado.

“It’s a blessing that we all made it out unscathed,” Nguyen said. “I was a little upset about the car, but happy to be alive

Nguyen said his car was supposed to have had full coverage, but a mistake left it with liability only. His friends also set up a GoFundMe page to help him replace what he lost.

Chelsea soccer club being sold to L.A. Dodgers owners, investors for $3B US