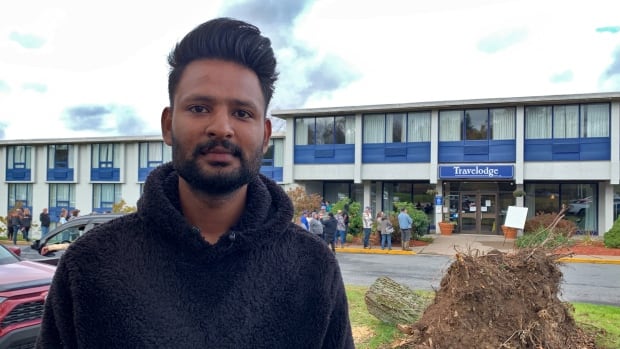 
A month after post-tropical storm Fiona hit Nova Scotia, 96 people in Cape Breton are still being housed by the Red Cross because they don’t have a home to return to.

Many of those being housed in residences at Cape Breton University or hotels are from an apartment building on Rotary Drive in Sydney. The building’s roof was badly damaged during the storm and residents had to be evacuated.

Vishal Singh was among them. He lives and works in Sydney. Coincidentally, he was also volunteering for the Red Cross for the first time.

“It’s been very, I would say miserable, but at the same time it would be a great lesson for me,” he said.

Although the storm taught Singh many lessons on disaster preparedness, it also showed him just how hard it is to find housing in the Cape Breton Regional Municipality.

No timeline for building repairs

Singh is currently living in a hotel, but wants to find a home where he and his roommates can live long term. He said it’s unclear when the apartment building will be repaired.

“[The landlord] has no idea because all are in the hands of the construction team,” said Singh.

Mayank Bhardwaj is also struggling to find a home after Fiona. He is a dentist from India and an international student at Cape Breton University. He moved to the island on Sept. 2 to study health-care management and had spent weeks apartment hunting online before he arrived.

“The accommodation prices are way too high compared to what we are able to earn over here,” said Bhardwaj.

“I think it’s just some people are trying to take advantage of the newcomers.”

Despite that, Bhardwaj managed to find a spot at the apartment on Rotary Drive before it was evacuated.

He was most recently staying at a residence at his university with the help of the Red Cross, but the move was temporary. Many of those spots will soon be needed for incoming students, but the university has offered up some space for those who wish to pay to live on campus. The remaining evacuees are now being shifted into hotels.

As hard as it was to find accommodations before the semester started, Bhardwaj said it’s now worse.

“Whenever we call someone or, you know, text someone, the place is already gone in like a few minutes. So it’s really tough for everyone to find a place to stay,” he said.

Gwen Jarabek, the Red Cross’s emergency management co-ordinator for eastern Nova Scotia, said it has been difficult for those looking to leave temporary housing and find a more permanent home.

She said the Red Cross helps connect evacuees with resources like community organizations so that they can move out of hotels.

“Time and time again when we’re having those conversations with our beneficiaries, [what we hear] is that it is difficult to find accommodations, and it does not appear in any way, shape or form to be from a lack of trying,” she said.

Housing has been an ongoing concern in the Cape Breton Regional Municipality over the past several years. A recent report found homelessness in the municipality has not improved and many renters say rent it’s becoming more unaffordable.

While Bhardwaj and Singh continue to look for homes, Jarabek said the Red Cross has enough funding to provide hotel stays for evacuees well into the new year.

After 2½ years, B.C. reopens its side of border-spanning Peace Arch park