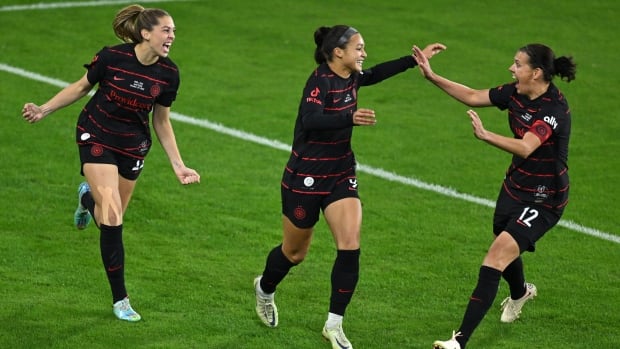 The Thorns also won NWSL championships in 2013, the league’s inaugural season, and again in 2017. The three titles are the most for any team in the league.

Canada skipper Christine Sinclair captained Portland to her third championship, all with the Thorns, setting a league record for playoff minutes played in the process. She came off in the 73rd minute.

Fellow Canadian Janine Beckie came on in the 63rd minute for the Thorns, whose head coach is former Canadian international Rhian Wilkinson, in her first year at the Portland helm. Portland’s GM is former Canadian goalkeeper Karina LeBlanc.

The Current had a costly turnover before Smith went down the field, manoeuvred around goalkeeper Adrianna Franch and deftly scored in the fourth minute.

Smith nearly had another goal in the 27th minute, but her shot went just wide. Smith is the second MVP recipient to score in the championship game, joining Lynn Williams for North Carolina in 2016. At 22, she’s also the youngest player to score in a league final.

Smith was honoured as MVP earlier this week after scoring a club-record 14 goals during the regular season.

An own goal off Kansas City’s Addisyn Merrick doubled Portland’s lead in the 56th minute. Moments later, Morgan Weaver had a shot from distance but Franch got a hand on it before it hit the crossbar and caromed away.

Audi Field was nearly sold out for the game, which was broadcast in primetime on network television for the first time.

The NWSL was rocked this month by an investigation that showed systemic abuse and misconduct, spanning multiple teams, coaches and victims.

Riley, who was fired, denied the allegations. He was one of five coaches in the league who were dismissed or stepped down last year amid claims of misconduct.

The Yates report detailed how the Thorns mishandled complaints about Riley when he coached the team in 2014-15. In the wake of the report, the Thorns fired two team executives. But some fans have called on owner Merritt Paulson to sell both the Thorns and the Portland Timbers of Major League Soccer.

Some fans at Audi Field held a sign that read: “Support The Players.”

The Thorns advanced to the championship game with a 2-1 victory over the San Diego Wave last Sunday. Crystal Dunn scored in stoppage time for the win.

The Current earned their berth with a 2-0 victory over the top-seeded OL Reign, surprising the winners of this season’s Supporters Shield.

The Current began play in 2021 as an expansion team, with many of its players coming over from the defunct Utah Royals. Last season they finished in last place in the league.