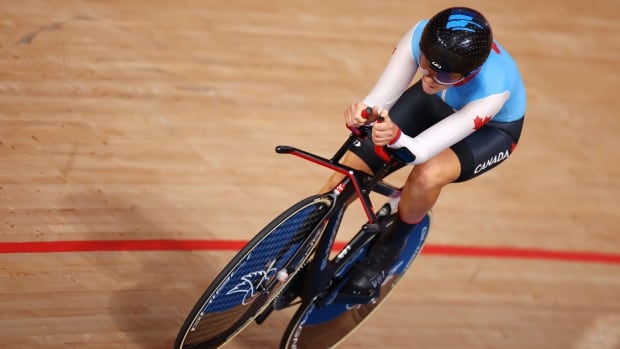 
Four athletes will represent Canada at the 2022 UCI Para-cycling Track World Championships in Saint-Quentin-en-Yvelines, France, with an equal mix of accomplished Paralympians and newcomers competing against the world’s top talent.

The four-day competition kicks off Thursday at the Vélodrome National de St-Quentin-en-Yvelines, which will also be the cycling venue for the 2024 Paris Paralympics.

O’Brien and Shaw will be chasing the podium in the C4 category, which includes riders with coordination affected to a low level on one side, in the lower back and legs, or the absence of limbs. They will both be competing in the women’s 500-metre time trial, individual pursuit, omnium, scratch race, and the team sprint events.

O’Brien and Shaw have enjoyed major success in recent years, with both reaching the podium in their impressive Paralympic debuts at Tokyo 2021.

Shaw raced to bronze in the C4 3,000m individual pursuit for Canada’s first medal of the Tokyo Paralympics, while O’Brien captured silver in the C4 500m time trial. They became the first Canadian women to reach the Paralympic track cycling podium since Julie Cournoyer in 2000, signifying the start of a new era.

O’Brien burst onto the Para-cycling track scene on home soil at the previous world championships in 2020 in Milton, Ont., where she won gold while setting the world record in the women’s C4 500m time trial (35.223). The 34-year-old from Calgary will look to defend her title, beginning with the qualifying round on Thursday.

O’Brien has witnessed a meteoric rise in the sport since transitioning from able-bodied cycling after a serious crash on the track in 2017. A former bobsledder, O’Brien represented Canada in cycling at the 2016 Summer Games. She suffered a brain injury, punctured lung, broken clavicle and cracked ribs in the 2017 accident, undergoing years of rehabilitation to get to where she is today.

In the women’s C4 500m time trial, O’Brien will look to best Great Britain’s Kadeena Cox — a Paralympic star who finished ahead of her for gold in Tokyo.

Shaw, a 28-year-old from Midale, Sask., has competed at the last three world championships since joining the national team in 2018. She won individual pursuit silver at the 2019 edition in Apeldoorn, Netherlands, and will be looking to get back to the podium in the event after missing bronze by mere milliseconds at the 2020 worlds.

A dynamic cycling talent, Shaw has also succeeded on the road, having finished the 2022 season with an outstanding eight podium appearances in eight races. She recently won a pair of bronze medals at the 2022 Para-cycling road world championships in August in Baie-Comeau, Que., further showcasing her ability to thrive on the world stage.

On the track in France, Shaw will go up against a strong field in the individual pursuit that includes Australian Emily Petricola and American Shawn Morelli, who won gold and silver ahead of her in Tokyo, respectively.

Fellow Canadian Pemble is fired up to make her worlds debut after a phenomenal summer that saw her break her own national records in the women’s C3 500m time trial and individual pursuit last month. She will be competing in the same event in France along with the women’s C3 omnium, scratch race, and the team sprint events.

“I am so incredibly excited to be selected to compete at track worlds,” Pemble said. “It has been my main goal of this season, I am especially eager to see what I can do since this is the first time I’ll be part of the world championships.”

Pemble previously represented Canada in Para alpine skiing, having competed at the 2018 Winter Games in South Korea. The competition in France is the next step toward her goal of becoming a summer Paralympian as well. The 22-year-old was born in England and grew up in Victoria, B.C.

Hayward, a 25-year-old from Quispamsis, N.B., will be making his exciting track debut in France in the C3 category after experiencing success on the road. He represented Canada at the Para-cycling road worlds in August, and won a national road title in the men’s C1-5 category in 2021.

A versatile talent, Hayward is also a former member of Canada’s national junior wheelchair basketball team. He began Para sports after breaking his neck in a triple-A hockey game, just weeks before the QMJHL draft.

In France, he will be competing in the men’s 1km time trial, individual pursuit, scratch race, omnium, and the B-team sprint event.

Action at the velodrome in France gets underway Thursday morning with the omnium, a multi-race endurance event.