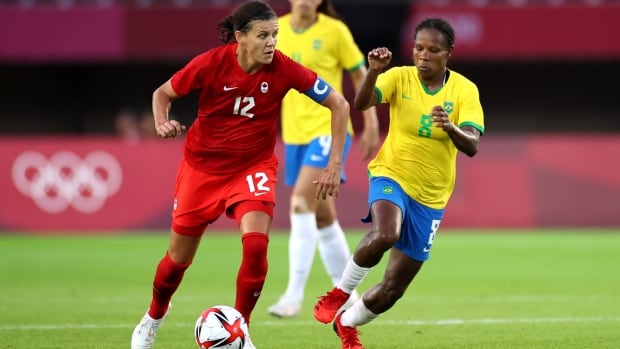 
Canada will head to South America next month for a pair of women’s friendlies against Brazil during the November FIFA international window.

The seventh-ranked Canadians will take on No. 9 Brazil on Nov. 11 and Nov. 15. Location of the games in Brazil was not announced.

“We are excited to end the year with two great games against Brazil,” Canada coach Bev Priestman said in a statement. “We know both of our nations have a rich history when playing each other in big moments. Given some of the roster realities, this window will again provide us with a great opportunity to continue to test and build our depth against very good opponents.”

“With our group now known for the FIFA Women’s World Cup Australia and New Zealand 2023, it makes coming together and climbing again that much more exciting. It’s been a big year for many of our players and we are excited to hopefully end it with more excellent performances and steps forward.”

The most recent meeting was at the Tokyo Olympics where the Canadians prevailed 4-3 in a penalty shootout after the quarter-final game finished knotted at 0-0. Canada also downed Brazil 2-1 in the bronze-medal game at the 2016 Rio Olympics.

The Canadian women are 10-2-3 this year and have won four straight since losing 1-0 to the U.S. in the final of the CONCACAF W Championship in Mexico in July.

Canada defeated Australia 1-0 and 2-1 last month in Brisbane and Sydney, respectively. Earlier this month, it beat Argentina 2-0 and Morocco 4-0, with both games in Spain.

Canada will play in Group B alongside World Cup co-host Australia (No. 13), Ireland (No. 24) and Nigeria (No. 45) at next summer’s tournament.

Ancient microbes may have survived below Mars’ surface

Bizarre rescue of camel from floodwaters