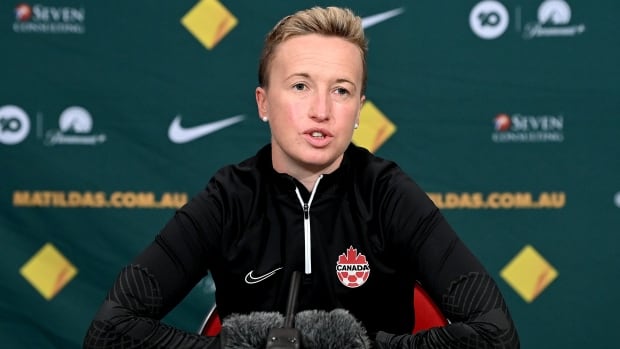 And she says what comes next is key.

“There’s no place for it in our sport, never mind in society,” Priestman said Wednesday from Spain where the Canadian women play Argentina in an international friendly Thursday. “The most important thing is that we create an environment where our players feel safe. And it’s a shame that that hasn’t happened. The important thing is what’s put in place to make sure it never happens again.

“My thoughts, the team’s thoughts are all with those affected by it.”

An independent investigation into the scandals in the NWSL last season found emotional abuse and sexual misconduct were systemic in the sport, impacting multiple teams, coaches and players.

Riley, who denied the allegations, was quickly fired as head coach of the North Carolina Courage, and NWSL commissioner Lisa Baird stepped down.

Five of the 10 head coaches in the NWSL last season either were fired or stepped down amid allegations of misconduct.

“The verbal and emotional abuse players describe in the NWSL is not merely ‘tough’ coaching. And the players affected are not shrinking violets. They are among the best athletes in the world,” Yates wrote.

On Wednesday, the Portland Timbers and Thorns FC announced that president of soccer Gavin Wilkinson and president of business Mike Golub had been “relieved of their duties with both clubs, effective today.”

Canadian international Jenna Hellstrom, a former Washington Spirit player who is now with Sweden’s KIF Orebro, took to Twitter after the report came out.

“It still shocks me that this behaviour was found at the professional level! Dreams were shattered by this behaviour,” wrote Hellstrom, who is not in the current Canadian camp.

More than 200 people were interviewed by investigators in the Yates report. Some two dozen entities and individuals provided documents. U.S. Soccer also provided documents and the firm reviewed 89,000 deemed likely to be relevant.

The injuries are mounting for Priestman ahead of Canada’s international friendlies in Spain against Argentina and Morocco.

Talismanic captain Christine Sinclair and influential fullback/midfielder Ashley Lawrence are the latest players sidelined. They join the missing Vanessa Gilles, Deanne Rose, Gabrielle Carle and Jayde Riviere, who will all watch Thursday’s game with Argentina from a distance.

Midfielder Sarah Stratigakis has been summoned as an injury replacement. Priestman said the injuries to Sinclair and Lawrence, while not long-term, would have prevented them from seeing action in the current international window.

“For me, looking at the bigger picture, it definitely didn’t make sense — particularly with Sinc, [to] put her on a plane all the way to Spain to not be able to feature,” Priestman said of her 39-year-old skipper. “It’s a shame.”

Priestman looked for the positives, saying the absences will give others a chance to step up. But she knows what she is missing.

“They’re all big names that are missing. It doesn’t just have an effect on the field. It also has an effect off the field,” she said. “But I’ve been incredibly happy with the players that have come in and stepped up. The environment seems to still be the environment that we know. But yeah it has an impact.”

The seventh-ranked Canadian women play No. 31 Argentina on Thursday at Estadio Sanluqueno in Sanlucar de Barrameda and No. 76 Morocco on Monday at Estadio Municipal de Chapin in Jerez. The games come in the last international window before the Oct. 22 draw in Auckland for next year’s FIFA Women’s World Cup.

Like Canada, Argentina and Morocco have qualified for the 2023 soccer showcase, which runs July 20 to Aug. 20 in Australia and New Zealand.

The Olympic champion Canadians are 8-2-3 this year with the losses coming to the top-ranked U.S. (1-0 in July in the CONCACAF W Championship final) and Spain (1-0 in February at the Arnold Clark Cup).

Star defender Kadeisha Buchanan returns after missing the September games Down Under.

Celtic forward Clarissa Larisey and University of Southern California midfielder Simi Awujo are back in camp after getting their first senior call-up in September.