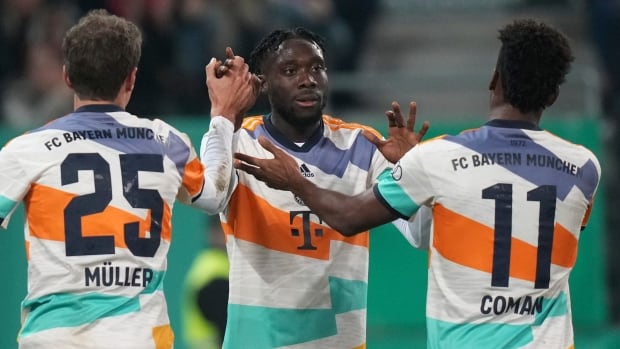 
Canadian star Alphonso Davies scored a goal and set up another as Bayern Munich defeated Augsburg 5-2 Wednesday to reach the German Cup round of 16.

Both goals were stylish affairs.

In the 74th minute, the 21-year-old from Edmonton passed the ball to himself in taking a corner and then nutmegged Augburg’s Julian Baumgartlinger before feeding Jamal Musiala whose shot beat Augsburg ‘keeper Tomas Koubek.

Davies scored Bayern’s fifth goal in the 91st minute, slotting home a pass from Thomas Mueller after making a lung-busting run from his left fullback position.

It was Davies’ sixth goal in Bayern colours and his first in non-Bundesliga competition.

Mads Pedersen put Augsburg ahead in the ninth minute but Eric Maxim Choupo-Moting scored twice and set up another goal for Joshua Kimmich as Bayern replied.

An own goal from Dayot Upamecano restored Augsburg’s hopes of an upset in the 65th until Musiala sealed the result.

Davies, who suffered a cranial bruise after taking a boot to the head in an Oct. 8 game at Borussia Dortmund, returned to action Sunday in Bayern’s 5-0 league win over SC Freiburg.