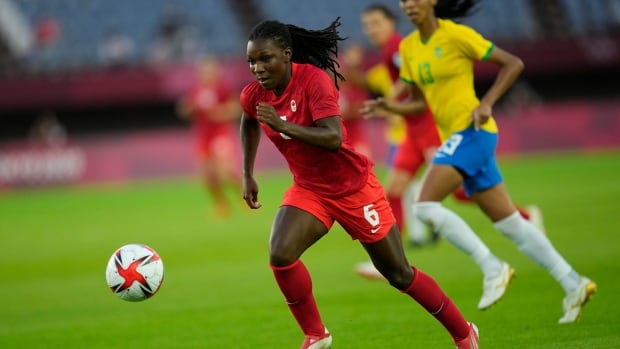 
After suffering a setback as a teenager that nearly halted her career before it even started, Deanne Rose rebounded to play a starring role for Canada at the last two Olympics.

Rose had aspirations of playing professional soccer while growing up in Alliston, Ont. But she made the decision in 2014 to quit the sport after being dropped from Canada’s under-15 side. At the time, current senior team coach Bev Priestman oversaw the under-15s.

“Before the Rio Olympics, I was cut at U-15 level. At 15, that’s a common age for a lot of girls to stop playing,” Rose said. “So, it was a real question for me of do I want to stop or do I want to continue? Am I good enough? Can I fulfill my dream? Is this possible? I had those types of questions in my head.”

“I thought it was out of the question for me, so I just planned on going to college and put the idea of playing pro soccer behind me because I didn’t think I’d get the opportunity. I’d moved on.”

But in 2015 she was invited to train with Canada’s U-17 side. Things went so well that by the end of the year she earned her first cap for Canada’s senior team as a 16-year-old. In 2016, she was named Canada’s U-17 player of the year, capping off an amazing comeback.

“At first, I definitely was upset about being cut at 15. As I got older and had a few years to process it, I realized there were things I needed to improve on that only Bev saw at the time. It all worked out in the end,” Rose said.

It more than just worked out for Rose, who has scored 10 goals and tallied nine assists in 70 appearances for Canada. One of her goals came in a 2-1 win over Brazil in the bronze medal match at the 2016 Rio Games. She also scored a crucial penalty to keep her country’s hopes alive in the shootout against Sweden, as Canada went on to win the gold medal in Tokyo.

Rose was a first-round pick (10th overall) in the 2021 NWSL draft after four seasons at the University of Florida. Rather than play in the NWSL, she signed with Reading FC of England’s FA Women’s Super League. Reading found the going tough in 2021-22, finishing eighth out of 12 teams in the final standings.

But Rose, a 23-year-old forward, had personal success by scoring three goals in 18 appearances as a starter, firmly establishing herself as one of the league’s brightest newcomers while testing herself against some of the world’s best players.

“I can honestly sit back and say that I had high expectations for myself this season,” Rose said. “There’s a lot of positives to take from it, but there’s a lot of growth areas, as well. This was a good season for me in that it showed what I can do but also what I need to improve on at the same time.”

The coach who cut her as a 15-year-old has also noticed the benefits of her time in England.

“What I’ve seen from her over the years is a real progression in her game — there’s a real maturity to her play,” Priestman said. “She’s worked hard to get to that next level, and her experience at Reading has helped her elevate her game even more.

“She’s benefited from playing alongside and against top players on a weekly basis.”

Making the jump from college to the pros was hard enough on Rose. The FA WSL season is longer, and the standard of play is higher from a tactical and technical perspective. Being away from home made the transition even more difficult.

“There was definitely some culture shock moving to England. I’m still adjusting to be honest. I’ve had a few family and friends come visit which has helped, but even then, with the culture change, the food and the weather, everything has been so different for me. It’s been an interesting move and I’ve learned a lot about myself,” Rose said.

“Coming here gave me the opportunity to get out of my comfort zone as a player, to move away from the physicality of the game in the U.S. and embrace the tactical challenge that England offered.”

Her finest moment came when she scored a spectacular goal in a 1-0 home win over Chelsea before the Christmas break. In the fourth minute, Rose collected a pass deep inside her half and went on a fantastic solo run, dribbling for 40 yards as she breezed past several Chelsea players.

After playing a quick one-two with teammate Emma Harries, Rose fired her shot past Ann Katrin-Berger, regarded as one of the best goalkeepers in the world. It was one of only two games Chelsea lost all season as they claimed their third consecutive league championship.

“I’ve gone back and watched it a bunch of times. It was one of the highlights of the season for me individually, and that entire game as a team — the way we were able to execute things perfectly. That’s a proud moment for me. We hadn’t beat Chelsea before in the WSL, so it was a historic moment, and it was special to be a part of that,” Rose said.

Alliston, Ont.’s Deanne Rose scored in the 3rd minute en route to a 1-0 finish for Reading FC against Chelsea in the FA Women’s Super League.

With the season now over, Rose is preparing to rejoin the Canadian women’s team in July in Mexico for the CONCACAF women’s championship, which serves as a qualifying tournament for both the 2023 FIFA World Cup that will be co-hosted by Australia and New Zealand, and the 2024 Paris Olympics.

Having come off a solid debut campaign for Reading, more will be expected of her from Priestman and the coaching staff.

“They’ve seen I’ve grown as a professional since I moved to Reading, and they hold me to a higher standard now that I’m playing in England. They demand more consistency and to be more ruthless in front of goal,” Rose said.

Most trans kids maintain a consistent identity, study says. Experts explain how to support them