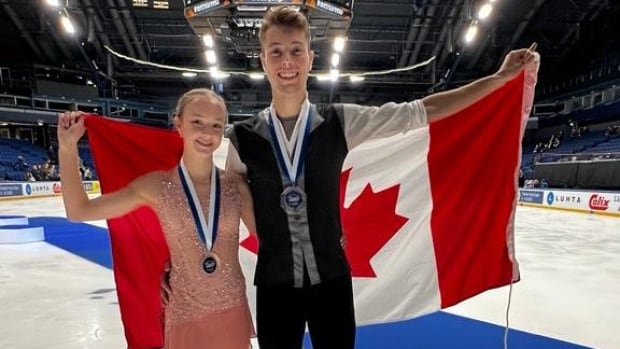 
Despite making their partnership official just days before the pandemic hit, Brooke McIntosh and Benjamin Mimar are still one of Canada’s newest and youngest Canadian pairs teams ready to make their senior Grand Prix debut Oct. 29 at Skate Canada in Mississauga, Ont.

“It’s definitely been a wild ride,” McIntosh said recently. “I don’t think we would’ve thought that we’d have two Grand Prix going into our first senior season when we first got together.”

Having said that, there seems to be few nerves about the debut.

“A lot of people don’t know us yet,” Mimar said. “So it’s exciting to show everyone who we are.”

While both are professional and dedicated to skating  — Mimar relocated from Laval, Que., to Etobicoke to partner with McIntosh, who’s from Toronto  — they have opposite personalities.

Seventeen-year-old McIntosh, who is the sister of Canadian swimming sensation Summer McIntosh, is soft spoken, bringing a seriousness to the team. Mimar, 23, is more playful and tries to bring the funny.

Asked whether Mimar was funny, she replied with a smile. “Sometimes.”

Whatever their evolving dynamic is, it seems to be working. The duo won bronze at the world juniors this past spring and started this season with a bronze at Finlandia Trophy.

It’s no doubt the two had an unconventional start. After meeting, they skated together for four weeks before making the partnership official, only for the pandemic to hit. That put an end to training together and added a new challenge in creating chemistry.

“We couldn’t communicate and get a good relationship because we didn’t know each other and COVID just started so it was kind of hard,” Mimar said.

On top of that, Mimar had just moved to Ontario and was working to improve his English. But the two made it work. They would text, do training sessions over Zoom and get to know each other using Instagram and SnapChat.

McIntosh and Mimar’s situation isn’t unique. Michael Slipchuk, Skate Canada’s high performance director, has seen many partnerships develop over the pandemic. And despite the obvious challenges, there are some benefits.

“With pairs skating, you often need a good year, maybe two, just to really gel as a team,” he said. “In some ways, COVID gave people the opportunity to do that when there was no competition. And when the time comes to compete, you’re a much more evolved pair team.”

And that’s what Sipchuk saw happen with McIntosh and Mimar.

“All the growing pains that come along with a new team happened in training when no one was competing,” he said. “And when they got the chance to get out and compete internationally, we saw what the result was: they ended up with a medal at junior worlds.”

The duo is not putting much pressure on themselves this year. It’s their first senior season and they’re debuting new programs: their short is to Release by Jennifer Thomas and their free is to the Les Miserables soundtrack.

But there are a couple signs to watch for to track the pairs duo’s progress. First is how they’re building skating skills and artistry.

The two are aware of that and find inspiration from teammates and world medallist ice dancers Piper Gilles and Paul Poirer.

“We get to see Piper and Paul train every week, they’re really amazing,” Mimar said. “What we need to do is improve our skating and that’s what they do well.”

Their scoring range will also tell how well they’re adjusting to the senior scene, because it’s a lot different than junior.

“You step out on the ice and you can be out there with world champions who score 220 points,” said Slipchuk. “I always look at our pair teams when they start out, we want to get them to start targeting in the 160s to 170s, even close to 180.”

It seems the duo is right on track with a total score of 166.61 at their first senior competition in Finland.

Mimar has only ever skated in front of 300 people, so the pair is excited to perform in front of a big crowd and on home ice for the first time as partners. At least one of McIntosh’s parents will be there to watch as her sister Summer is competing the same weekend, in the same city.

“It sucks because I wish I could go watch and I’m sure she would say the same,” said McIntosh, who says the two are very close. They text constantly about training and school while on the road.

And despite her sister’s recent success, McIntosh doesn’t internalize any contrast between their athletic careers.

“I’ve never had someone compare me to Summer,” she said. “We’re both so proud of each other and everything we’ve accomplished in the past year.”

Another source of comparison the duo doesn’t think about is the storied line of pair skaters that came before them, especially considering the team is debuting after a landslide of retirements from greats like Meagan Duhamel and Eric Radford, Dylan Moscovitch and Lubov Ilyushechkina, and Kirsten Moore-Towers and Michael Marinaro.

They simply see the retirements as room for opportunity.

“We see ourselves as one of the best teams in Canada,” said Mimar. “And now, we just need to prove it.”