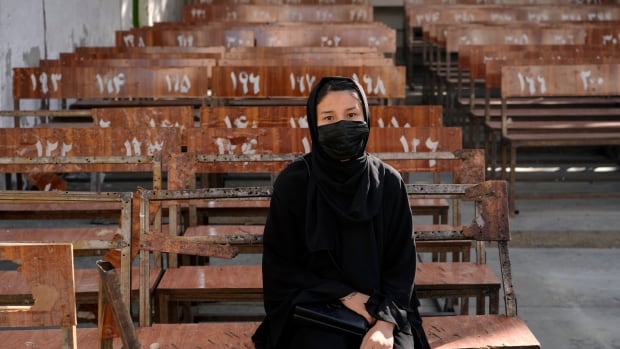 Canadian officials have met with Taliban more than a dozen times since Kabul fell: documents


Canadian government officials have met with representatives of the Taliban on at least 13 occasions in Qatar since it swept to power in Afghanistan in August 2021, documents obtained by CBC News reveal.

The documents, obtained through access to information law, show David Sproule, Canada’s senior official for Afghanistan, has been — along with various Global Affairs Canada (GAC) officials and representatives of allied countries — pressing the Taliban for commitments on extending the right to an education to women, fighting terrorism and granting safe passage to Afghans who want to leave the country.

Unlike foreign affairs departments in the U.S. and Pakistan, Canada does not provide regular updates on its talks with the government in Afghanistan.

Foreign Affairs Minister Mélanie Joly declined an interview request for this story, but Prime Minister Justin Trudeau told journalists Wednesday morning that Canada has no intention of recognizing the Taliban as Afghanistan’s government.

“The reality is, along with international partners, we have to continue to press on them to respect womens’ rights, to make sure the girls can go to school, to help the safe passage of people who want to leave Afghanistan. There is a need to engage even though we will not be recognizing them,” he said.

In a statement, GAC spokesperson Charlotte MacLeod emphasized how Sproule has been engaging the Taliban informally, with allied countries, and all would continue to press them on human-rights related issues, fighting terror and other “key priorities.”

The documents obtained by CBC News are mostly emails Sproule sent to his GAC colleagues. They show the Taliban has made its own requests of Canada and other countries — and has issued denials regarding the dangers faced by Afghans trying to leave, despite multiple reports by CBC News and other media outlets about those dangers.

In a meeting on Oct. 12, 2021 — not long after it took over — the Taliban asked representatives of foreign governments to reopen their embassies in Kabul.

According to a note Sproule wrote to his colleagues, Afghanistan’s acting foreign minister at the time, Amir Khan Muttaqi, also asked those governments to lift their sanctions and claimed his government was inclusive because it included ethnic minority representation and “women in government have not been fired.”

During that same meeting, Sproule reported, the Taliban claimed that “people are using security as an excuse to leave the country, but are really leaving to seek economic opportunities.” Sproule said the Taliban also claimed that while it did not want anyone to leave, it would “not create hurdles if they wanted to go.”

Sproule said that the Taliban suggested that foreign governments “interested in helping women … should start by paying the salaries of 200,000 female teachers, including 28,000 in Kabul.”

Sproule reported that during his next meeting with Afghan government representatives, also in October, the Taliban acknowledged “a minor problem in cabinet” — a lack of women.

Taliban representatives also claimed, he said, that “women judges, prosecutors and others” taking part in demonstrations against the regime “are deliberately provoking security personnel to retaliate against them so they can produce video of the retaliation to back up their claims for asylum abroad.”

Sproule reported the Taliban accused “the international community” of a double standard because it “recognized many other governments that came to power by force but had the support of the people.”

He said that on Nov. 23, he asked another Taliban official (whose name and title were redacted in the documents) why they would not consider a power-sharing agreement “with respected figures outside the movement to give it added legitimacy.”

The Taliban representative agreed there would be an “advantage in doing so,” Sproule said, since the last four decades in Afghanistan showed that one political group could not fully control the country by force — but the regime was maintaining “100 per cent monopoly over power.”

The correspondence also showed Sproule was troubled by Taliban members entering Canadian diplomatic property on Sept. 10, 2021, a little less than a month after the regime seized power and after Canada announced it was temporarily shutting its embassy and vacating staff.

A report by the British news organization Sky News from that day shows journalists entering the British and Canadian embassies accompanied by Taliban security guards. Footage from the Canadian compound shows discarded bottles of wine on the ground and a Taliban member saying, “They must have had a lot of money to eat this much … They used to eat good food, get drunk and then have sex with each  other.”

The first reference to this event in Sproule’s documents comes in a note he wrote on Sept. 20, 2021. In it, he says he plans to formally register “concern about Taliban individuals entering our diplomatic property in Kabul in violation of Afghanistan’s treaty obligation to protect diplomatic property.”

The documents say Sproule brought up the event again during meetings in October and November of 2021 with different Taliban representatives. He reports he was told to “forward the video clip of the incident for the matter to be pursued.”

The last meeting between Sproule and Taliban representatives summarized in the documents took place on Feb. 16 of this year. One document says Sproule warned the Taliban that “future engagement of the international community” with their government would be “directly influenced by its actions against terrorist groups” and that Afghanistan should “not again be allowed to serve as a base for terrorist activities.”

In response, says the document, Taliban defence official Abdullah Hanefi insisted that the Taliban controlled “all of Afghanistan’s territory” and while small cells might exist, no terror group was using Afghanistan as a training ground or to finance activities.

Nipa Banerjee, a professional in residence at the University of Ottawa School of International Development and Global Studies, said that while it may not be easy to conduct diplomacy with the Taliban, “it is absolutely essential.”

“Abandoning the Taliban at this stage, to me, is equivalent to abandoning the ordinary Afghans who have nobody to support them,” she said.

Banerjee worked at the Canadian embassy in Kabul for four years that overlapped with Sproule’s tenure as ambassador to Afghanistan from 2005 to 2007.

Banerjee said Canada could team up with allies in the international community to open a representative office in Afghanistan in order to have a presence on the ground — without committing to a full embassy.

She said such an office could fact-check Taliban claims that it is allowing girls to return to school and is not jailing political dissidents.

“Whether or not [the Taliban] are trustworthy is something that needs to be established and the government has to figure out how to establish that,” she said.

“I’m saying that fact-checking with goals, outcomes and indicators of outcomes, this can be done and we should work on that.”

GAC’s departmental statement to CBC News suggested it has little basis to believe the Taliban’s claims. It noted “the human rights situation in Afghanistan continues to deteriorate severely, especially with regard to secondary education for girls,” and it is “deeply concerned about reports of extrajudicial punishments … such as reprisals and summary executions, disappearances and detentions.”

Canada has allocated more than $143 million in humanitarian assistance to Afghanistan and the region this year.

Former foreign affairs minister Marc Garneau appointed Sproule as senior official for Afghanistan during the last Canadian federal election. He made the announcement on Twitter on Aug. 27, 2021.