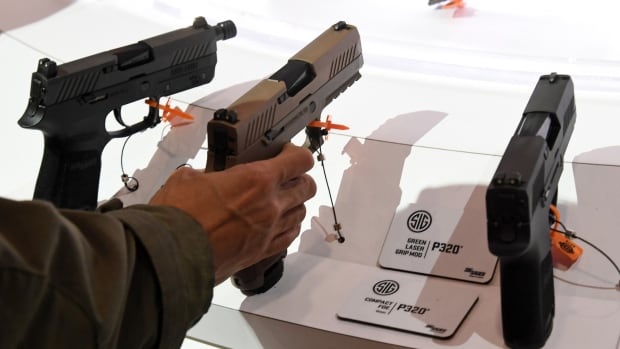 
Canadian soldiers — and eventually sailors, aircrew and military police — will be getting new pistols to replace their Second World War-era handguns, the Department of National Defence (DND) said Friday.

And federal procurement officials have chosen the SIG Sauer P320. The firearm has been the subject of multiple lawsuits in the United States and an internal investigation by the Canadian Special Forces — an investigation that was launched after a soldier was wounded in a misfire incident in November 2020.

The $3.2 million US contract for new pistols and holsters was awarded to M.D. Charlton Co. Ltd. of Victoria, B.C., the licensed distributor of the weapon in Canada.

The initial contract involves the purchase of 7,000 pistols with an option to purchase up to 9,500 more. The pistols are being given a Canadian designation of C22.

If the full contact is exercised, the cost of the deal — with training and spares — could exceed $7.6 million.

The new handgun replaces the Browning Hi-Power semi-automatic pistol. Delivery of the new weapons is expected to begin next year.

The DND statement announcing the purchase cited the fact that the “Sig Sauer P320 is in use with multiple militaries around the world, including Denmark, France and the United States.”

The soldier, belonging to Joint Task Force 2 (JTF-2), was hit in the leg and suffered a flesh wound in the accident, which took place on Nov. 5, 2020 on a firing range at Dwyer Hill outside Ottawa, the unit’s principal base.

CBC News reported on the accident in an exclusive story in February 2021.

The special forces had just started using the pistol when the incident happened. The weapon was withdrawn temporarily from service, but was reinstated earlier this year after an investigation cleared the pistol for use.

At the time of the initial CBC News report, the weapon’s American manufacturer claimed the special forces soldier wounded in the accidental discharge was using the wrong holster.

Initial complaints from some users of the SIG P320, which has been manufactured since 2014, involved claims that the weapon went off without the trigger being pulled.

SIG Sauer, a German weapons maker with a U.S. headquarters in Newington, N.H., upgraded the weapon in 2017. That did not stop a series of lawsuits — most of them launched by injured U.S. law enforcement members. Some of those lawsuits are ongoing.

The company settled a class action lawsuit in 2020 related to weapons that had not been upgraded. In court papers filed in relation to the settlement, SIG Sauer maintained that the P320 is safe and pointed to its free voluntary modifications, which swap out certain components of the gun.

Last month, a U.S. federal district court judge in New Hampshire rejected another proposed class action lawsuit filed by an Arizona gun owner who argued that his pistol lost value due to the alleged design flaw involving the weapon’s trigger.