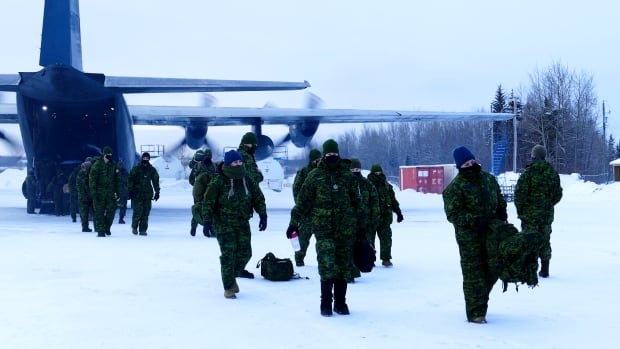 
The military has left Shamattawa First Nation nearly three weeks after they were called in to help the northern Manitoba community get control of its COVID-19 cases.

The military arrived in full force Dec. 13 to help Shamattawa set up and run its isolation centre, and do testing, contact tracing and wellness checks.

All of the approximately 55 Canadian Forces members left Shamattawa Dec. 31, and are now in isolation, military spokesperson Daniel Le Bouthillier wrote in an email to CBC News on Saturday.

The decision to leave was based on a “drawdown plan” developed by the community’s chief, band council and community clinic, Le Bouthillier says.

“A radio message by Shamattawa Band Council broadcasted to the community recognized the contributions of all involved in helping the people of Shamattawa First Nation,” a Facebook post from the military reads.

CBC News has reached out to Shamattawa Chief Eric Redhead for comment but has not yet received a response.

Only 33 active cases remaining in Shamattawa

The military arrived after Redhead pleaded for help to get the rampant COVID-19 cases under control.

Shamattawa is one of the First Nations hardest hit by COVID-19. Located 745 kilometres northeast of Winnipeg, its test positivity at one point hovered between a whopping 70 and 80 per cent.

When soldiers arrived in mid-December, about one-third of the population of 1,300 had tested positive for the virus.

Now, of the 400 confirmed COVID-19 cases in Shamattawa, only 33 remain active, the military spokesperson said.

The military’s work also enabled the band office and Northern Store to re-open in the community. Essential workers in Shamattawa were also cleared to return to their duties.

“By Dec. 31, all tasks formerly done by [Canadian Forces] are being done by the Shamattawa First Nation Band employees and volunteers,” Le Bouthillier wrote.

The military has already been deployed to at least six remote Indigenous communities in the Prairies and Ontario to help them deal with a surge of COVID-19 cases.

Along with Shamattawa, a 12-person multi-purpose medical team was sent to a care home on Opaskwayak Cree Nation in The Pas from Nov. 21 until Nov. 29.

In a tweet Saturday evening, Canadian Armed Forces Operations said the 34 members it sent to the community have started to leave.

Since 16 Dec, 34 CAF personnel have been working in Red Sucker Lake First Nation, MB, with partners and the community to provide assistance during a COVID 19 resurgence. After a significant reduction of active cases, personnel started their redeployment, set to be complete Jan 6 <a href=”https://t.co/jz7KbY4xw4″>pic.twitter.com/jz7KbY4xw4</a>

The CAF said it expects members to be out of the community by Jan. 6.