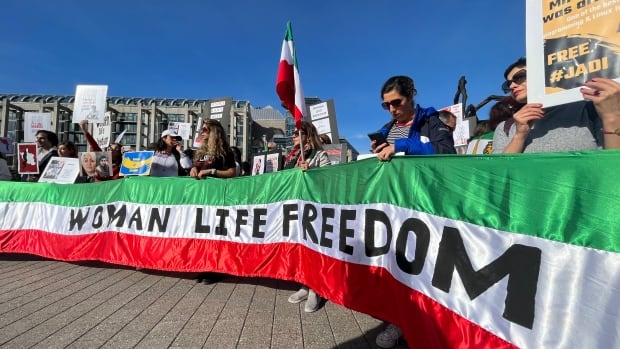 
Scores of demonstrators lined the streets of Canadian cities from Halifax to Vancouver as part of a worldwide “human chain” to show solidarity with ongoing anti-government protests in Iran.

In Toronto, stretches of Yonge Street were flanked by crowds chanting “women, life, freedom” and “say her name: Mahsa Amini,” who died on Sept. 16 after being detained for allegedly violating the country’s strict Islamic dress code for women.

At a midtown intersection, cars blared their horns as they passed by demonstrators holding pictures of loved ones who were among the victims of Ukraine International Airlines Flight 752. On Jan. 8, 2020, 176 people, including 55 Canadian citizens, were killed when Iran’s Revolutionary Guard shot down the Ukrainian airliner.

The Canadian events were organized by the Association of Families of Flight PS752 Victims.

Arash Morattab, who lost his brother and sister-in-law in the crash, said the victims of Flight 752 have common cause with the protest movement that has rocked Iran for nearly a month and a half in the face of harsh backlash from security forces.

“We are all victims of a regime that started killing people from the first days of them coming into power, and this keeps going until now,” said Morattab. “They killed our beloved ones in January 2020, and now they kill other people that fight for their rights.”

‘It’s not just about the hijab’

The fight for justice is particularly resonant for women in Iran who continue to be denied freedom, said protester Sara Ahmadi. She said she ran into problems with the regime because she wasn’t legally married to her common-law partner, who was killed in the plane crash.

“Women don’t have any rights in my country,” Ahmadi said. “It’s not just about the hijab. It’s about everything.”

“It’s unbelievable,” said Mehrdokht Hadi, one of the organizers of the Toronto event. “Two months ago I couldn’t imagine this crowd on the streets, now people are not scared and people are motivated.”

The protests in Iran sparked by Amini’s death first focused on the state-mandated hijab, or head scarf for women, but quickly grew into calls for the downfall of the country’s theocracy.

At least 270 people have been killed and 14,000 have been arrested in the protests that have swept over 125 Iranian cities, according to the group Human Rights Activists in Iran.

The Iranian government has repeatedly alleged that foreign powers have orchestrated the protests, but have not provided evidence to support the claim.

Amid the Iranian regime’s retaliation against human-rights activists, Prime Minister Justin Trudeau announced earlier this month that more than 10,000 members of Iran’s Revolutionary Guard will be permanently barred from Canada as part of tough new immigration measures.

“We are here to ask our government and Canada to stand on the right side of history,” said Alavi, a board member of the Association of Families of Flight PS752 Victims. “Stop negotiating with the regime in Iran while people are fighting in the streets.”

Similar protests unfolded on Saturday in cities including St. John’s, Montreal, Saskatoon, Edmonton, Calgary and Vancouver. Around the world, cities in countries such as Australia, France, Germany, Italy, the U.K. and the U.S. were also slated to host rallies.

In Ottawa, Trudeau addressed protesters gathered just outside the National Art Gallery. People in the crowd held signs and flags, chanting “Canada, U.S., take action, take action” and “Iranians made their choice, Canada be their voice.”

WATCH | ‘We are not stopping’: Trudeau tells protesters:

As demonstrators gathered across Canada to show solidarity with those in Iran protesting the repression of women’s rights following the death of Mahsa Amini, Prime Minister Justin Trudeau told a crowd in Ottawa that ‘we are not stopping.’

Trudeau said the Iranian regime is “desperate” for people to move on from the demonstrations, but that he and other Canadians will continue to stand with the protesters in Iran.

“They are not forgotten, their voices are being heard,” he said.

In Halifax, the show of support for the people of Iran moved some demonstrators to tears, said Reza Rahimi, who lost his mother-in-law when Flight 752 was shot down.

“[Locals and] immigrants from every nation and every race were standing beside us,” Rahimi said.

“Three years after losing my mother-in-law abroad, I’m not saying it’s let us move on — we would never move on — but it will help us put something on the pain.”