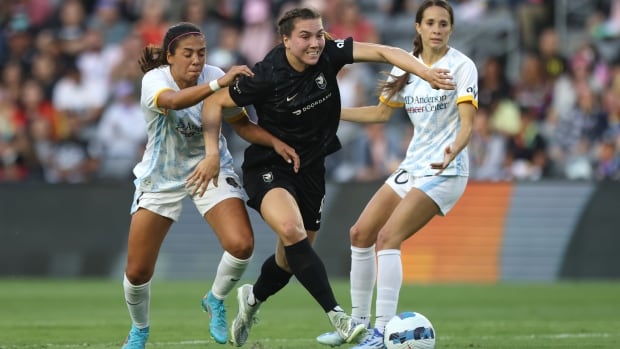 Originally a tennis player growing up in Ottawa, Gilles switched to soccer as a teenager and eventually earned a scholarship to the University of Cincinnati, leaving her mark on the program by winning several individual honours. Gilles turned pro after school, first signing with Cypriot side Apollon in 2018 before moving to French club Girondins de Bordeaux later that year.

She made her national team debut for Canada in 2019, and only had six caps to her credit going into last the 2021 Tokyo Olympics. She was a bench player at the start of the tournament, but by the time Canada won the gold medal, she had displaced veteran Shelina Zadorsky in the starting line-up. She still holds down a starting role for Canada to this day, having established herself as one of the best centre backs in the world.

Gilles won universal plaudits for her performances in Tokyo, earning the nickname “The Magnet” from her teammates. With her stellar showing at the Olympics, Gilles announced her presence to the rest of the world and made a lasting impression on many notable observers, including Canada Soccer Hall of Famer Amy Walsh, who earned 102 caps for the Canadian women’s team from 1997 to 2009.

“The way she played, and the composure, wherewithal and veteran mentality she injected into the back line during Canada’s run to the gold medal in Tokyo was so impressive,” Walsh told CBC Sports.

Now, Gilles is ready to take on even more. Last week, the 26-year-old joined Olympique Lyon on loan from the NWSL’s Angel City FC until the end of the French club’s 2022-23 season. The Canadian international transferred to Angel City from Bordeaux in late 2021, but a lingering hip injury sidelined her for most of this season.

Vanessa Gilles from Châteauguay, Que., scores in the third minute of the game and leads Angel City FC to a 2-1 victory over North Carolina Courage.

This move represents a major career move for Gilles. Lyon is one of the most successful clubs of all-time in women’s soccer, having won a record eight UEFA Women’s Champions League titles, and 15 French first division crowns in the last 16 years.

Gilles has hit the big time by returning to France, and seems poised to leave the NWSL in her rearview mirror.

“I was texting with a former teammate of mine and she said, ‘Does it make me an a–hole to think that the NWSL wasn’t big enough for Vanessa Gilles?’ And I agreed. I don’t think it’s a knock on the NWSL, but with Gilles, we don’t know what her ceiling is yet. There’s still so much development in her game that we have yet to see, and she is going to keep improving,” Walsh explained.

“She’s going to get these daily tests in an environment and a team with a rich history like Lyon … Competing against top players both in France and the Champions League will elevate her game.”

Gilles is still dealing with a hip injury that has sidelined her for several months, which means she won’t be called up for Canada’s upcoming pair of friendlies vs. Argentina and Morocco, and she isn’t expected to make her debut for Lyon until next month.

When Gilles finally does walk onto the pitch for Les Lyonnaises, she’ll be filling some very big shoes. In six seasons at Lyon, Canadian teammate and fellow centre back Kadeisha Buchanan won five Champions League trophies, as well as five domestic championships and three French Cups.

Buchanan left the French outfit in the off-season, moving to England to sign with Chelsea. That left a gaping hole in Lyon’s back line, which grew even bigger after defender Griedge Mbock dislocated her right knee this month, effectively ruling her out for six months. Gilles will slot into the heart of Lyon defence where she’ll line up next to Wendie Renard, one of the true icons of the women’s game.

Walsh argues that this is the perfect time for Gilles to move to Lyon, as it’ll allow her game to grow even more ahead of next summer’s FIFA World Cup.

“There’s going to be a weight of expectations put on Gilles at Lyon that she didn’t have during her time at Bordeaux. The different tactical looks she’ll face in the Champions League will help her put more tools in her toolbox, and that’ll mean so much for Canada at the World Cup,” Walsh explained.

Gilles is more known for her ball-winning ability than her technical skill. Playing alongside Renard helped Buchanan develop the technical side of her game during her tenure at Lyon, and the hope is that the French veteran can have the same sort of influence on Gilles.

Walsh argues there are already good building blocks in place with the Canadian international.

“Vanessa is a good defender 1v1. She maybe doesn’t have the kind of speed you want for a centre back, but it’s her positional awareness that is continually impressive to me. She doesn’t play like a slow player that needs to take five extra yards because she knows she’s going to get beaten in a foot race. She scans the field like you’d expect how a central midfielder would, so she’s always ready for what opponents throw at her and has a solution at the ready,” Walsh said.

UK tax cuts will benefit the rich more than anyone else