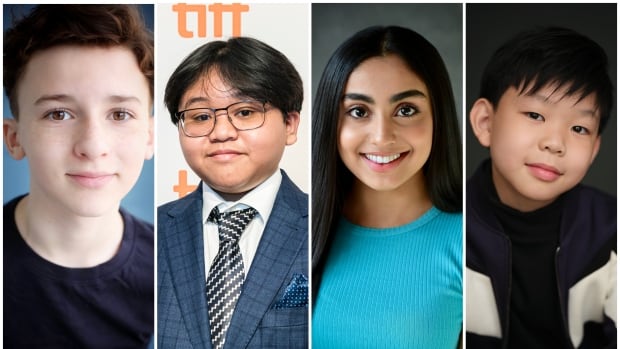 
When 13-year-old Liam Diaz auditioned for Scarborough, he had no idea that the Canadian indie film about three kids from a low-income Toronto community would become one of the country’s most critically acclaimed films of the year.

Diaz was attending a performing arts school in his hometown Mississauga, Ont., when an acting teacher suggested he throw his hat into the ring for the role of Bing, a young, gay Filipino boy from a troubled family.

“It’s definitely been a journey,” he said.

“I thought it was just going to be a small little product, but I’m happy that it bloomed into a big one.”

Diaz is now one of the youngest nominees ever to be considered for best performance by an actor in a leading role at the Canadian Screen Awards. Like other actors his age, he’s living through the whirlwind of a burgeoning career while also trying to keep up his grades and hang out with friends.

CBC News spoke with a new generation of Canada’s rising stars about the challenges of navigating the industry.

Jayden Zhang of Vancouver has always shown an interest in acting. His mom sent him to a drama summer camp, where he grabbed the attention of a talent agent.

The auditions began rolling in — but the first one stood out for having a mysterious script, with only a few pages and little information attached to it. Eventually, it led Zhang to the role that would become his big break in Shang-Chi and the Legend of the Ten Rings.

Indeed, Shang-Chi and the Legend of the Ten Rings was one of 2021’s biggest blockbusters and Zhang got a prime gig as young Shang-Chi, the counterpart to fellow Canadian movie star Simu Liu’s lead role.

“It was like a crazy roller-coaster that you were kind of scared to get on at first, but then it was really fun and you didn’t want to come off again. It was great,” he said of acting in the film.

Stephanie Gorin, a casting director in Toronto who has worked on projects like Anne with an E, Baroness Von Sketch Show and FX’s Fargo, said the challenge for young actors is to pursue acting for the right reasons.

“I think the hard thing with youth is, do it because you really love it, not because you think you’re going to be a star,” Gorin said.

“Don’t worry if suddenly you’ve got a basketball final and you can’t do an audition. Go do your basketball final, still live your life. I think it’s important to have a balance both for kids and for adults.”

Zhang said working on Shang Chi — the first role that he received through an agent’s booking — taught him how to stay grounded despite the film’s success.

Because the movie was shot in Australia in the middle of Zhang’s school year, his friends would send him homework to complete in his hotel after a day of filming. It was a “weird juggling act,” Zhang said, but he managed to get through it with the help of a tutor.

In Diaz’s case, the sudden onslaught of red carpets, awards ceremonies and media interviews took time away from his social life and he hopes that, in the future, this will be more of a consideration in productions where child actors are present.

“I feel like they could definitely improve on letting us loose a bit, and letting us take a breather,” he said.

Having begun his acting career at five months old when he was cast as a Gerber baby, Klyne said balancing his passion with his academic responsibilities is tough but “rewarding.”

“If you’ve been doing it your whole life or you’ve even been doing it for half your life as a child, it’s a lot of your time, so you really gotta love it and work a lot for it to pay off,” he said.

Breaking down some barriers

Saara Chaudry, 17, who recently won a Canadian Screen Award for best performance by children or youth for Lockdown, said her favourite part of acting is telling the stories of people whose stories generally go untold.

“Being a brown girl on screen is making a statement in itself,” said Chaudry, adding that this kind of representation was uncommon when she was younger.

“And for the longest time, and still somewhat, it is not the norm.”

Chaudry recalls an incident as a child actor performing in a staging of Les Miserables where, she said, her casting as Young Cosette was questioned because she was not white and blonde. One of the people who believed in her most was Gorin, who cast her in the production, she said.

“I’ve been pretty fortunate that I’ve been able to kind of knock down some doors, break some barriers,” Chaudry said.

“And people have believed in me enough to let a girl like me take up space on screen.”

“I think studios and networks are striving now to have more representation of minorities and the LGBTQIA+ community,” Gorin said.

“I think that that’s really important that we do that.”

Shang Chi and the Legend of the Ten Rings marked the first time a Marvel superhero was played by an Asian actor. Zhang hopes that he can be an example.

“I just want to say that for those other young Asian kids like me out there looking for more opportunities, believe in yourself,” he said.

“You can do it. And you might just end up like me. And I’m really happy about where I am.”

Sydney to enjoy rain reprieve – but not for long