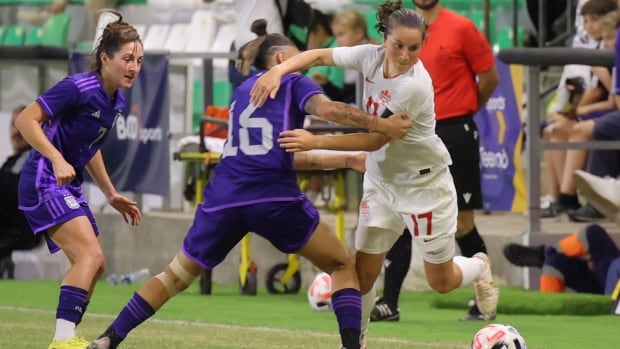 
Canada rallied in the second half, pulling ahead on an own goal and Cloe Lacasse’s first senior strike to defeat 10-woman Argentina 2-0 in a women’s international soccer friendly Thursday in Sanlúcar de Barrameda, Spain.

Neither team showed a finishing touch in the first half on a warm evening at Estadio Sanluqueno. But Canada, bolstered by reinforcements off the bench, looked more dangerous after the break and pulled ahead in the 68th minute.

Evelyne Viens, after a nice give-and-go with fellow substitute Simi Awujo, went after a loose ball in the Argentina penalty box. She arrived at the same time as goalkeeper Vanina Correa and, in the ensuing collision, the ball bounced back off defender Vanessa Santana into the goal.

Substitute Quinn, who goes by one name, started the play with a ball that sliced open the Argentine defence.

Lacasse made it 2-0 in the 87th minute, tapping home a cross off fellow substitute Clarissa Larisey that bounced off the Argentine ‘keeper and dropped at her feet for her first goal in 12 senior appearances. A late Viens goal was negated by offside.

Canada shuts out Argentina 2-0 in Spain

Cloé Lacasse scored the go ahead goal for Canada to seal a 2-0 victory over Argentina in a friendly Thursday.

Canada, ranked seventh in the world, had 66 per cent possession in the first half but was not clinical in front of goal. And when it did threaten, Correa was up to the challenge. No. 31 Argentina, meanwhile, showed its skill on the ball when it had it but failed to put a shot on target in the first 45 minutes.

Argentina was physical on the day and Marina Delgado was sent off in the 57th minute after receiving a second yellow for lashing out with an arm and connecting with Canada forward Adriana Leon’s throat after the two tangled going after the ball. Delgado picked up her first yellow in the 53rd minute.

The Canadian women face No. 76 Morocco on Monday at Estadio Municipal de Chapin in Jerez. The games come in the last international window before the Oct. 22 draw in Auckland for next year’s FIFA Women’s World Cup in Australia and New Zealand.

Argentina was also missing players due to club commitments in the Copa Libertadores competition.

Midfielder Jessie Fleming, earning her 108th cap, wore the captain’s armband in the absence of Sinclair. The Canadian starting 11 went into the match with a combined 808 caps.

Kailen Sheridan started in goal behind a back four of Allysha Chapman, Kadeisha Buchanan, Shelina Zadorsky and Bianca St-Georges. Fleming partnered Julia Grosso in the heart of the midfield with Nichelle Prince, Janine Beckie and Leon playing behind striker Jordyn Huitema.

Beckie, who has played both at fullback and wing, took over the No. 10 role in place of Sinclair.

It was a scrappy opening with both teams looking to find their rhythm. Canada came close in the 10th minute after a fine run and cross by Prince, only to have the play whistled dead when the ball hit Leon’s arm before she swept it into goal.

The Argentines took no prisoners with Leon toppled heavily three times and Huitema bodied to the ground once in the first 30 minutes.

Delgado almost put the ball in her goal in the 30th minute trying to deal with a low cross from St- Georges, the recipient of an accurate through ball from Fleming.

Correa made a fine reflex save to deny Leon in the 35th minute after another Prince cross.

Priestman sent on Quinn and Viens to start the second half, with Beckie dropping back to fullback. And Correa had to be sharp to make a one-handed save off a Viens header in the 49th minute.

Correa stopped a Buchanan header off a corner in the 64th minute with Awujo and Lacasse coming off the Canada bench soon after. Lacasse almost scored seconds later but her header flashed wide.

Larisey came on in the 78th minute for her second Canadian cap.

Like Olympic champion Canada, Argentina and Morocco have qualified for the 2023 soccer showcase, which runs July 20 to Aug. 20 in Australia and New Zealand.

Argentina booked its ticket by virtue of its third-place finish at the Copa America Femenina in July in Colombia.

The Canadian women had won all five previous matches with Argentina, outscoring the South Americans 12-1. But Canada needed a 90th-minute goal by Sarah Stratigakis to prevail 1-0 when they met last time out, in February 2021 at the SheBelieves Cup in Orlando.

The last three meetings, including the 2008 Beijing Olympics and 2011 Pan American Games, were all decided by one goal.

The Olympic champion Canadians improved to 9-2-3 this year, with the losses coming to the top-ranked U.S. (1-0 in July in the CONCACAF W Championship final) and No. 8 Spain (1-0 in February at the Arnold Clark Cup).