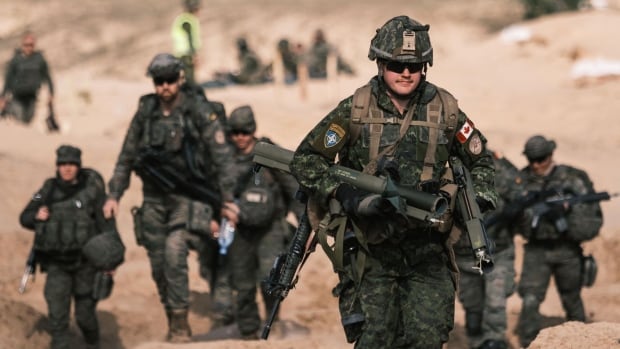 
For years, people in the defence community have been warning that the next big war would be a “come as you are” event — with each nation showing up and fighting with what it has.

The difference between victory and defeat would depend on how quickly and effectively a country could mobilize and manoeuvre its forces.

That sort of mentality permeated the Cold War. It divided Europe into two heavily armed camps for decades and cast a long shadow of nuclear terror across three generations.

The tanks, barbed wire and big guns have been gone since the early 1990s. The Liberal government’s recent activation of 3,400 soldiers, sailors and aircrew for duty with the NATO Response Force (NRF) brought with it a chilling echo of those long-ago times.

It also exposed some of the major shortfalls facing the Canadian military in both personnel and equipment.

The Canadian Army, for example, has no dedicated air defence to keep soldiers on the ground safe from attack helicopters and fighter-bombers. As former army commander and now chief of the defence staff Gen. Wayne Eyre told CBC News two years ago, Canada relies on its allies for that kind of protection.

The Royal Canadian Navy, with its newly modernized frigates, is hamstrung when it comes to forming task forces because it has no dedicated replenishment ship that can enter a combat zone (the leased supply ship MV Asterix is prevented from doing so by contract).

Canada’s current military representative at NATO, Vice-Admiral Scott Bishop, focused on the positive while testifying before a House of Commons committee on Wednesday. He was asked about the serviceability of the fighter jet fleet and noted the country has been called upon to perform a number of NATO air policing missions.

“We get a lot of credit from our allies for the job our men and women are doing in those missions,” Bishop said. “I would say we do not see any impact in terms of our ability to deliver to NATO what we have committed.”

When asked recently about the possible commitment of thousands of additional military members to Europe, Defence Minister Anita Anand said Canada has the capacity to meet its alliance commitments, even with its relatively small force of roughly 65,000 regular members and 30,000 reservists.

But there’s a difference between military capacity and sustainability.

The pandemic’s effects on military readiness

In 2019-20, before the pandemic hit, the Department of National Defence (DND) estimated that 80.3 per cent of the military could meet its operational obligations when called upon, according to federal budget documents tabled last spring. A target of 100 per cent readiness was to be achieved by 2025.

But COVID-19 has played havoc with the training exercises and courses meant to keep soldiers, sailors and aircrew ready and sharp.

Exactly how the pandemic has affected military operational readiness is not clear because the department says no up-to-date figures are available. Personnel may be generally ready to go, but there are concerns about the state of Canada’s military equipment.

Steve Day, a former special ops officer with Canada’s Joint Task Force 2, says the Russian convoy north of Kyiv may be experiencing logistical problems, but its attack on the city would be ‘horrendous’ if it reaches its target. 8:28

“There is a risk that DND/CAF may have difficulty maintaining its materiel capabilities at the right level to support operations,” the defence department’s plans warned.

The budget documents show that in 2019-20, 98 per cent of the navy’s ships and equipment were serviceable and ready to deploy as required.

The army and air force were a different story. Only 65.4 per cent of army equipment and vehicles were considered serviceable — a steep decline from the previous budget year. The air force could muster only 60.8 per cent of its fleet for active service in the 2019-20 timeframe.

Canadian troops in Afghanistan used a phrase cribbed from the Americans to describe the Ottawa establishment’s approach to the war: “The army is at war and the nation is at the mall.”

It’s that peacetime mentality that one former top army commander says Canada needs to set aside as it confronts the current crisis.

Retired lieutenant-general and former Liberal MP Andrew Leslie said previous Liberal and Conservative governments did move swiftly in some cases to equip the army for Afghanistan — but the effort quickly bogged down.

It took an independent, blue-ribbon panel led by former Liberal cabinet minister John Manley to demand that the military get all of the equipment it needed — including helicopters and leased drones — to fight the Taliban.

Leslie said the circumstances today are much more dire.

“This is different,” he said. “This has the potential to be World War Three if we get it wrong, if we don’t let deterrence do its job.

“And to make deterrence effective we have to do our job, which is to treat it with the urgency and the gravitas it deserves.”

If western democracies like Canada “get this wrong, the sociopath that is leading this assault on the innocent people of Ukraine may think he can keep going,” Leslie said, referring to Russian President Vladimir Putin.

There is a Canadian battle group of 500 troops in Latvia and a commitment to send an artillery battery of 120 troops, along with another frigate for the alliance’s standing fleet and an air force maritime surveillance plane.

Anand has said Canada is waiting for NATO’s call to deliver the 3,400 additional soldiers, sailors and aircrew. But Leslie said he believes they should go now, following the unilateral reinforcement of garrisons in Eastern Europe by the U.S. and the United Kingdom.

“We need the maximum number of troops that we’ve been promising NATO for years,” he said. “So let’s deliver as soon as possible.

The equipment could follow those troops overseas, he added.

Canada’s Ambassador to NATO David Angell, testifying before the Commons defence committee on Wednesday, said that the alliance has not yet seen any sign that Russia is prepared to attack targets outside of Ukraine.

NATO says it is prepared and has activated five defensive plans to respond should the situation escalate.

Because the Canadian military is small, Leslie said, it should change some of its regular routines in order to meet the challenge in Eastern Europe.

For decades, the Canadian army has rotated its battalions through war zones and peacekeeping duties in deployments of six to nine months. With such a relatively large force going into Eastern Europe, Leslie said, the army should recognize it needs to keep troops in theater — possibly for the duration, as it did during the Second World War.

“Worry about rotations later,” Leslie said. “If they’re going to be there for years, fine. If the troops are needed for six months or a year, they can go and they stay.

“This is an emergency. Just ask the people of Ukraine.”