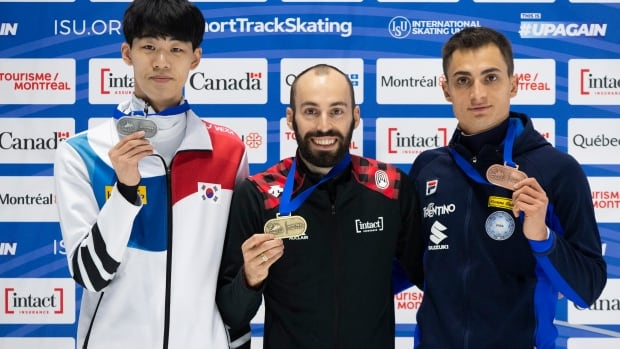 Dubois won the men’s 500-metre event for his second medal of the weekend, and Dion followed it up by topping the podium in the men’s 1,000m in an exciting finish.

Dubois, a 25-year-old from Terrebonne, Que., crossed the line in 40.345 seconds in front of the roaring crowd at the Aréna Maurice-Richard. South Korea’s Lee June-Seo won the silver medal in 40.434, while Italy’s Pietro Sighel claimed bronze (40.719).

Steven Dubois of Terrebonne, Que., wins the men’s 500m final a day after claiming silver in the 1,500 metres event at the season-opening short track World Cup in Montreal.

Fellow Korean Kim Tae-Sung finished third in 1:24.561, while Canada’s Maxime Laoun did not finish after being penalized.

Dubois won silver in the men’s 1,500 metres on Saturday after also holding off Hong Kyung Hwan in a thrilling photo finish.

Dubois won three medals in his Olympic debut last February in Beijing, including bronze in the 500. He won the men’s national title for the third straight year at the Canadian Short Track Championships earlier this month in Quebec City.

Canada continued its impressive medal haul with a pair of relay medals to close out the competition.

Kim Boutin, Danaé Blais, Rikki Doak and Renee Steenge skated to silver in the women’s 3,000m relay, which was followed by a bronze-medal performance in the men’s 5,000m relay from Dubois, Dion, Laoun and Pierre-Gilles.

Dubois picked up his third medal when Canada was awarded bronze in the men’s 5,000m relay after Italy was penalized for an illegal late pass and bumped off the podium.

Canada’s Pascal Dion, Steven Dubois, Jordan Pierre-Gilles, and Maxime Laoun are bumped to a third place finish after Italy is penalized for an illegal late pass.