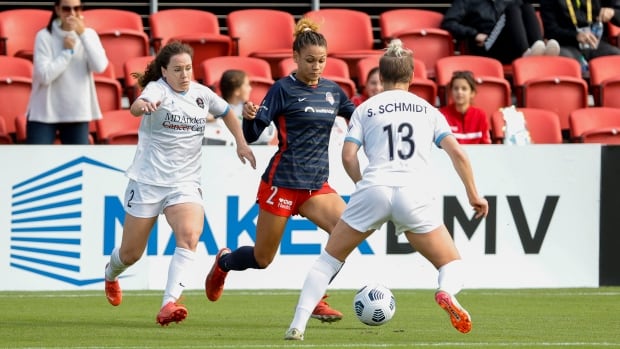 The NWSL club said Schmidt has signed a two-year contract to remain with the team through the 2024 season. Chapman has a one-year extension through the end of the 2023 campaign.

Both contracts include option years.

Schmidt joined the Dash from Germany’s FFC Frankfurt in 2019. Since then, the Canadian midfielder has made 70 appearances across all competitions for Houston, with three goals in 15 games this season.

“Keeping Sophie with us in Houston was a top priority as she has consistently been one of the most impactful players on our roster,” Dash GM Alex Singer said in a statement. “She is a leader on and off the field and the definition of a professional. I’m thrilled she will remain with us long term as we build our foundation around her core qualities.”

Sophie Schmidt of Abbotsford, B.C., ties the game for Houston but they would eventually fall to Kansas City 2-1 in the quarter-finals of the NWSL Playoffs.

Chapman joined Houston in 2015 after spending three seasons in Sweden. She has played in more than 100 NWSL matches across all competitions. The left back has started 14 games this season, helping the Dash record five shutouts.

“Allysha is a gruelling defender on the field and a dedicated teammate off the field,” Singer said. “She is the definition of grit and determination and embodies everything this club stands for. We are elated she chose to stay with the club for one more season.”

Both players were part of Canada’s Olympic champion team in Tokyo.