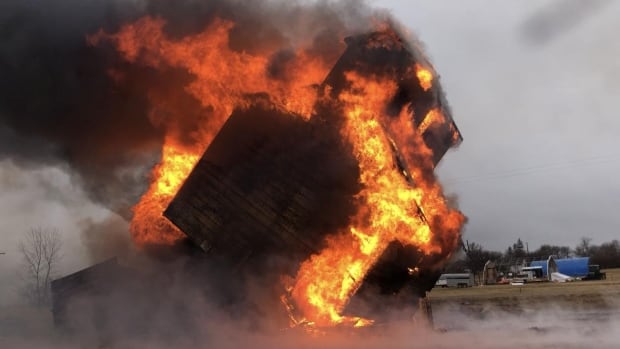 
Canada’s oldest grain elevator burned to the ground this week — 125 years’ worth of aged wood ignited in a flash by a single ember.

The Lake of the Woods Milling Company grain elevator in Elva, in southwest Manitoba, was in the process of being dismantled in order to sell the wood and other salvageable materials before it burned on Tuesday.

“It’s unbelievable. There was a spark that went up and it floated all the way up to the roof line, which is 40 feet from ground level,” said Troy Angus, who bought the structure and a neighbouring United Grain Growers elevator last year at a municipal auction.

“An ember went into a hole — it was like almost sucked into a hole the size of a football — and virtually on contact there was smoke and then there was fire.”

Angus, who owns The Den Authentic Barnwood, sources, salvages and sells antique wood. He started the deconstruction process on both elevators in January, posting materials for sale on his website.

The aim was to reclaim as much wood as possible, Angus said, but there was some waste wood.

On Tuesday, he and the crew were performing a controlled burn on some of that waste wood in a low-lying slough, which had a shallow layer of water in it.

“We were pretty much done work so we decided that we were going to stand around the fire until it had burned down and put it out, so we could go home with peace of mind that the fire was out,” Angus said.

All day, a light wind was blowing out of the south, “the perfect direction away from the elevators,” he said.

Then it all changed. In the last hour, the wind switched to coming from the east, toward the Lake of the Woods elevator.

“It was fully engulfed within 14 minutes,” Angus said.

“We knew we had to get the elevator down in a hurry,” in order to protect hydro lines above it and to ensure it didn’t collapse and damage the CPR tracks that run adjacent to it, he said.

The crew happened to have a track hoe excavator on site to push the elevator down in a controlled direction, letting it fall into a burning heap.

It was gone in an hour.

Deconstruction was in ‘home stretch’

The crew was set to begin Phase 4 of the five-phase project deconstruction process early next week, which would have involved laying the shell, or crib, of the structure onto its side and disassembling the large two-by-six spans of wood.

A connected drive shed and an office building had already been removed and dismantled.

“We were on the home stretch. We had already prepared everything so the ground was flat all the way around it,” Angus said.

“It was fortunate because we were able to manoeuvre the track hoe rapidly to undermine the one side and push the elevator over.”

By the time the fire department showed up, everything was under control, he said.

“Any other time of the year, this would have started a wicked grass fire. Considering the ground was wet from the spring and it was kind of rainy, sleety all day, that helped us as well.”

There was no loss of equipment, no loss of life, no loss of anything other than the elevator itself “so the outcome was the best possible scenario,” Angus said.

Gordon Goldsborough, president of the Manitoba Historical Society, had hoped to be there when the crib of the elevator was tipped on its side, “to witness the final hours of Canada’s oldest elevator,” he told CBC News in March.

He said Thursday he’s saddened by the fire but not heartbroken.

“The heartbreak had already passed when I came to terms with the reality that the elevator was going to be taken down, one way or the other,” he said.

He is disappointed more material from the elevator now won’t be salvaged.

“The hard part for me now is seeing the awful waste of valuable resources, given all the careful work that Troy had done to show how such old buildings can be reused constructively.”

Angus said before the fire, the crew “still did get a nice stack of wood out of the elevator, just not as much as we had intended.”

Built in September 1897, the Lake of the Woods elevator took the crown as oldest after the 1895 elevator in Fleming, Sask. — also an LOTW elevator — was razed by fire in 2010.

An elevator built in Austin, Man., in 1901 and later moved to the nearby Manitoba Agricultural Museum, is now the oldest in the country.

Some claim Port Perry has the oldest, built in 1874, but Goldsborough said it’s more of a warehouse-style design, not the crib-style synonymous with the iconic sentinels.

Angus said he’ll now focus on the United Grain Growers elevator, built circa 1916, which is at the same phase the Lake of the Woods elevator was. Angus and his team had been alternating work between the two structures.

“Next week we will be laying that one over as planned,” he said.

The UGG elevator has had sections of tin missing from the facade for decades, allowing rain and snow to get inside, but Angus said there is still exceptional wood to be recovered.

“We’re hoping that we can make up for lost ground.”