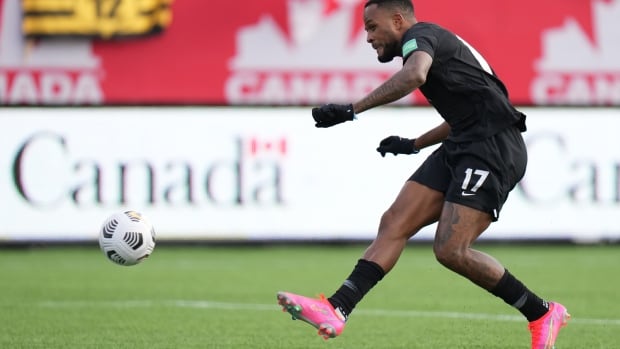 
There’s an axiom in boxing: styles make fights. A battle between dopplegangers doesn’t often make for an exciting matchup. Pit a dancer against a slugger, and then we have something to talk about.

The same holds true for soccer. The best games, at least from a tactical perspective, often see a clash of philosophies.

On Sunday afternoon at Tim Hortons Field in Hamilton, with the city’s iconic steel mills churning in the distance, the men’s World Cup qualifier between Canada and the United States didn’t make for the prettiest combination, stylistically. But Canada’s 2-0 win showed something gorgeous about this side nonetheless. John Herdman’s players know exactly who they are, other than the first-place team in CONCACAF: They are counter-punchers. And coming off an improbable five wins in a row, they are now almost certain to battle their way to Qatar.

“It’s a huge win for all of us,” midfielder Jonathan Osorio said after. “We protected our home ground. The way we fought for each other today, on that field, in a tough game — it’s amazing. It just goes to show how much of a family this team is, and how much we’re willing to fight for each other.”

The Americans looked wounded after, like boys who had just had their bikes stolen. They are clearly a team out of sorts. They had also learned no lessons from their first game against the Canadians — a 1-1 draw in Nashville forever ago, in September — when Canada sat back and waited for opportunities to pick the American locks. It was as though they thought Herdman would mix things up. Why mix things up when you have no doubt?

In Sunday’s rematch, the home team opened the scoring in what has become classic Canadian fashion. In the seventh minute, U.S. goalkeeper Matt Turner saw his high goal-kick stall in the wind and drop to the centre of the pitch. The Canadians seized their opportunity, quickly pushing the loose ball back up the middle to Cyle Larin, who had a touch-perfect exchange with Jonathan David. Larin then broke free and fired a long shot into the goal, off a stunned Turner’s outstretched fingers.

It had taken exactly nine seconds for the ball to leave Turner’s foot and find its way into the back of his net.

Sam Adekugbe turned on the jets to give Canada a 2-0 win over the United States in Hamilton. 1:27

Herdman’s tactical patience can make for extremely nervy moments. It can feel, watching this team, as though sometimes they are sitting too far back, tasked with protecting narrow leads for impossibly long. Every win, it seems, forces goalkeeper Milan Borjan to make at least one spectacular save. Every win requires one defender or another to throw himself into a heroic block. Every win sees frantic stretches when seven or eight Canadians have collapsed into their own box, standing shoulder to shoulder like infantry.

But here’s the incredible thing about this team: Time and again, they meet every one of those demands. Somehow, the wins keep coming.

True to Canada’s heart-stopping fashion, this victory wasn’t sealed until second-half injury time, when Sam Adekugbe — one of the great revelations of this stretch — led the Canadians in yet another counter-attack after an eternity of American pressure. He did it mostly on his own, slicing through three U.S. defenders and stroking a perfect shot from just outside the box into the bottom corner.

Turner didn’t move, except to throw his hands into the air in exasperation. At the other end, Borjan dropped to his knees and raised his fists in ecstasy.

It was just one more unforgettable moment in this soul-stirring campaign. Almost all of them have come on counters. Alphonso Davies’ inspirational goal at home against Panama came on a turnaround — a steal, a long ball to the edge from David, another steal, and then Davies was off to the races.

Cyle Larin’s strike in the 7th minute propelled Canada past the United States and set the Canadian men’s record with 23 international goals. 1:23

And David’s own sublime goal against Honduras last week came shortly after the hosts nearly tied the game. Instead, Borjan made a great diving save — asked and answered — and within seconds Liam Fraser connected with David on a 40-yard pass down the middle which David beautifully controlled and finished.

Now we have two more counters to choose from, separated by nearly 90 minutes of brave, physical, unyielding play. What is this team’s style? They are masters of going against the run of play.

They are also defiant to the run of history. It’s been 36 years since the Canadian men have qualified for a World Cup. These Canadian men are helping us forget.

At the end of another dreamlike evening, the stadium lights flashed on. Hamilton’s smokestacks continued puffing away, purple clouds hanging above their white steam. Journey’s “Don’t Stop Believin'” echoed over the loudspeakers. Every member of Canada’s team stood in a tight circle in the centre of the field and looked across at another man with filling eyes. The job isn’t done, they told each other.

But like inside fighters, they are always moving one step closer.

What would happen if an asteroid hit Earth today?