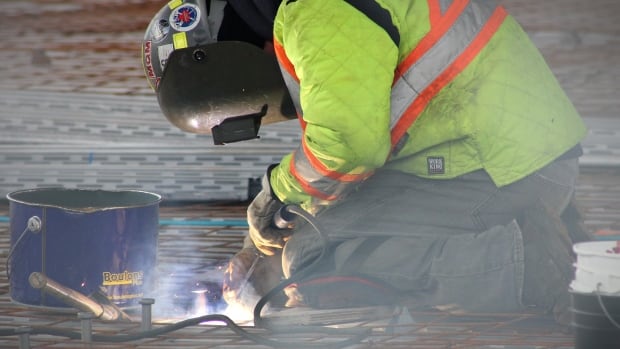 Canada’s economy eked out 0.1% growth in October and stalled in November, Statscan says


Canada’s gross domestic product expanded by 0.1 per cent in October, as growth in the service sector was barely enough to offset shrinkage in goods-producing industries.

Statistics Canada reported Friday that the GDP figure for October was a slowdown from 0.2 per cent growth seen the previous month. And early numbers for November suggest no growth at all.

Output from the oil and gas sector fell by two per cent, while the manufacturing sector shrank by 0.7 per cent.

On the other side of the ledger, wholesale trade expanded by 1.3 per cent and the public sector grew by 0.4 per cent. The accomodation and food service sector expanded by one per cent, its third month of growth in a row.

The service sector got a boost from some unexpected places during the month with the performing arts, spectator sports and related industries increasing by 4.7 per cent during the month.

Blue Jays and NHL games boosted the economy a little

That was largely due to the Toronto Blue Jays, who had five more games than usual during the month — three makeup games for ones cancelled during the regular season, and a two-game playoff.

It wasn’t just baseball. “A late start to the National Hockey League pre-season in September contributed to a higher-than-usual increase in attendance in October,” the data agency said.

While the 0.1 per cent growth in overall economic growth in October was in line with what economists were expecting, Bank of Montreal economist Robert Kavcic said the numbers paint a picture of an economy that is running in two different directions at the same time.

“When you drill below the surface you see that there’s starting to be a bit of a fracture,” he told CBC News in an interview. “Things like manufacturing and construction have really flattened out the last six months or so, whereas the service side of the economy is still running pretty strong.”

Kavcic said the economy still eking out slight growth should be enough justification for the Bank of Canada to raise interest rates at least one more time, after which point he thinks a small and short recession is the likeliest outcome.

“The timing might be a little bit in question, but I think at some point next year, financial markets are telling us, the bond markets telling us … that the economy is probably going to at least stumble a little bit next year.”