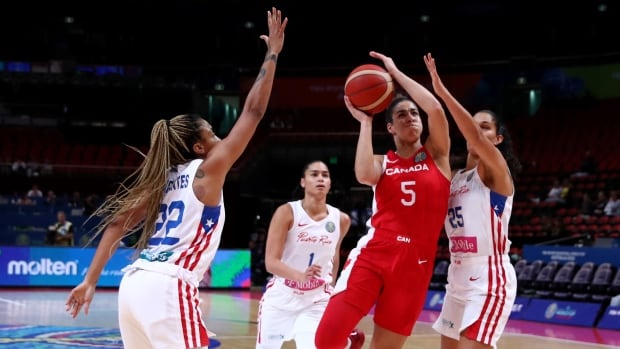 
No one on Canada’s roster was alive the last time the team won a medal at the women’s World Cup. Now the Canadians are a win away from securing one for the first time since 1986, when they captured the bronze.

Kia Nurse scored 17 points to lead a balanced Canada team to a 79-60 win over Puerto Rico on Thursday in the quarter-finals.

“It’s really special,” Nurse said. “It’s been a work in progress for us and we all felt the disappointments. Quarter-finals have been our downfall for a long time and to be able to get over that hump. … I think our country is continuing to get really excited about basketball in the grassroots programs and this is just the start of what we can accomplish.

“We have to focus on the next game before anything,” Nurse said. “That’s the US. I’ve played for a dynasty before. Part of what we were able to do is we went out there and warmed up and people thought, ‘Oh, we’ve got to play UConn today,’ and we were up 20 before the game started. I think sometimes you can get in that same mentality with the US. You have to go into the game thinking you can win the game. I play against these guys everyday, so I feel good about this. Give ourselves a chance, have some confidence. Why not, right?”

The other semifinal will pit China against either Belgium or host Australia. China advanced with an 85-71 win over France. While the medal drought isn’t as long as Canada’s, China hasn’t won one since 1994 when the Asian nation took the silver.

Canada (5-1) and Puerto Rico were tied 4-4 before the Canadians scored the next 12 points to start a 22-7 burst to close the quarter.

The lead ballooned to 44-23 at the half. Puerto Rico couldn’t really cut into its deficit in the second half thanks in part to Nurse and the fact that Canada committed only four turnovers the entire game. After spending 11 months recovering from an ACL injury, she saw her first game action in the World Cup. She had her best game of the tournament against Puerto Rico.

“It’s always our goal to win a quarter-final and make it to the semifinals. The medal rounds is where we want to be,” Canada’s Bridget Carleton said.

The loss ended a great run for Puerto Rico, which advanced to the quarterfinals for the first time in its history. The players hoped the unprecedented run could bring some joy to the island which is recovering from Hurricane Fiona.

“The word legacy sums it up,” said Arella Guirantes, who had 19 points to lead Puerto Rico (2-4). “To leave something like that for the youth that’s coming up is bigger than any win or loss that we can have. . . . It means a lot to be a part of the beginning of a legacy. I have no doubt in my mind that we’ll be back and will be better.”

Kelsey Plum scored 17 points and A’ja Wilson added 15 to lead the Americans (6-0), who will face Canada.

The Americans had run through pool play, winning by 46.2 points per game and hadn’t faced any kind of challenge. Serbia (3-2) wasn’t afraid though, going right at the U.S. The Serbians scored the first basket of the game — marking the first time the Americans trailed in the tournament.

It was back-and-forth for the first 17 minutes, with the U.S. failing to go on any major run. Then, with 2:59 left in the half and the U.S. up by five, Kahleah Copper drove to the basket and was fouled. She landed hard on her hip and had to be helped off the court by the U.S. training staff. Copper, who has been a sparkplug for the U.S. in her first tournament, didn’t return.

Plum replaced Cooper and hit the two free throws, starting a 12-0 run to close the half as the Americans led 50-33 at the break. Serbia didn’t challenge that deficit in the second half.

China (5-1) led 60-58 late in the third quarter before scoring the final six points of the period to extend the advantage to eight. France could only get within five the rest of the way

China’s run is a big turnaround from 2018 when the team finished sixth.

“I remember 2018, I know this is a very strong team,” said Chinese center Han Xu, who had 13 points and nine rebounds. “We learned a lot.”

With the win, Lauren Jackson has a chance to end her Hall of Fame international playing career with another medal. She led the team to its lone gold in the 2006 World Cup as well as a few silvers. She finished with 12 points — her most so far in the tournament.

Belgium was missing star forward Emma Meesseman, who was out with a left calf injury. She sat on the bench and cheered on her teammates.

While Belgium was short-handed, Australia welcomed back Bec Allen, who injured her ribs against Serbia. She missed two games, but returned for the quarterfinals playing just 2:25.

“I’m struggling. I needed to try it for myself,” an emotional Allen said. “I’m so happy for the girls. I’m happy we’re playing for a medal, it’s everything we wanted.”