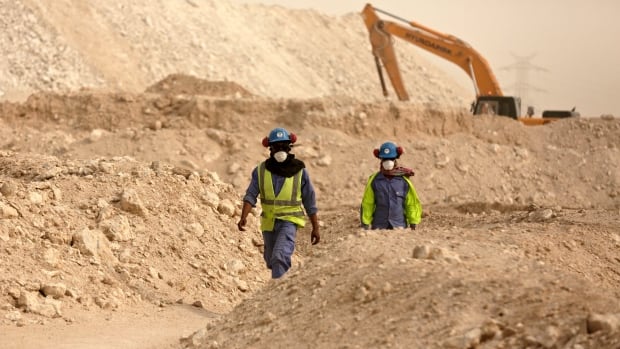 
Canada Soccer is being urged to support calls to compensate the migrant workers whose labour made the upcoming World Cup in Qatar a reality — and cost some of them their lives.

Hundreds of thousands of migrant workers have been involved in preparing for the upcoming World Cup, according to Amnesty International.

The human-rights organization wants $440 million US — a total matching the World Cup prize money — provided to compensate workers who suffered human-rights abuses while working on projects in the years leading up to the tournament.

But so far, Canada’s governing body for the sport has stayed silent on the issue. It’s spurred soccer fans and human-rights advocates alike to blow the whistle on the organization’s lack of engagement.

As Qatar prepares to host the men’s World Cup of soccer in one month, concerns persist about human rights in the conservative Muslim country. Global Affairs is warning Canadians travelling to Qatar that LGBTQ2 travellers could face discrimination or even detention.

Nivyabandi said at least seven national soccer federations — including the U.S., England, France and the Netherlands — have spoken up on this issue. But not Canada’s own team, or its governing organization.

She believes many soccer fans want their national team “to speak up against these violations and to recognize that this is happening at the expense of migrant workers in in Qatar.”

Canada Soccer did not respond to a request from CBC News for comment on Thursday.

One national men’s team player, Lucas Cavallini, told CBC News that he hasn’t had conversations with other players about controversies in Qatar.

“We’re just all basically distracted with the tournament and how things go for us and just worrying about playing football … We’re there to compete in a tournament, so it’s basically all we need to focus on.”

The issue has taken on a higher profile with members of Denmark’s national team, whose players will have an alternate jersey to wear to pay tribute to the migrant workers who lost their lives.

A prominent group of national team supporters in Canada, known as the Voyageurs, is calling on both the organization and the national team to step up.

The Voyageurs told CBC News its members have had to weigh their concerns about the treatment of migrants in Qatar against the desire to support their national squad.

“Our goal is to cheer on our players anywhere they play. In qualifying for the 2022 FIFA World Cup, this means supporting our men’s team in Qatar,” the fan club said in a statement.

“The human rights issues and the treatment of migrant workers have been well documented,” the statement said, noting this has meant club members have had to make personal decisions on whether to travel to Qatar.

The Voyageurs also expressed concerns about other human-rights issues in Qatar, beyond those directly connected to the soccer tournament preparations.

“We are alarmed with the Qatari government’s treatment of the LGBTQ+ population in the country and the many deaths that have occurred in building the World Cup stadia and infrastructure,” the club said, saying it joins with other public calls for compensation to be offered to the families of migrants workers who have died.

The Australian men’s soccer team, the Socceroos, has released a protest video speaking out against Qatar’s treatment of migrant workers and LGBTQ+ people. The World Cup kicks off in Qatar on Nov. 20.