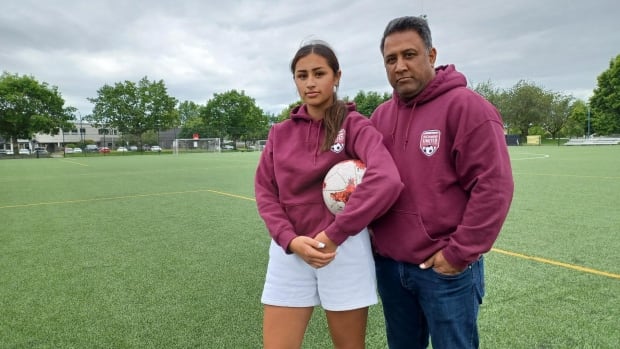 
The B.C. Soccer Association (BCSA) is warning players across the province that it could face sanctions from Canada Soccer later this year because of its “non-equitable” voting structure.

When Jaya Punia and her father Mandhir heard the news in a video posted by the BCSA on Monday, they wondered whether Richmond United — the team Jaya captains and Mandhir coaches — would still be able to compete at this weekend’s U18 A Cup Provincial Championships.

The two described the last couple of days as a roller-coaster. First, they heard games and tournaments could be cancelled. Then they learned Canada Soccer had given the BCSA until November to make the necessary changes.

“I’m super relieved,” said Jaya. “It’s our last tournament that we have together as a team before everyone goes their separate ways,” adding her team had already missed out on two seasons of practice, competitions and recruiting opportunities due to the pandemic.

BCSA President Gayle Statton said the changes required by Canada Soccer are part of a long-term overhaul of soccer governance across the country that kicked off in 2014. Adult leagues and youth districts in B.C. have been on equal footing for 24 years.

In a general assembly of B.C. members on June 1, a bylaw amendment that would give the youth districts a more equitable share of voting powers didn’t receive the 65 per cent of votes it needed to pass.

BCSA executive director Jason Elligott says if the organization doesn’t comply with Canada Soccer’s new rules, it could see its licence suspended. That would mean local leagues and provincial tournaments might have to shut down, and much-anticipated travel to other parts of Canada could no longer be financially supported by B.C. Soccer.

“The youth do understand the game,” she said in an interview. “Without the youth, there is no adult program.”

Laycock says the youth districts develop players and referees from a young age — coaching talent that eventually flows into the adult leagues.

“And we’re being disrespected, quite frankly, by the adults in thinking that we don’t know what we’re doing. It’s time for a shift that shows equity regardless of your age.”

Geoff Catliff, the president of the Vancouver Metro Soccer League (VMSL), declined an interview with CBC but agreed to answer questions by email. He said the BCSA appears to be “fear-mongering.”

Catliff says the current voting structure at B.C. Soccer is “fair and equitable, strikes a balance between youth and adult (regardless of relative size) and has worked flawlessly for 24 years.”

He says all other adult leagues in the province have similar views and feel that B.C Soccer’s proposal would disrupt the current balance. Catliff worries it would allow youth districts to pass ordinary and special resolutions (which require two-thirds support) without any agreement from adult members.

He says adult leagues need to sit down and work with the youth districts to reach a consensus that can be jointly presented to the BCSA.

Future of the game

Richmond United’s Jaya Punia also hopes B.C.’s adult leagues and youth districts can come together “for the love of the game” to find a collective solution. Even though she’ll be too old to play youth soccer next year, she’s concerned about the thousands of other young boys and girls coming up in the sport.

“I’ve seen it first-hand when I coach,” she said. “These kids get excited when they get to go to tournaments or competition-based things because it’s new environments.”

“When you take opportunities like that away from them … it’s disappointing. And I would never want to see anyone else go through that.”

Canada Soccer did not respond to CBC’s request for comment.

In a letter to B.C. Soccer’s president, forwarded to CBC by the VMSL, Canada Soccer, proposes a “rebalancing of representation” be completed in time for the BCSA’s 2022 annual general meeting in November.