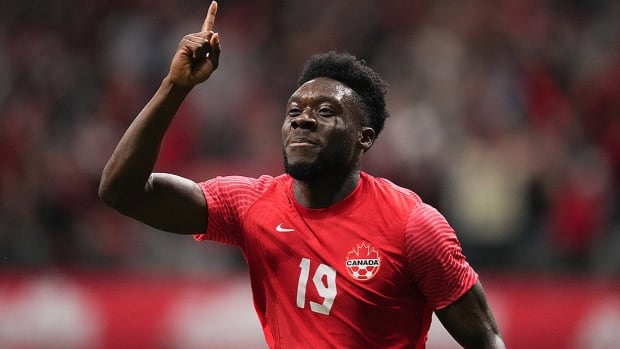 
Finally some tangible progress on the labour front with the Canadian men’s soccer team.

Canada Soccer has come to terms on an agreement with Alphonso Davies, its marquee man, on name/image likeness rights, according to a source.

The deal just needs final signatures, according to the source who requested anonymity because the agreement has yet to be announced.

CBC Sports has not independently verified the report.

“I can confirm we are very close to the finish line,” Canada Soccer general secretary Earl Cochrane said Tuesday when asked about an agreement.

Davies became the latest hot spot between Canada Soccer and its players last week when TSN reported that Davies’ representative had told Fanatics, which runs Canada Soccer’s merchandise website and sells licensed sports goods, that it no longer had permission to sell Davies’ jersey because the governing body does not have an agreement to market the Bayern Munich fullback’s likeness and image.

Cochrane, who confirmed Davies’ representative Nick Huoseh had asked for the jersey to be removed, said the governing body has been in talks with the Davies camp for several weeks about a name and image likeness deal.

Name/image likeness rights have been an issue in talks between Canada Soccer and the players ahead of the World Cup, Davies’ jersey is by far the biggest-seller among the Canadian men.

‘We only want what’s fair’

“National team players have never received royalties from jersey sales, and they should,” Nick Huoseh told TSN. “We only want what’s fair and they absolutely can and should do this.”

Huoseh did not immediately respond to a query Tuesday from The Canadian Press.

Canada Soccer’s initial understanding had been that such rights would lie with the newly formed Canadian men’s player association. But Davies’ rights actually belong to a third-party company, Davies’ own AD 19 Inc.

Parallel discussions on name and image rights are ongoing with the men’s players association.

Dissatisfaction over the state of labour negotiations caused the Canadian men to boycott a planned friendly against Panama in June in Vancouver, citing “unnecessarily prolonged” negotiations over a contract with Canada Soccer.

The new association covers players who have been called into any men’s national team camp since January 2021.

With negotiations also ongoing with the Canadian women, the decision was made to come up with an equal agreement for both men and women.

In many ways, Canada Soccer is playing catch-up with a men’s team that has gone from 0 to 60 very quickly, a process accelerated in part by its head-turning performance in a World Cup qualifying journey condensed by the pandemic.

“The reality is that we’ve only started really utilizing this success of our men’s national team over the last six to eight months. [That] is when we started selling the jerseys and the personalized name and number T-[shirts], said Cochrane.

“We’ve never had a written contract with the men as it relates to name/image likeness,” Cochrane said in an interview. “We have had with the women. We’ve had a finalized collective bargaining agreement with the women for the better part of 10 years.

“And so there’s specific language in the women’s agreement that we followed and have always followed. And that language is the language we used as it relates to the men in these situations.”

He said the women’s agreement uses what he called a “global standard” that does not require additional compensation “if you use an image of four or more athletes in a group image.”

Cochrane says the “vast majority” of players asked in the past to have their likeness used “always came back positively.”

Previously Canada Soccer would negotiate compensation with the men’s team on an event-by-event basis. The issue of World Cup compensation remains on the table.

Part of the reason the women had an agreement that covered image rights was they were more successful and more in demand than the men.

When John Herdman switched from coaching the Canadian women to the men in January 2018, the men were ranked 95th in the world, sandwiched between Belarus and the Congo. The women, Olympic bronze medallists under Herdman, were fifth at the time.

The rise has been rapid.

In December 2021, FIFA named Canada, then ranked No. 40, the “Most Improved Side” in terms of ranking points earned over the previous 12 months.

Players are entitled to negotiate their own sponsorship deals. They just can’t reference Canada Soccer or wear the national team jersey.

If a sponsor came to Canada Soccer to request a player in an ad in Canadian colours, the player would be compensated — if the ad featured fewer than four athletes, Cochrane said. Such deals are seen more as a team endorsement than a personal one, he added.

That agreement, which helped fund the launch of the Canadian Premier League, does not touch on World Cup prize money.