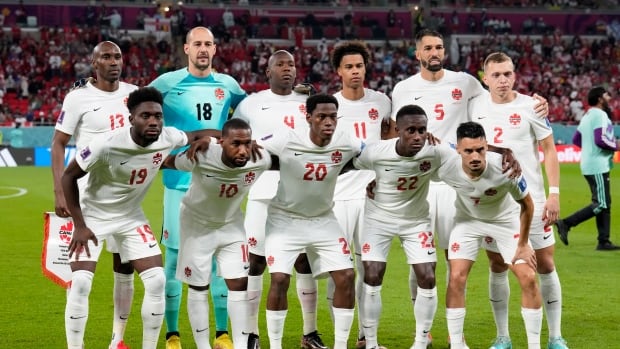 
The Canadian men’s soccer team, which won a legion of fans in returning to the World Cup for the first time in 36 years, has been voted The Canadian Press team of the year.

It marks the second straight year a soccer team has earned the award. The Canadian women won in 2021 after their Olympic gold-medal performance in Tokyo.

“It’s a huge honour,” said Canada men’s coach John Herdman. “I think it’s a testament to the sacrifices, the hard work that’s gone in over a couple of decades behind the scenes — the struggles for many of the past players and staff and coaches, for the organization, I think for everyone.”

Herdman was also coach of the Canadian women’s squad that won the CP team of the year award in 2012 after winning bronze at the London Olympics. He took over the men’s team in January 2018 when it was ranked a lowly 94th in the world.

Unlike the Canadian women, who have qualified for seven of the eight previous World Cups and have already booked their ticket to the 2023 tournament in Australia and New Zealand, the Canadian men had only ever made it to one World Cup before Qatar — in 1986 in Mexico where the team failed to register a point or a goal.

Qualifying for Qatar involved a gruelling 20-game schedule for the Canadians, who turned heads by finishing atop the CONCACAF final qualifying round-robin.

Herdman’s team sealed qualification on March 27 in a 4-0 win over Jamaica on a chilly afternoon at Toronto’s BMO Field.

“Rarely has a country — in a non-Olympic year — so rallied around a group of athletes,” said The Globe and Mail’s Phil King. “The team’s drive to qualification, its subsequent trip to Qatar, and the inspiration it provided Canadians of all ages will go down in Canadian sports history.

“I have no doubt that somewhere, a young boy playing soccer is saying, ‘Hey, maybe I’ll play in the World Cup someday.’ That’s powerful.”

The depth of support for the men’s soccer team’s endeavours was shown by the fact that it outpolled three champion outfits.

The soccer squad received 23 votes in balloting by Canadian media while the Davis Cup team, which won a first-ever world tennis title in November by beating Australia, was runner-up with 19 votes. The women’s hockey team, which won gold at both the Beijing Olympics and the world championship in Denmark, was third with five votes.

The men’s 4×100 relay squad consisting of Aaron Brown, Jerome Blake, Brendon Rodney and Andre De Grasse, received one vote for its gold-medal performance at the World Athletics Championships in July in Eugene, Ore. The relay quartet, whose Canadian-record time of 37.48 seconds was the fastest in the world this season, had the only other vote outside the top three teams.

“Deepest field I can remember. So many worthy choices,” said Rob Grant, sports team editor at the Toronto Star.

The Canadian men, then ranked 41st in the world, were up against it in Group F in Qatar, drawn alongside No. 2 Belgium, No. 12 Croatia and No. 22 Morocco. Canada drew kudos for its performance in its opening 1-0 loss to the Belgians and, thanks to Alphonso Davies’ second-minute header, notched a first-ever goal at the men’s soccer showcase before falling 4-1 to Croatia.

The Canadians closed out play in a 2-1 loss to Morocco.

“This group of players and staff over the last four years have really binded together and gone through probably the most difficult qualifying campaign through a COVID window,” Herdman said. “And then were able to step onto the world stage and inspire people through our performances, let people know we’re a football nation and that we can score goals at a World Cup against good teams.”

The degree of difficulty in Group F was illustrated by the fact that Croatia and Morocco both made it to the semifinals where they lost to Argentina and France, respectively. Croatia then downed Morocco 2-1 in the third-place playoff.

And while the Canadians did not manage a first-ever win at the World Cup, they garnered fans for their play.

“I think a lot of people expected Canada to be a passive team that would defend to counterattack.” said Herdman. “There was a refreshing excitement about the way Canada set out to play at this World Cup. And I think that’s really helped our players, that we were able to attack in a way that we got see our attacking qualities.”

Including the three World Cup defeats, the Canadian men went 7-7-1 in 2022. Now Herdman is looking ahead to the 2026 World Cup, which Canada will co-host with the U.S. and Mexico.

He believes the future looks bright after Qatar, which he calls a “solid foundation” for 2026.

“People are excited to see where this country and this team’s going to get to in 2026.” he said. “I think any stigma that was around Canada as a hockey nation [rather than soccer country] has been lifted. I think people were genuinely impressed and felt refreshed by an aggressive and front-footed style of play.”

Picture perfect: Here are 100 of our favourite audience photos of 2022