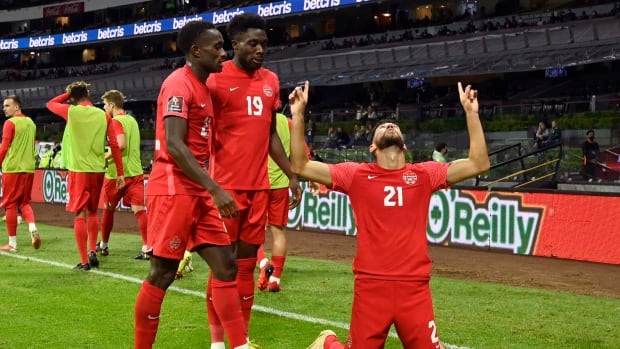 
Canada rallied to tie Mexico 1-1 on a Jonathan Osorio goal Thursday, picking up a valuable away point against elite opposition in CONCACAF World Cup qualifying play.

The Canadian men have taken their lumps at Azteca Stadium in the past. But John Herdman’s young team, despite missing some important pieces, showed in the first half and parts of the second that it can keep up with the CONCACAF powerhouse, giving as good as it got and sometimes more on hostile ground.

Tied 1-1 at the break, Mexico came on strong in a second half that was paused in the 59th minute due to homophobic fan chants. The contest was originally slated to be played behind closed doors as punishment for such behaviour in the past but FIFA cut the sanction in half to one game, meaning fans were allowed in.

The Canadian men play No. 59 Jamaica in Kingston on Sunday before returning home to face No. 68 Panama at Toronto’s BMO Field next Wednesday.

In other play Thursday, the U.S. defeated Jamaica 2-0 in Austin and Honduras tied visiting Costa Rica 0-0.

After an even start, Mexico went ahead in the 22nd minute after Chucky Lozano found Jorge Sanchez behind the defence The Mexican fullback controlled the ball with his right foot then shot with his left, sending the ball through Maxime Crepeau’s legs.

The play started with Mexican goalkeeper Guillermo Ochoa at the other end of the field. Three passes later, Lozano had the ball in front of the Canadian penalty box and spotted Sanchez, who had his arm raised as he got behind fullback Richie Laryea.

Osorio tied it up in the 42nd minute, beating Ochoa from a thrown-in after taking a slide-rule pass from Alphonso Davies that cut out four Mexican defenders. Osorio controlled the ball then slotted it in the corner for his seventh goal for Canada.

The Toronto FC midfielder is no stranger to goals at Azteca, having scored in a 1-1 tie with Club America in April 2018 that moved the MLS side into the Scotiabank CONCACAF Champions League final.

Mexico (2-0-2) came into the international window atop the so-called Octagonal standings in the final round of qualifying in the region. Canada (1-0-3) was second on goal difference after beating No. 65 El Salvador and tying No. 63 Honduras and the 13th-ranked Americans.

The Canadians came into the match with a 4-20-8 record against Mexico in senior play since 1957. Canada was 1-12-7 against the Mexicans in World Cup qualifying play, with the lone win coming in October 1976 in Vancouver.

Canada and Mexico last met in late July in the Gold Cup semifinal, with the Mexicans needed a 99th-minute goal to win 2-1 in Houston.

The Canadian men were 0-6-1 against Mexico all-time at Azteca and had been outscored 16-0 there over the last four matches there dating back to July 1993.

Canada was without veteran goalkeeper Milan Borjan (Red Star Belgrade, Serbia), who is recovering from COVID-19, as well as captain Atiba Hutchinson and forward Cyle Larin (both Besiktas, Turkey) and striker Lucas Cavallini (Vancouver Whitecaps) who are recovering from injury. The hope is they might be able to join the team later in the window.

Canada Soccer had previously said veteran forward Junior Hoilett (Reading, England) and midfielder David Wotherspoon (St. Johnstone, Scotland) would meet the team in Jamaica ahead of the weekend match against the Reggae Boyz so as to avoid the quarantine that visitors to Mexico have to undergo when returning to Britain.

The Canadian starting 11 came into the match with a combined 219 caps, with 44 of those belonging to Osorio. Six of the starters were 24 years or younger.

Canada had the best early scoring chance with Ochoa parrying Laryea’s hard shot in the 15th minute after the Toronto FC fullback combining with Davies, raced down the left flank and then headed inside. The rebound came to Tajon Buchanan, who hammered his shot high.

Buchanan and Davies, both speedsters, almost combined in the 31st minute when Buchanan left several Mexicans in his dust and curled in a wonderful low cross through the box. An onrushing Davies got a foot to the ball at the far post but could not steer it on target.

Canada threatened again in the 40th with Ochoa making a reflex save off Vitoria’s close-range header from a Stephen Eustaquio free kick.

Crepeau and Lozano tangled early in the second half as the Canadian ‘keeper tried to distribute the ball but cooler heads prevailed.

There was more niggle in the 56th minute when Jesus Corona kicked out at Laryea after both went down near the Canadian penalty box. El Salvador referee Ismael Cornejo showed yellow cards to both players, meaning Laryea will be suspended for the Jamaica game after picking up a second caution.

Soon after Corona tested Crepeau from in-close at the near post after a Mexican throw-in.

Canada defender Alistair Johnston came close to an own goal in the 64th but his clearing header, keeping the ball away from a waiting Raul Jimenez, bounced off the crossbar.

Jimenez, in his first international game since suffering a fractured skull playing for England’s Wolves last November, scored in the 66th but the goal was called off for a foul.

Herdman brought on Sam Adekugbe, Liam Fraser and Liam Millar in a triple change in the 77th minute. Charles-Andreas Brym came on late for his fourth Canadian cap.

Come March, after the eight remaining teams have each played 14 games, the top three finishers in the CONCACAF final qualifying round-robin will represent North and Central America and the Caribbean at Qatar 2022. The fourth-place team will take part in an intercontinental playoff to see who joins them.

The Canadian men have not made it to the final round of qualifying in the region since the lead-up to France ’98.