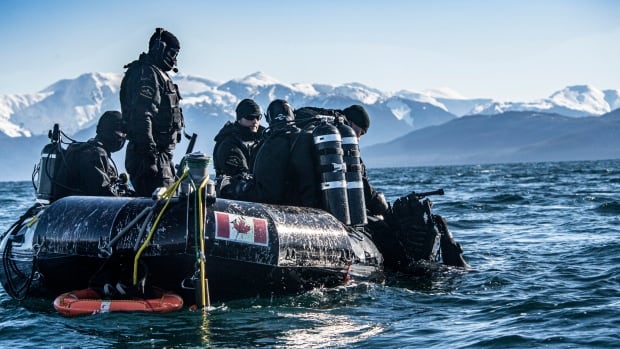 
National Defence Minister Anita Anand is planning a trip to the Arctic, as she gathers her allied counterparts in Arctic countries for a joint discussion on the security of the region in light of Russian aggression in Ukraine.

Anand told CBC News she spoke to all three territorial premiers on Friday about her intention to visit. The minister said she is also having ongoing discussions with the defence ministers of Sweden, Finland, Norway and Denmark.

“What is so important is the collective will to act together as allies regarding Arctic sovereignty,” Anand said.

Anand said she will soon introduce a spending plan for modernizing the North American Aerospace Defence Command (NORAD), a bilateral organization between the U.S. and Canada created to defend the continent from air attack.

“It is extremely important for NORAD modernization that we have these continued discussions,” she said.

Ottawa has committed to work with the U.S. on replacing the North Warning System with technology that includes next-generation over-the-horizon radar systems that can detect targets at long ranges.

Military exercises to have ‘deterrent and defensive effect’

Canada began an Arctic air defence operation Monday, known as Noble Defender, with the U.S. that will run until March 17 and include flying over sparsely populated areas at high altitudes.

“This exercise will have a deterrent and defensive effect,” Anand said.

“We are very much aware and prepared to undertake additional exercises as necessary.”

The Canadian Armed Forces on HMCS Brandon are additionally training in mine warfare with the U.S. Navy and Coast Guard as part of exercise Arctic Edge off the coast of Juneau, Alaska.

“The theme of the exercise really is building relationships with other security partners in the Arctic,” said Lt.-Cmdr. Mike Wills, the commanding officer of HMCS Brandon.

“The conflict in Ukraine didn’t result in the scheduling of this exercise, but certainly it perhaps highlights the importance.”

Time for Canada to step up, critics say

Russia has been flexing its military presence in the Arctic like never before using nuclear submarines and nuclear-powered icebreakers, even laying claims to a bigger chunk of a region within 200 nautical miles from Canada’s coastline.

“Canadians’ safety is at risk if we do not step up to the plate and adequately defend,” said Conservative MP Bob Zimmer, critic for northern affairs and Arctic sovereignty. “We need leadership.”

Zimmer said Canada’s response to Russia’s military buildup is overdue and he doesn’t think Canada is ready for an offensive encounter in the Arctic.

“This is about investing in the infrastructure they’ve ignored for quite some time,” she said.

“We need peace and stability right across the north,” Silver said.

“Foreign countries are paying a lot of attention to the north and it’s time that Canada does the same.”

Silver said he’s been concerned about Arctic sovereignty for years, and intends to raise the issue at the Council of the Federation meetings this summer with the prime minister and premiers.

The Inuit Circumpolar Council (ICC), which Russia chairs, put its work on hold due to the invasion of Ukraine.

The ICC, which emerged from the Cold War to strengthen unity among Inuit, has long called for the Arctic to be declared a zone of peace — something Dorough expects the council to reaffirm to a “much higher level of priority” due to the conflict in Ukraine at its July 2022 general assembly.

It’s conceivable that war between Russia and NATO would extend to the North American Arctic, but it’s more likely to extend to the European Arctic near Norway, the Barents Sea and North Sea, according to Michael Byers, Canada Research Chair in Global Politics and International Law at the University of British Columbia.

He said Canada needs more surveillance in the region, but not because the country should be worried about a possible Russian attack.

“Our involvement in this is through NATO and the theatre is in Europe, it’s not in the Canadian Arctic.”

How accurate are long-range forecasts? The science behind predicting the weather