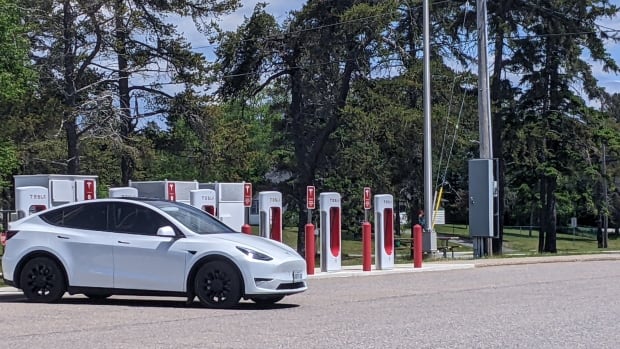 Canada can build an electric vehicle industry worth $48B a year — but it must act now: report


As climate change shows its growing destructive power in floods and droughts worldwide, even strong advocates for the transition from using fossil fuels to battery-powered electric vehicles know EVs won’t be enough to fix the problem.

But as the North American auto show opens to glitz and fanfare, a new report from two reputable Canadian research groups says that Canada has a brief window to be a major player in transforming an industry worth hundreds of billions of dollars annually into something more climate friendly — and to make money doing it.

Not only that, but the report suggests Canada has a chance to break a long tradition of exporting minerals and raw materials for others to turn into high-value goods. Instead, by building a homegrown electric vehicle supply chain, the country has the opportunity to get in at the bottom and create a large and lucrative domestic industry.

“Canada has all the right ingredients to be a battery powerhouse,” said Evan Pivnick, from Clean Energy Canada, one of the authors of the new report. “But it’s vital that Canada acts swiftly and decisively, or it risks squandering thousands of jobs and billions of dollars.”

The reason for the urgency, say the report’s authors, is that after a false start that could have squeezed the Canadian auto industry out of the United States’s plan and launched a new trade war, the Biden administration has instead issued a revised plan that takes account of the integrated nature of North American automotive manufacturing.

WATCH: U.S. expands tax credit to EVs made in all of North America

Canadian automakers breathed a sigh of relief after a U.S. climate bill that would have seen consumer tax credits for American-made electric vehicles expanded to include North American-produced EVs, batteries and critical minerals.

According to Brendan Sweeney, who has spent decades researching Canada’s automotive sector, the industry has now moved away from an existential threat to a stunning new opportunity. Not only does the country have established automotive parts and assembly manufacturing, but uniquely, it also has the essential ingredients to create the new electric battery infrastructure.

With the announcement by Stellantis and LG Energy of a Windsor battery manufacturing plant, Canada has another vital piece of the industry. But while the country could see two or maybe three more such operations before the end of the decade, Sweeney said that is not Canada’s biggest advantage.

“Where we really see a unique opportunity for Canada [is to] build something that doesn’t exist, what we refer to as the integrated battery materials industry,” said Sweeney, managing director of the Trillium Network for Advanced Manufacturing, in a telephone interview this week.

“Canada is the only democratically governed nation in the world that has all of the minerals necessary to support a comprehensive EV supply chain,” he said. In a world beset by autocrats and sabre-rattling, that matters.

The key vision of the plan outlined in the report is that Canada would not just become a source of supply of raw materials for export to China, Germany or a factory in Arizona, but an entire industry.

Clearly government licensing and transportation links, similar to former prime minister John Diefenbaker’s Roads to Resources plan will be needed to extract the key minerals. But the second essential step is to develop an entire industrial strategy not seen in Canada since the 1960s, said the report’s authors.

“We have to avoid the errors we made for 150 years,” Sweeney said. And those errors include what Canadian economic historians call the “staples trade” where Canada exported wheat, fish, and iron for others to turn into high-value goods.

Instead, modelled on the Canadian fertilizer and food processing industries and the traditional auto industry itself, the idea is to create high-value battery components.

“We turn the minerals, the metals that we mine in Canada into really highly value-added cathode active materials, anode materials, electrolyte [the solution inside batteries],” said Sweeney with a certain zeal. “We do that in Canada.”

By combining Canada’s auto assembly, parts business, battery making and mining proficiency with the expansion of the country’s existing battery materials expertise, the report says Canada is ideally placed to become a global leader, adding an estimated $48 billion a year to the economy and creating hundreds of thousands of jobs across the country.

The plan would require billions of dollars in federal and provincial seed money, but most importantly, it would require a thought-out industrial strategy of the type developed by other industrial powers like Germany, linking each part of the integrated sector and planning it with industrial players.

“Building out mines and building batteries and electric vehicles, like all industry, is going to have some environmental impacts,” said Merran Smith, chief innovation officer at Clean Energy Canada. “You need to make sure that the mining is done in the most environmentally and socially sound way, plus that it’s powered by clean electricity.”

With 80 per cent of the country’s electricity generated without carbon, that is another way in which Canada has an advantage, allowing not just the manufacturing but the minerals and the components themselves to be largely carbon-free. She compares that to the world’s largest battery and EV producer, China, which still makes most of its power using coal.

As Smith said, cars are only one part of a global battery market expected to be worth at least $360 billion US by 2030. She said Canada has the potential to rank in the top five in the battery supply chain, which only has further to grow.

According to the International Energy Agency, by 2040 demand for battery minerals will have expanded by 30 times — not just for EVs, but for storage and other uses.

And she said that centre is a place Canada needs to be.