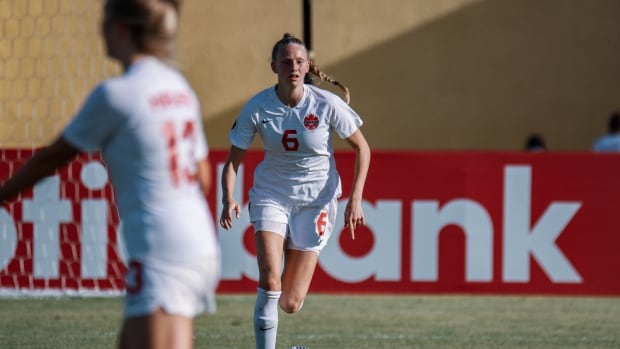 
Anna Hauer and Amanda Allen scored two minutes apart early in the second half Sunday as Canada qualified for the FIFA U-17 Women’s World Cup with a 3-0 victory over Puerto Rico in the third-place game at the CONCACAF Women’s Under-17 Championship in Santo Domingo, Dominican Republic.

Rosa Maalouf padded the lead with a late goal on a hot afternoon at Estadio Olimpico Felix Sanchez.

“I think all of us are just completely overjoyed,” said Canada’s Clare Logan. “We worked so hard to get here. We put so many hours in on the field, off the field, together as a group and we’re just so happy to be able to secure that spot in the World Cup.”

The Puerto Ricans, competing in the CONCACAF tournament for just the third time, proved to be stubborn opponents — at least for the first half. But the Canadians wasted little time taking control after the break.

Hauer, a second-half substitute, broke the deadlock in the 51st minute after Logan found her alone in front of goal. Hauer whiffed on her first shot attempt but was on target with the second, with Puerto Rico goalkeeper Ariana Anderson out of position after reacting to the first attempt.

Allen added to the lead two minutes later by curling in a terrific shot from the edge of the penalty box as the Canadians secured the last berth for North and Central America and the Caribbean at the U-17 World Cup in October in India.

Maalouf made it 3-0 in the 86th minute, knocking in a feed from fellow substitute Jaime Perrault. It was the 12th goal of the tournament for Maalouf, a 15-year-old from Ottawa who started the day as the competition’s leading scorer.

The defending champion U.S. met Mexico later in the day for the CONCACAF title. Both teams secured their berths at the World Cup with their semifinal wins.

Canada also finished third at the CONCACAF Women’s Under-20 Championship earlier this year in the Dominican Republic, qualifying for the FIFA U-20 Women’s World Cup in August in Costa Rica.

The Canadian women have now qualified for all seven editions of the FIFA U-17 Women’s World Cup, highlighted by a fourth-place finish in 2018 when they downed Germany 1-0 in the quarter-finals before falling 1-0 to Mexico in the semifinal. Canada then lost 2-1 to New Zealand in the third-place game.

Canada came close in the 11th minute off a corner on a powerful header by Ella Ottey that produced a fine reflex save from Anderson.

Canadian captain Zoe Markesini threatened off another corner in the 33rd minute, shifting the ball from one foot to another to make room for a shot. But Anderson was up to the task again.

Canada’s Renee Watson hit the post in the 43rd minute with a long-range left-footed shot that Anderson may have got her fingertips to. Two minutes later Nyah Rose sent an inviting low cross across the Puerto Rican goal but Allen, battling a defender, could not get her foot to it to tap it in.

Hauer and Maalouf came on for the second half. Maalouf came close in the 80th but Anderson got a foot to her shot.

The Canadians ended up in the third-place game after losing 3-0 to the U.S. in Friday’s semifinal. Puerto Rico lost 5-0 to Mexico in the other semifinal.

Canada went 4-0-1 in reaching the semifinal with wins over the Dominican Republic (10-0) and Bermuda (5-0) before tying Jamaica 1-1 to finish atop Group F on goal difference over the Reggae Girlz. The Canadians then beat Honduras 4-1 and Costa Rica 3-0 in the knockout rounds.

The 2020 CONCACAF tournament was cancelled due to the pandemic. The U.S. dispatched Mexico 3-2 in the 2018 final.