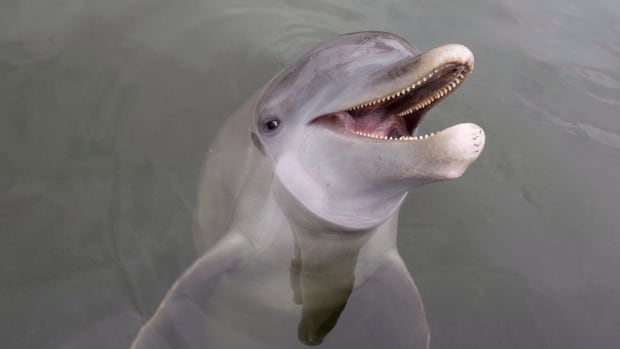 As It Happens6:33Can dolphins get Alzheimer’s disease?

Dolphins, like people, are incredibly intelligent and social creatures. And also like people, they may be prone to the ravages of cognitive decline as they age.

A new study, published in the European Journal of Neuroscience, has found several markers of Alzheimer’s in the brains of dolphins who became stranded in shallow waters and died.

This doesn’t definitely prove the sea creatures can get Alzheimer’s disease, cautions Mark Dagleish, one of the study’s lead authors.

But it does offer a possible explanation for why entire pods of dolphins — creatures known for their ability to navigate the oceans — sometimes end up trapped in dangerously shallow waters.

“It’s always very distressing dealing with these sorts of mass strandings,” Dagleish, the head of anatomic pathology of the University of Glasgow’s School of Biodiversity, told As It Happens guest host Paul Hunter.

To answer that question, Dagleish and his colleagues examined the brains of 22 older dolphins from five different species, all of whom had been stranded in Scottish coastal waters.

Within that group, three dolphins — a long-finned pilot whale, a white-beaked dolphin and a bottlenose dolphin — displayed markers used to diagnose Alzheimer’s in humans.

Those include the build up of amyloid-beta plaques, a type of protein associated with Alzheimer’s, and the accumulation of phospho-tau and gliosis, a change in cell numbers in response to central nervous system damage.

“We were fascinated to see brain changes in aged dolphins similar to those in human aging and Alzheimer’s disease,” Tara Spires-Jones, a University of Edinburgh neuroscientist and one of the study’s co-authors, said in a press release.

“Whether these pathological changes contribute to these animals stranding is an interesting and important question for future work.”

When diagnosing Alzheimer’s in humans, doctors not only need to identify physical evidence in the brain, but also the associated behavioural changes — things like memory decline, or difficulty carrying on a conversation and completing tasks.

The same is true with dolphins, Dagleish said. To say with certainty that they have dementia, scientists would have to prove the animals were exhibiting signs of cognitive deficit.

“That’s something that you can only assess in … a live animal. Obviously, we only had access to dead animals,” Dagleish said.

But the study does lend credence, Dagleish says, to what’s known as the “sick leader” theory.

“Nobody’s actually worked out exactly why you get these mass strandings when many of the animals appear healthy. And one of the theories is that the leader — the lead animal — may be sick,” he said.

In other words, if a dolphin has Alzheimer’s, it might impair its temporal and spatial awareness, causing it to unwittingly lead its pod astray.

And because dolphins are highly social, the pod members are unlikely to abandon a sick leader.

“This very much a theory and a hypothesis at the moment, but it’s something that we may, in time, be able to back that up,” Dagleish said.

Dolphins in captivity have excellent memory

Jason Bruck — a biologist at Stephen F. Austin State University in Texas who has studied dolphins’ social behaviour and memory — says these findings are “a great first step in trying to explain the phenomenon of mass stranding” in dolphins and some other aquatic mammals.

“The next step is to see if this neurological phenomenon relates to observable cognitive deficits,” Bruck, who wasn’t involved in the study, told CBC in an email. “This may be difficult to study in the wild, however.”

Bruck’s own research shows that bottlenose dolphins exhibit no signs of memory decline as they get older. In fact, they even have better long-term memories than elephants, an animal so famously retentive, there’s an idiom about them.

But that 2013 study looked at dolphins who lived in zoos and aquariums.

“This, in itself, is an interesting contrast and could possibly signal some sort of environmental cause for the neurological data reported here,” Bruck said.

Dagleish says environmental factors are definitely something to consider for future studies.

Some of the species his team studied are deep divers, he said, and it’s possible that exposing their brains to low oxygen levels for a long period of time is contributing to the accumulation of Alzheimer’s-like conditions in their brains.

This type of research could also have implications for how we understand Alzheimer’s in humans, he said.

“If we can look at more animals of different species … that possibly gives you places where you can intervene in terms of either treating or slowing down or possibly even preventing Alzheimer’s,” he said, before adding the caveat: “This is a long way down the track.”