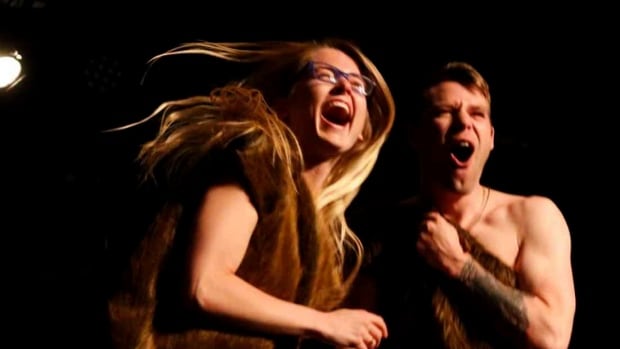 Can comedy be a climate solution?


Our planet is changing. So is our journalism. This weekly newsletter is part of a CBC News initiative entitled “Our Changing Planet” to show and explain the effects of climate change. Keep up with the latest news on our Climate and Environment page.

Sign up here to get this newsletter in your inbox every Thursday.

Can comedy be a climate solution?

Given the onslaught of extreme weather events in the last year, many would say that climate change is no laughing matter. But two academics say otherwise.

Beth Osnes is an associate professor of theatre and performance studies at the University of Colorado, and in her research, she has noticed that humour influences decision-making and societal change.

So she teamed up with Max Boykoff, an associate professor in environmental studies at U of C, to concoct a social experiment that meshed climate communication and comedy.

“What we seek to do through our research is to understand under what circumstances [we can] increase the ways in which people are finding pathways to talk about climate change and from there, inspiring greater engagement in action,” said Boykoff.

It’s a critical inquiry at a time when relatively few people seem to be talking about climate. According to a study done by Yale University and George Mason University, less than 40 per cent of people in the U.S. are discussing global warming with others “often” or even “occasionally.”

Osnes and Boykoff hypothesized that climate comedy could be one fix.

They put their theory to the test in their creative climate communication course and the International Comedy & Climate Change Short Video Competition. They tasked students with developing comedy sketches around climate issues and solutions (as in the photo above). One video from 2021 is a satirical Christmas commercial from fossil fuel giant Exxon that notes “this holiday season … we’re spreading massive disinformation — talk about gaslighting!”

“[The students] are not making light of the issue of climate change, but they’re bringing light to this issue and I think that’s the thing that they carry through this experience,” said Osnes. She stressed that comedy helps us “find what unites us above what divides us.”

She and Boykoff say it starts with meeting people where they are. New York-based standup comedian Chuck Nice knows this well.

His jokes range from poking fun at self-righteous eco-warriors to ragging on the increasingly chaotic fluctuations in the weather to teasing the public and media on their slow response to climate change. No person or topic is off-limits.

Nice has been marrying science and comedy for years on the podcast StarTalk Radio, with noted astrophysicist and author Neil deGrasse Tyson. In his spare time, Nice works remotely on an ongoing basis with Osnes and Boykoff’s students to workshop their comedy sketches for their end-of-year event, Stand Up for Climate Change.

He says comedy relieves the awkwardness and tension of difficult conversations and gets people talking.

“There have been several studies done where when you encounter emotions while you are learning, you retain what you are learning much better,” Nice told What On Earth host Laura Lynch. “So if I elicit the happiness [or] chemical response that comes along with laughter [and] if I induce that while I’m giving you information, you’re more likely to accept the information.”

Osnes, Boykoff and Nice proved that during their last climate comedy standup event in April 2022, which took place in various U.S. cities. Approximately two-thirds of the audience did not know they were attending a climate-themed comedy show, but it didn’t stop numerous people from approaching the organizers afterwards to discuss climate action resources. The jokes clearly got audience members thinking.

“I would say to everyone, no matter who you are, that there is a way and a place for you in this solution,” Nice said.

“I just finished reading about the Australian hairdresser who proactively addresses the issue of climate change with her clients, and has subsequently branched out into leading workshops to teach others in her profession how to initiate the same outreach with their clients. Reading this article truly made my day, brought a smile to my face and uplifted my spirit; how refreshing and inspirational it is to know that there are people like Ms. Garcia out there who are taking the initiative to make a difference in the fight against climate change. Kudos to Ms. Garcia!”

CBC News recently launched a dedicated climate page, which can be found here.

Also, check out our radio show and podcast. This week, we talk to young Black Canadians about how they’re breaking barriers in the climate movement and we hear from the “father of environmental justice” about where the struggle began. What On Earth now airs on Sundays at 11 a.m. ET, 11:30 a.m. in Newfoundland and Labrador. Subscribe on your favourite podcast app or hear it on demand at CBC Listen.

The Big Picture: One small step toward less e-waste

Earlier this week, MPs in the European Parliament voted to solve an issue that has bedevilled tech users: incompatible charging cables. The result is that the USB-C charging port will be the standard for all small- and medium-sized electronic devices sold in the EU by 2024.

It’s thought to be the first legislation in the world meant to standardize charging ports for items like phones and laptops. Not only will it remove a major irritant for many consumers, but it is being touted as a win for the environment, in that it will produce less electronic waste.

Most manufacturers use a version of the USB standard (which stands for Universal Serial Bus), but Apple famously does not. It employs its proprietary Lightning port (seen on the left in the photo below) across most of its products. Apple has long lobbied against charger standardization, arguing it stifles innovation and that it would in fact create more e-waste.

Alex Agius Saliba, who led the negotiations for the 27-member EU on this issue, acknowledged that outright banning old chargers would have an adverse impact on consumers and the environment, which is why the bloc is urging manufacturers to gradually phase out older products.

Much of B.C. is experiencing drought and ongoing hot weather has left streams running dry, leaving no way for some salmon to return to their spawning grounds, killing hundreds in a mass die-off on the province’s central coast.

The Pacific Salmon Commission initially projected a return of 9.8 million fish this year. By August, predictions were reduced to 5.5 million. This was readjusted again, on Sept. 28, to 6.8 million.

There were record-low rainfalls in September, and dry weather and heat have continued into October, a month known for rain. For some migrating salmon, that lack of moisture is proving deadly.

This past weekend, researchers discovered piles of lifeless fish — mostly pink salmon — floating dead or plastered together along the bottom of the Neekas near Spiller Channel.

Photos and videos taken by German anthropologist Sarah Mund, who was helping Simon Fraser University salmon counters, show what appear to be hundreds of salmon. Many were lying limp over logs or along a creek bed, or floating in shallow, warm waters of a creek that’s usually much deeper this time of year.

“To see it … come to this magnitude is quite shocking,” said William Housty, the conservation manager for the Heiltsuk First Nation in Bella Bella.

He estimates that if this scene is extrapolated over many creeks, it’s likely hundreds of thousands of fish have died along rivers and streams in their territory this year because of the warm temperatures and low water levels.

While it’s not unheard of for salmon to suffer or die because of low rainfall, this mass die-off is “abnormal,” said Kyle Wilson, an applied quantitative biologist with Central Coast Indigenous Resource Alliance.

He blamed it, in part, on the hot, dry weather, followed by a bit of recent rain that he says “tricked” salmon to head upstream, to their deaths.

He predicts very few pink will survive in this creek — and only in deeper pools higher up the waterway. But it may not be a total catastrophe, he says, as pink salmon from other river systems may opt to spawn in the Neekas River.

Until then, Wilson says the fish loss will affect predators like bears, wolves and eagles. It will also affect the commercial and Indigenous fisheries that rely on the salmon that return to central B.C. streams each fall.

The same scenario is playing out in other parts of the province. Tens of thousands of finger-length salmon fry are released each year from streams into the Burrard Inlet. Dave Bennie, who has volunteered at the Noon’s Creek salmon hatchery for the Port Moody Ecological Society for 28 years, also calls it “abnormal.”

For now, surviving fry hide in the tiny pools below the rocks, but he says that leaves them vulnerable to predators like otters and blue herons, not to mention the unseasonable heat. He fears for all the Burrard Inlet hatcheries.