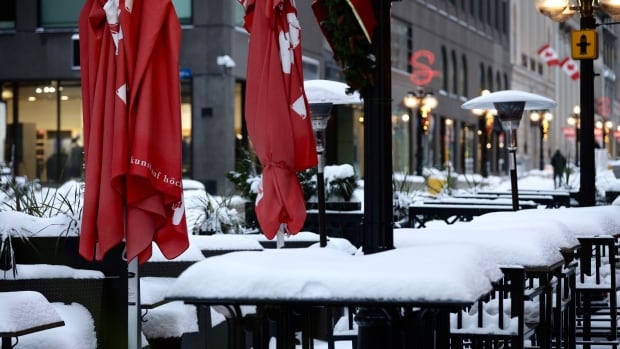 Businesses weigh options as convoy, other protests set to roll into Ottawa


While some Ottawa businesses are wondering whether to shut their doors this weekend as a convoy of truckers makes its way to Parliament Hill, others are rolling out the welcome mat.

The convoy includes truck drivers from across the country and others broadly opposed to public health mandates.

They plan to protest on Parliament Hill, but Ottawa police have said there are still a lot of unknowns, including when most of the convoy is expected to arrive and how long it and other protesters could remain.

Police are urging people to avoid unnecessary travel downtown as early as Friday. The force says officers will be on the ground monitoring this weekend’s situation. They have said that while the main convoy has been relatively peaceful in its cross-country journey, there are concerns about other protests and counter-protests.

That’s led some businesses to weigh their options about whether to close.

“We’ve been here since 1977, so we’ve seen all types of protests,” said Matthew Dixon, who owns Dixon Jewellers near Parliament Hill.

“We’re accustomed to keeping our ear to the ground and trying to figure out what’s going to happen.”

Kevin McHale, executive director of the Sparks Street BIA, said he’s been hearing some concerns from businesses along the pedestrian-only street just south of Parliament Hill.

The warning to stay away from the downtown couldn’t come at a worse time, McHale said, as it could have been an otherwise busy weekend for retailers.

“Downtown’s already kind of in this COVID slump,” he said. “And having [a protest] like this taking place on the Hill is just going to further drive residents to not want to come down to the core.”

Yet some businesses are welcoming the convoy and its calls to remove COVID-19 mandates that have affected business owners’ livelihoods across the country.

The restaurant is offering members of the convoy free takeout until Saturday to show their support.

He expressed frustration with “the way that we’ve been treated and everything that’s gone on.

Tom Orr also plans to keep the Antrim Truck Stop in Arnprior, Ont., west of Ottawa, open and has cleared out more space in the four-hectare parking lot in anticipation of a busy weekend.

“I would be an idiot to close my business to trucks or to the general public. I’d never judge anyone that comes into our business, no matter what their beliefs or views are,” the former truck driver told CBC Radio’s Ottawa Morning.

Michelle Groulx, executive director of the Ottawa Coalition of Business Improvement has been telling businesses to remain open if they feel comfortable. But he has been hearing some worries.

“As far as it is right now, it doesn’t seem to be a safety issue, but of course things can change very quickly and so we have asked businesses to remain alert,” he said.

“They don’t want to create tension points, but at the same time, they want to make sure that their clients are safe, that their staff are safe and that they don’t put anyone at risk. I guess that’s the unknown of this protest.”

‘We’re here to stay’: Quebecers who fought to get Muslim cemeteries built say they’re a sign of progress

People say they want COVID-19 to become ‘endemic.’ But what does that really mean?