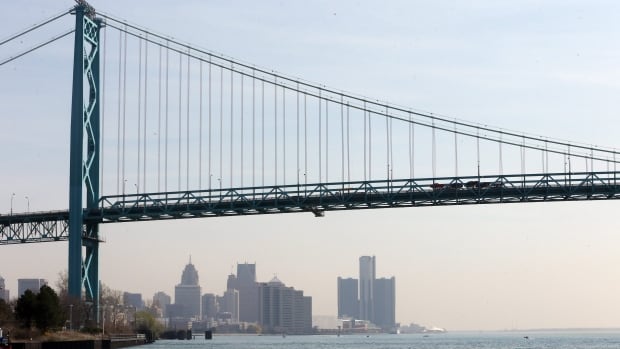 
Organizations representing businesses in some border communities have banded together to ask the federal government to lift all COVID-19 border restrictions and stop requiring use of the ArriveCAN app.

In a news release, a coalition of eight chambers of commerce in Ontario, New Brunswick and Manitoba said the restrictions are not only slowing down border crossings, but they’re having a detrimental effect on tourism.

“We’ve been seeing that because of the restrictions, because of things like ArriveCAN, businesses on both sides [of the border] are not able to bring over people and conduct business in the normal manner, which is affecting businesses and their volume of business on both sides,” said Rakesh Naidu, chief executive officer of the Windsor-Essex Regional Chamber of Commerce, one of the groups backing the call.

The organizations say wait times at the border have grown by up to two hours, despite a reduction in traffic, and tourism spend still lags behind what it was prior to the pandemic.

“We’ve been hearing from a lot of our businesses that the restrictions and the need for information to be uploaded to the ArriveCAN app is deterring a lot of people from travelling, which is impeding business, which is affecting our local small- and medium-sized businesses that are dependent on U.S. visitors,” Naidu said.

Naidu also criticized the effectiveness of current COVID-19 vaccination requirements at the border. Given how Canada requires only two doses of a COVID-19 vaccine for admission into the country, he believes the requirement has little effect on limiting the spread of the virus.

The calls from the business groups echo those from border city mayors.

In June, the mayor of Sarnia, Ont., Mike Bradley, said the app has been a disaster and is no longer needed.

“When you’re riding a dead horse, dismount,” he said. “That’s what the federal government needs to do.”

A spokesperson for Health Canada and the Public Health Agency of Canada said the border restrictions in place are the most effective way to stem the influx of COVID-19 and its variants. The agency says processing times for travellers would increase without the app in place.

“The use of ArriveCAN is an efficient mechanism of verifying vaccine certificates in order to grant exemptions from quarantine,” the spokesperson said. “As travel volumes have increased in the spring and early summer of 2022, the use of ArriveCAN has become more important to relieving pressure at the border.”

Inflation in Canada falls to 7.6% in first monthly decrease in a year