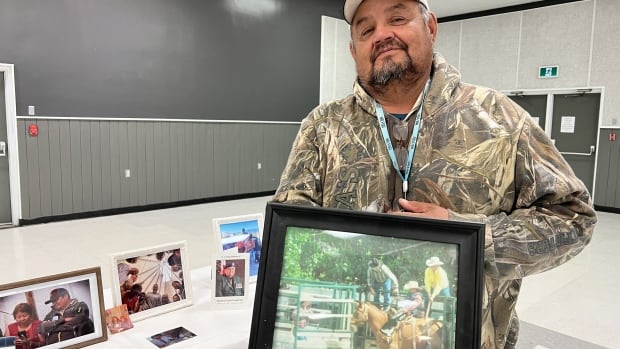 Orlen Burns picks up a photo of his late brother, Earl Burns. There are several on the table, but this one is Orlen’s favourite of the bunch.

It shows a young Earl about to compete at a rodeo — clutching the reins on a horse that’s ready to try and buck him off.

There was a wake for Earl on Tuesday. Family and friends ate soup and baked goods while they told stories of Earl and looked at his photos.

Earl was one of 10 people violently killed on Sept. 4 during a stabbing rampage — Saskatchewan’s deadliest mass killing.

The 66-year-old veteran was from James Smith Cree Nation, where the violence started early in the morning.

Myles Sanderson, 32, the main suspect in the violent attacks on the Cree nation and nearby community of Weldon, Sask., died after going into medical distress shortly after he was arrested last Wednesday. The Saskatoon Police Service is investigating Sanderson’s death and will be supervised by the Saskatchewan serious incident response team.

His brother Damien Sanderson, 31, who was also facing charges in the attacks, was found dead in a heavily grassed area of the James Smith Cree Nation two days after the violence.

Orlen says a family member called him the morning of the attacks to say Earl was dead.

The entire family lives in James Smith Cree Nation, so Orlen got in his truck and drove to Earl’s house to check on him.

On the way, he saw a school bus in a ditch with the motor running — the same bus Earl used to bring kids to school.

Orlen says he ignored it at first and continued, but when no one answered at Earl’s house, Orlen went back to check on the bus. At that point, it was around 7:30 a.m. CST.

“I went to the bus, and I could see him lying on the floor. He was already dead when I went in the bus. He was lying in his own blood” said Orlen.

“I started crying. I burst out in tears.”

Orlen says he believes his brother was stabbed in his own home, then got in the bus to chase after the accused.

“That’s where he took his last breath,” said Orlen.

“At the top of a hill. The bus rolled down, and that’s where he died.”

Orlen says he and his family told police, who were already dealing with another scene in the community. RCMP say there were 13 different total crime scenes.

Orlen says his father, sister and two other brothers found out about Earl shortly after that.

Orlen says he and his brother were close. The children were forced to go to a residential school near Duck Lake, Sask., as children. Orlen’s favourite memories are competing in rodeos, playing hockey and soccer together. The two hunted together, as well.

“He was a pretty good shot, for a guy in the army,” Orlen said with a smile.

Before Tuesday’s wake, Orlen and others went to a vigil in Prince Albert, organized by the Prince Albert Grand Council. About 200 people showed up Tuesday evening to light candles, listen to speeches from about a dozen chiefs, and sing Stand By Me.

“This is a support system that needs to be seen around the world, and especially the people in James Smith and Weldon,” said Sheryl Kimbley, the event organizer.

“We want to always make sure they know when the story dims — when it’s starting to be lost to the world — we will always keep our light on.”

Orlen said the vigil helped him.

“It was good. It calmed me. Because I was pretty angry when I found out he was murdered,” he said.

“We wanted to go look for them, but the police didn’t want us out there. My wife made me stay home. I was walking around with my gun in the house, because he wasn’t caught yet.”

Other families continue to hold funerals.

The services for Bonnie Burns and Gregory Burns, a mother and son, were supposed to be Tuesday. But when Bonnie’s partner, Brian (Buggy) Burns, realized another one of their sons had a birthday that day, he changed it. The community threw a birthday party that day instead, according to Buggy.

“It was very important to be in James Smith Cree Nation today as they laid to rest a beloved community member,” Hajdu wrote in an emailed statement.

“The federal government will be there to support the community as they continue their healing journey. As they’ve told me today, they remain ‘#JamesSmithCreeNationStrong.'”

Indigenous Services has said Ottawa will help the community with things like some funeral costs, hotels and food for people who were displaced due to the violence, and security in James Smith.

Laying a brother and best friend to rest

“Still a little bit ticked off he got the easy way out,” Orlen said of Myles Sanderson.

For now, he’s focused on getting through the next few days. On Wednesday, Earl’s body will be sent back to James Smith Cree Nation for his funeral Saturday morning.

Orlen remembers speaking with his brother recently at their father’s place. Earl was with his two grandsons on quads.

It was a nice visit, Orlen said. The last one they would have together.

“He was a good friend. My best friend.”