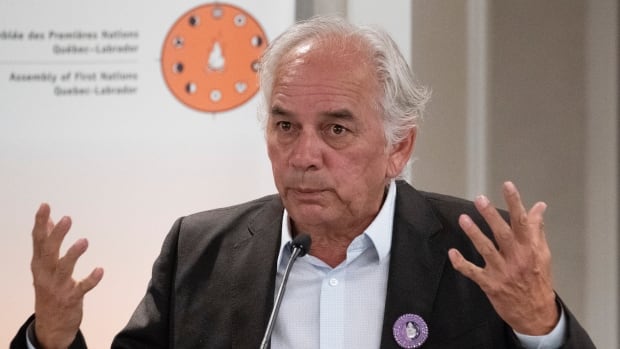 
When Ghislain Picard received a call from the newly elected premier, François Legault, two days after Legault’s Coalition Avenir Québec won the 2018 provincial election, his first reaction was that relations between Indigenous people and the new government had started on the right foot.

“We don’t see that often, so I was kind of encouraged by it,” said Picard, a longtime Innu leader and the chief of the Assembly of First Nations for Quebec and Labrador.

But that sense of optimism was short-lived.

Over the course of its first mandate, the Coalition Avenir Québec (CAQ) tested that goodwill repeatedly, breaking promises in some instances and ignoring the demands and concerns of Indigenous people in others.

Perhaps the most blatant betrayal, in the eyes of First Nations leaders, was Legault’s reversal on a 2018 electoral promise to adopt the United Nations Declaration on the Rights of Indigenous Peoples, which would harmonize Quebec’s laws with the 2007 international agreement.

By 2020, Legault had concluded adopting the declaration would give First Nations and Inuit people too much power over economic projects, which he was reluctant to concede.

“I cannot say today that there’s a sound and positive political relationship with the province,” Picard said, in the final days before the Oct. 3 election.

An apology that rings hollow

In September 2019, the Viens commission — a three-year inquiry into the treatment of Indigenous people by Quebec’s public service — released its report, which included 142 calls to action.

In it, retired Superior Court justice Jacques Viens wrote that “it seems impossible to deny the systemic discrimination members of the First Nations and Inuit face in their relations with the public service.”

Legault moved quickly on the report’s first call to action, apologizing to First Nations and Inuit people in Quebec in a lengthy address to the National Assembly.

The government “has to absolutely avoid imposing solutions” on Indigenous communities, Legault said in his apology. But he stopped short of acknowledging that Indigenous people face systemic discrimination.

That denial is at the heart of what remains the CAQ’s “totally paternalistic” relationship with Indigenous peoples, Picard said.

“This all falls back to a situation where the government is deciding for us,” said Picard, describing the CAQ government as taking “still very much a colonial approach.”

The CAQ government’s resistance to the concept of systemic discrimination was underscored in 2020, when Legault again denied the role it may have played in the death of Joyce Echaquan, an Atikamekw woman who filmed her abuse by health-care workers.

In November 2020, Echaquan’s widower, Carol Dubé, and the Atikamekw leadership presented the Quebec and federal governments with Joyce’s Principle, a call to guarantee Indigenous people the right to equitable access to social and health services and the right to enjoy the best possible physical, mental, emotional and spiritual well-being.

The CAQ government rejected pressure to adopt it because, although Indigenous Affairs Minister Ian Lafrenière said it was taking initiatives to fight racism, it would not recognize systemic racism.

However, systemic discrimination is alive and well, and not just in the health-care network, says Emily Roberts, a councillor with the Mi’kmaq Gespeg Nation, whose members are spread throughout the Gaspé Peninsula.

Roberts points to the example of Bill 96, the CAQ government’s contentious overhaul of the Charter of the French language passed earlier this year, which requires anyone entering an English-language CEGEP to take five French-language courses in order to graduate. For Indigenous people for whom French is often a third language, the requirement is seen as yet another barrier to success.

“It’s not up to a provincial government to tell us how we transmit our culture and to put more obstacles in our way when it comes to doing that because it is already extremely difficult,” said Roberts.

“It’s very difficult to build a relationship with them when such a fundamental notion [as systemic racism] is just ignored.”

Another point of contention is Quebec’s decision under the CAQ to mount a court challenge of C-92, a federal law passed in 2019 that gives First Nations, Métis and the Inuit autonomy over the treatment of their children in the foster care system.

The CAQ agrees that Indigenous people are best suited to take charge of their own children, party spokesperson Mathieu Durocher told CBC News in a statement, but Quebec is challenging the federal government “unilaterally imposing its way of doing things.”

Yet the legal challenge has had repercussions on Quebec’s relations with Indigenous communities.

Peggie Jerome, the executive director of Mino Obigiwasin, an agency mandated to offer Anishinaabe family services in Val-d’Or, Que., said she, for one, won’t be voting in the Oct. 3 election. To her, the court challenge of C-92 is just one more demonstration of Quebec’s unwillingness to support Indigenous people’s autonomy.

‘The world has evolved’

In November 2021, Quebec launched a video campaign, at a cost of nearly $1.1 million, which aimed at normalizing the presence of non-white people in the province. Indigenous people were noticeable by their absence.

The video was one of the measures taken by Benoit Charette, appointed minister responsible for the fight against racism in February 2021, following recommendations from Quebec’s anti-racism task force.

Durocher, the CAQ spokesperson, said the party has plans to release a second campaign specifically focussed on Indigenous people, with input from Indigenous representatives.

Picard said he has yet to meet with Charette nor to see any concrete commitments from him.

Picard says if the CAQ are re-elected — and polling suggests that is likely to happen — the party could still mend its relationship with Indigenous peoples in the province. He suggests a good start would be the creation of a special parliamentary commission.

“We’ve seen that when René [Lévesque] was premier,” Picard said. “We can do it again. Because in 40 years, the world has evolved, and I think Quebec has to, [as well].”