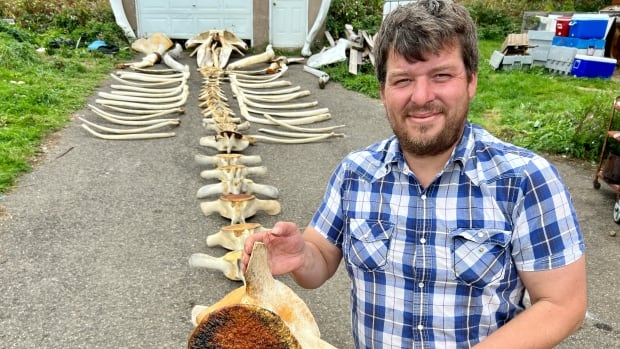 
Jess Tudor of Brier Island in Digby County, N.S., has collected whale bones for years, but he took bone hunting to a new level over the summer.

The proof is laid out in his driveway overlooking the Bay of Fundy: 150 bones from a dead juvenile humpback whale he first spotted in the water in early July.

The whale was beginning to decompose and it took several days before it finally washed ashore.

“The biggest problem I had was just getting access to the beach where it washed up because you have to go through people’s land,” said Tudor.

And removing the bones was no easy job.

“It was probably about two and a half kilometres each way from the road so it was a five kilometre round trip each time,” said Tudor, a lobster fisherman who grew up on Brier Island. “There were some days I’d put in three trips because I thought I was going to lose the carcass due to the tides.”

Tudor says he had to do a lot of cutting through thick, rotting flesh to remove the bones. On hot days, the stink made the task almost unbearable.

He was able to remove all the ribs, spinal and scapula bones, loading them into an old hockey bag and carrying them to the road.

But the whale’s skull was just too big.

Weighing close to 150 kilograms he needed the help of a boat equipped with a hydraulic lift to get the skull off the shoreline.

Once the skull was moved to a wharf, it was hoisted to the top of his wife’s van. Amy Tudor was out on the water at the time, working with Mariner Cruises Whale and Seabird Tours.

“With my husband nothing surprises me,” she said. “Most women get flowers and jewelry but I get whale carcasses and whale skulls on my mini van when I get back from work.”

Jess Tudor’s love of bone collecting comes from his mother, owner of the Brier Island Lodge.

A flower bed at the lodge is surrounded by whale bones and its front steps are bordered by two large humpback jaw bones.

“Growing up here on Brier Island you are surrounded by nature and from a young age we were always used to whales, seals and even sharks,” said Virginia Tudor. “It’s part of our life, it’s part of living by the ocean.”

Jess Tudor will continue to dry the bones in his driveway for the next few months.

He used a pressure washer to clean them but some vertebrae still need more work before they can be added to the unique driveway display.

Tourists have been dropping by to take a look at the skeleton, including Manuel Wassermann from Germany.

“We were driving to the northern lighthouse on the island and then my partner said ‘we need to stop here’,” Wassermann said. “We thought maybe it was an elephant skeleton or something like that so we just parked right around the corner.”

Because one of the scapula bones is missing a large chunk, Tudor believes the whale was hit by a propeller from a large vessel.

He wants to piece together the skeleton into a form of educational art.

Tudor would like to see the skeleton honour the memory of Joe Howlett, a member of the Campobello Whale Rescue Team in New Brunswick who died while saving an entangled North Atlantic Right Whale in 2017.