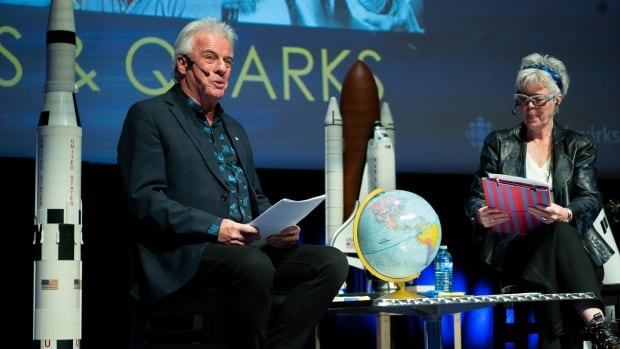 Bob McDonald looks back at 30 years of hosting Quirks & Quarks

The hair has turned grey and the voice has mellowed, but after three decades, I still enjoy hosting our weekly national science radio program. It is the “quirkiest” and longest job of my life.

Walking into the Quirks & Quarks office in 1992 was an intimidating experience. I was following in the footsteps of hosts David Suzuki, Jay Ingram and David Mobray — all very well respected science journalists.

The show had already been on the air for 16 years and was a well-oiled machine that was missing a gear. It was the first time that I was filling someone else’s shoes. I never thought at the time that I would still be standing in those shoes three decades later.

My previous job had been hosting CBC’s children’s television program Wonderstruck, and the transition to a radio program aimed at adults was a steep learning curve.

WATCH: Bob McDonald in an excerpt from the CBC-TV science show for kids, Wonderstruck (1991)

On his way to helming Quirks and Quarks, McDonald hosted a CBC-TV children’s science show called Wonderstruck. Here’s a clip from 1991 that features an amazing piece of new tech.

In kids’ TV we were free to take any topic and make it fun and understandable for young people. But Quirks & Quarks is guided by the breaking science news of the week: Publications in scientific journals, news from universities and research labs, a wide assortment of topics in every field of science.

Suddenly I was faced with the intimidating task of learning about subjects far outside my expertise such as mad cow disease, otherwise known as bovine spongiform encephalopathy: a scary, degenerative fatal brain disease whose appearance was a big news story in 1992.

It took a day just to learn how to pronounce those words, let alone understand how the disease ate away at the brains of cows and the (thankfully few) human victims it ultimately affected.

‘Let me see if I’ve got this right’

Because of our efforts to keep up with emerging stories, to this day I don’t have any idea of what topics I will be dealing with from week to week. But very early on I learned the secret to hosting the show: it’s all about listening.

All journalism is storytelling. Regardless of the topic, all stories have the same elements: a setting, characters, some kind of action, and either a conclusion or progress to the next step.

You don’t need to know everything there is to know about a subject such as genetics to do an interview (although a basic understanding helps). You just focus on that particular guest’s story.

If they become bogged down in the details, I throw in what has become somewhat of a trademark phrase: “Let me see if I’ve got this right…” where I try to summarize what they have just said, as simply as possible, usually with an analogy thrown in to help make it understandable to the audience.

During a conference at one of our Canadian universities, a scientist who had been on the show confided in me when he said: “In our lab, we have a challenge if we are on Quirks & Quarks to get through an interview without you saying ‘Let me see if I’ve got this right.’ Because if you say, that it means we have failed to communicate clearly.”

I didn’t realize I had set a bar.

Documenting history, one interview at a time

And what stories we have covered over the past 30 years. 1992 saw the Earth Summit in Rio de Janeiro, where world leaders gathered to engage with the issues of climate change and loss of biodiversity.

Since then there have been 26 UN climate summits (or COP meetings), but global carbon emissions are still on the rise. We have seen predictions made by scientists of ice loss, more powerful storms, increased droughts and wildfires all come true. Climate change is no longer a thing of the future.

The first exoplanet was discovered during my first season. Now the number of planets found orbiting other stars has passed 5,000. And speaking of planets, we have sent robots to every planet in our solar system including Pluto, which was controversially demoted to “dwarf planet” status.

Bob McDonald, the host of CBC’s Quirks and Quarks, sits down with Peter Mansbridge to answer science questions submitted by viewers

Technology has changed immensely in 30 years. The International Space Station did not exist in 1992. Our offices were just beginning to have computers, and there was this new thing called the internet.

We have covered the big stories such as the cloning of Dolly the sheep, the mapping of the human genome, the discovery of the Higgs Boson. We’ve looked at the unusual sex lives of insects, and exotic behaviour of particles in the quantum world.

Astronomers learned that the universe is not only expanding, it is speeding up, due to a mysterious phenomenon dubbed dark energy.

They also continue to investigate the fact that much of the universe appears to be made up of invisible dark matter.

Those two elements, dark energy and dark matter, turn out to comprise 95 per cent of the matter and energy in the universe — and we still don’t know what they are.

As our motto says, “We cover every aspect of science, from the quirks of the expanding universe to the quarks within a single atom … and everything in between.”

People often ask what my favourite interview has been. It’s difficult to answer, because over the past 30 years I have spoken to more than 7,000 guests, so how do I pick just one?

Is it the famous astronomer Carl Sagan who I admired greatly, or the latest Nobel Prize winner? It could be any one of our Canadian astronauts, or someone doing important research on COVID-19.

For his profound contributions to science, Canadian scientist John Polanyi receives the Nobel Prize in Chemistry.

Our producers managed to intercept the group, inviting them to discuss the future of science in their fields.

There I was, sitting across the studio table from six men (sadly, there were no women) in tuxedos, each the winner of the Nobel Prize in Science. I still remember the feeling of awe and joy that I felt to be in that room.

After three decades of hosting Quirks, I still enjoy going to work every week. The subject matter is always new, interesting and it keeps me abreast of where we are in our understanding of the fundamental process that governs the universe, and therefore our lives.

I would like to thank all the scientists who have been generous with their time and shared their stories with us. We can’t do the show without you.

It has been an amazing journey of discovery.– Bob McDonald

I am also deeply indebted to the producers who do the heavy lifting on the show. They find the stories, chase down the scientists, do pre-interviews to focus the story, gather the research, and work on the scripts and questions with me.

By the time you hear my voice on the radio, you are really hearing the work of a group of very talented and knowledgeable people. I stand on the tip of an iceberg that is the huge intellectual capital known as the CBC. It is a supreme privilege to be part of that community.

Finally, thank you to the audience for supporting our program for more than 45 years on the air. Our ratings have consistently made us one of CBC Radio’s most popular programs. And should we ever slip up and make a mistake, you are right on us to point it out.

It has been an amazing journey of discovery. And considering how much there is yet to learn about the universe, I’m honoured to have the chance to continue to bring those stories to you.