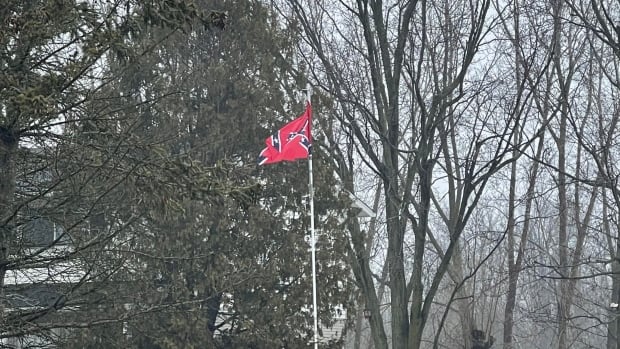 Black drivers who saw this Confederate flag in London, Ont. have a message for homeowner


Some members of London’s Black community are reacting after a Confederate flag was seen flying prominently on a rural property south of Highway 402.

Trish Kiwanuka spotted the flag while driving on Wednesday and was shocked to see it on its own 10-metre tall flag pole in the middle of a lawn beside a two-storey house.

“It just made my heart stop,” said Kiwanuka. “As a person of colour when you see a symbol of white supremacy from an era when Black people were owned as slaves, it kind of makes you feel nervous.”

The Confederate flag, with its blue cross and white stars over a red background, has a complicated history. It was flown during the Civil War by the secessionist states, notoriously by General Robert E. Lee’s army that fought to preserve slavery.

But it has also been used by hundreds of extremist groups across the southern United States, including the Ku Klux Klan. And there have been fierce debates in the United States in recent years about flying the Confederate flag, including outside government buildings.

For many racialized people, the flag symbolizes a period of U.S. history where hatred and racial violence was accepted, and as a symbol for those who fought to retain slavery and racist oppression.

Despite this, the flag continues to be flown, and some who choose to fly it justify it as a symbol of independence from government or rural pride.

Kiwanuka says she can’t help but be curious about why someone would choose to fly the Confederate flag when it represents oppression for so many people of colour.

“I try to give them the benefit of the doubt, maybe they don’t know,” she said. “Maybe they like the way it looks. But there is a long history of hatred behind that as a symbol. If you don’t know why you’re flying the flag, you’d better do your research before you come across as a bigot or someone who is perpetuating hate.”

On Thursday, CBC News visited the south London property where the flag was flying. A woman who answered the door said the flag “doesn’t mean anything” and didn’t want to comment further. Minutes later, a man was seen taking down the flag and removing the pole from its concrete base. He also refused to comment.

Darryl Rochard is a member of the Black Lives Matter network in London. He was driving with his daughter when they spotted the flag.

Rochard said the person has a right to display it but like Kiwanuka, he can’t help but wonder about its owners’ motive for choosing to fly it.

“This particular individual has decided to display a flag that is connected to a very dark history and something that we recognize as being a hateful symbol,” he said.

Rochard said seeing the flag makes him feel “uneasy and uncomfortable” but he’d also like to have a constructive dialogue with any person who chooses to fly it.

But he has seen it flown from vehicles in the city, most recently during the so-called “freedom convoy” protests against COVID-19 vaccination mandates.

Like Rochard and Kiwanuka, seeing the flag causes Lambert no small amount of unease, particularly when he saw the Confederate flag on a vehicle that was also flying a Canada flag.

Lambert works at United Kutz, a barbershop in downtown London with a large Black clientele.

“I mean when you see a convoy of truckers going through downtown London and you see the flags waving and you see the horns blaring …. it’s kind of threatening. I’ve been raised to be cautious about stuff like that. If they had set up here we’d have to close up the shop because we’d be fearful for a lot of our clients coming in here and having to go through all that.

“Some of them flying that flag are fighting for different reasons, we don’t know if those reasons are against us.”

Mobile phones, makeup and sex toys flushed down the toilet