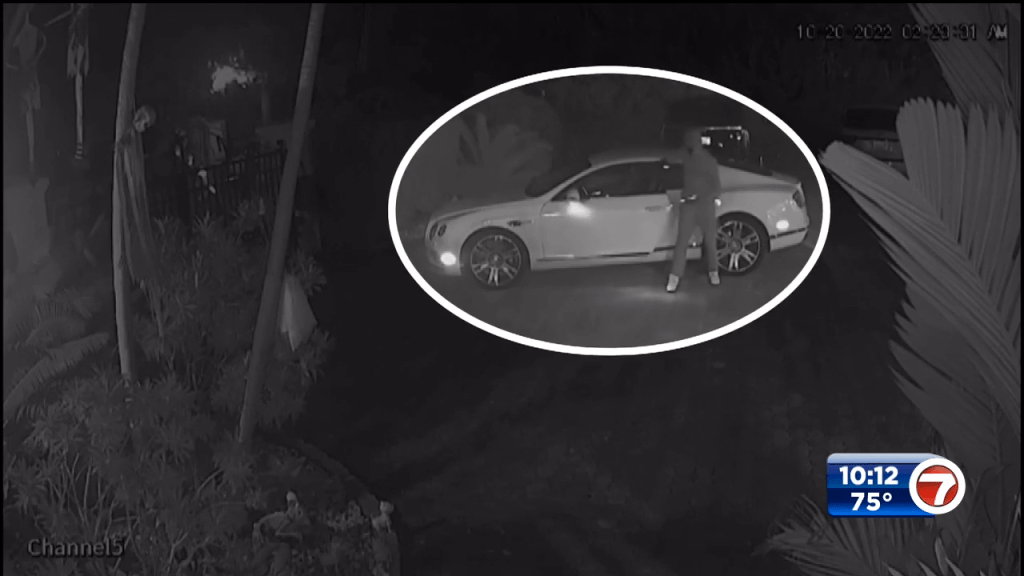 
MIAMI BEACH, FLA. (WSVN) – A Bentley was boosted by thieves in front of a South Florida home, and that ride belongs to a well-known sports agent that Dol-fans are sure to recognize.

Thursday morning, a group of grand auto thieves went to work, as seen on surveillance video, provided exclusively to 7News.

One of the most famous sports agents in America, who also appears weekly on 7Sports Extra is now a Miami Beach crime victim.

“How crazy is this?” said Drew Rosenhaus. “They have to be stopped.”

But these bold crooks can’t be stopped here.

“You can clearly look at the video of them breaking in and stealing the car,” said Rosenhaus. “Three people, there’s a Mercedes-Benz that’s driving behind my car on the video, they went through the security gate. I’m glad that I’m a person of note-oriety who can bring attention to this. I’ve been told by Miami Beach Police that there’s a rash of these robberies, burglaries taking place.”

Law enforcement sources said a similar crime happened overnight in the area of Hibiscus Island, one of several spots targeted by crooks across Miami Beach.

It was a car similar to Rosenhaus’, but for some reason, the burglars left the car running and unattended.

Officers said the vehicle almost stolen was unlocked and had the keys inside.

Other such car crimes have been perpetual problems across sections of Mid-Beach and on Palm and Hibiscus Islands.

“Things like this just can’t happen,” said Rosenhaus. “I lost a very dear friend of mine, Sean Taylor, when people broke into his house and didn’t know he was there and then shot and killed him.”

“With my wife and kids. I was not aware this was happening until the police came into my home, but if I had any inkling that they were breaking into my car, I would’ve gone out there with my firearm, and I don’t know what would’ve happened at that point,” he said. “I’m gonna protect my family at all cost.”

Luckily, there was no confrontation, but this jet-setting super agent is without wheels.

“If these robbers are out there, know I’m coming for you,” said Rosenhaus. “I’m gonna do everything within my power to get you. You mess with the wrong person, wrong family, the wrong neighborhood, we’re gonna put you behind bars.”

Keys left in vehicles only make these crimes easier for the criminals. Unfortunately, this is the case in most vehicle theft incidents.

If you have any information on these car thieves, call Miami-Dade Crime Stoppers at 305-471-TIPS. Remember, you can always remain anonymous, and you may be eligible for a reward of up to $5,000.

Man dies after being hit by truck, officials say