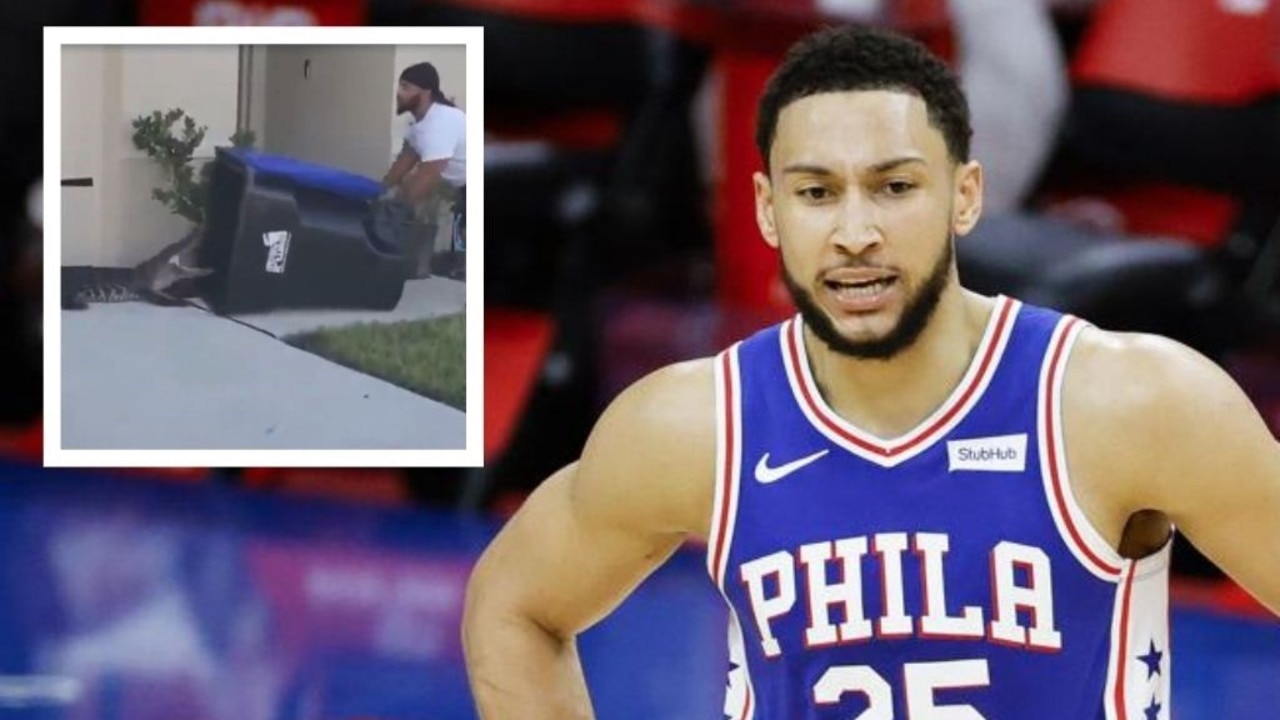 Ben Simmons has been attacked from all angles but this insult from an NBA fan who caught an alligator in his bin will hurt just as much.

Ben Simmons is copping it from absolutely everywhere.

From NBA pundits to fans to people who have become famous for trapping alligators in their garbage bins, the Aussie basketball star can’t escape criticism.

Simmons is trying to force a trade away from Philadelphia, upset at the scrutiny he’s been under since his disastrous offensive performances in a series loss to Atlanta during last season’s playoffs.

He’s boycotting pre-season camp, adamant he doesn’t want to suit up for the 76ers again or share the floor with All-Star centre Joel Embiid. And Simmons’ holdout is infuriating the people of Philly.

Eugene Bozzi provided internet gold when footage was captured of him trapping an alligator near his house in a garbage bin, before releasing the animal into a waterway.

He became a local media sensation and when interviewed on TV by CBS Philadelphia about his alligator escapades, took a pop at the city’s least favourite baller.

“I just jumped into action and I said, you know what, I’m not going to be Ben Simmons. I’m going to get me this basket,” Bozzi said, taking aim at Simmons’ shooting ability — or lack thereof.

The CBS anchor cracked up and plenty of viewers loved it too. The one-liner went viral and a clip of the interview was viewed more than 183,000 times when uploaded to social media by the popular NBA Central Twitter account.

Simmons and the 76ers remain at an impasse because the franchise hasn’t been able to agree to a trade package with any other teams it believes compensates it fairly for the loss of a three-time NBA All-Star.

Speaking on SEN’s Breakfast with Garry and Tim on Monday, Bobby Marks of ESPN said the saga could drag on into “early December”.

“He’s (Simmons) gonna be home (in Philadelphia when the season starts),” Marks said. “I think he’ll be home, he’ll still have the Sixer name attached to him.

“I don’t think he’s gonna be traded by the time the season starts.

“I think it gets dragged into mid-November, maybe even into early December.

“But I still think he’s gonna be a Sixer when we get going in a couple of weeks.”

Meanwhile, the 76ers withheld a payment of $11.4 million to Simmons as he refuses to join in pre-season activities. He’s already received the first 25 per cent of his contract worth this season but the Sixers are refusing to give him the second 25 per cent — or $11.4 million — because of his boycott.

The ongoing drama comes after Embiid dropped some truth bombs on the 25-year-old.

“Even going back to the reason we signed Al, we got rid of Jimmy, which I still think was a mistake, just to make sure he (Simmons) needed the ball in his hands and that’s the decision they made.

“The situation is disappointing, borderline kind of disrespectful to all the guys that are out here fighting for their lives.

“We are a better team with him, there’s no question about it. We still hope he changes his mind, but I kind of owe it to these guys to worry about what we have here.”